Tefnut: the ancient Egyptian goddess of water and moisture

Often regarded by ancient Egyptians as one of the first gods created by Ra at the beginning of time, Tefnut was a very important goddess. As the goddess of water and rain, she was revered for her role in making the land of Egypt fertile and prosperous. Her importance is reinforced in the fact that she was a member of the famous nine Ennead gods in Heliopolis.

Birth story and the meaning of her name

Tefnut’s name when translated to English is “That Water”. In some cases, her name means ‘to spit out’, a reference to her being the mother who gave birth to Geb and Nut. It can also be a reference to how Ra created her. It was believed that Ra literally spat her out from his mouth.

In almost all the stories about her birth, the underlying theme seems to be the asexual form of reproduction. Thus the sun god Ra (or Amun) single-handedly gave birth to both Tefnut and Shu. In one account of the story, Tefnut and Shu were born after Ra sneezed.

Ancient Egyptians believed that Tefnut was the twin sister of Shu. After their births, the two deities fell in love and got married. Their union produced two deities – Nut (the goddess of the sky) and Geb (the god of the earth). What this means is that Tefnut is the grandmother of famous Egyptian deities such as Osiris, Set, Horus the Elder, Isis, and Nephthys.

Also, she is part of the Ennead of Heliopolis – a group of nine famous gods who were fervently revered in ancient Egypt. 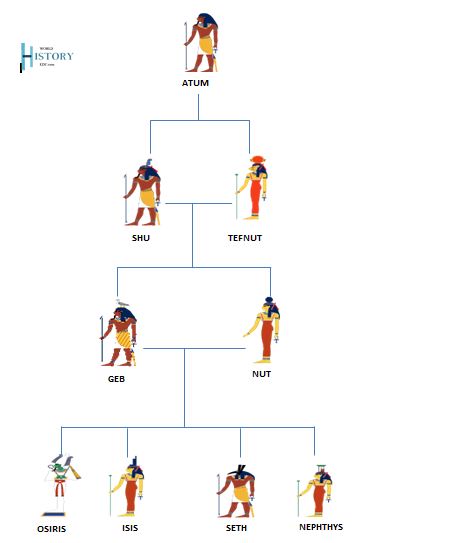 Tefnut area of control included moisture, heaven, hell, time, justice, and order. In addition to this she was regarded as both the left and right eyes of Ra.

In some cases, Tefnut gave a hand to her husband/brother Shu in holding up the sky (Nut). It was also believed that her tears were what made the land of Egypt so fertile.

As a goddess of death, she was one of the judges that determined whether a soul was fit to go into the afterlife or not. As a result of this, she can be seen wearing the Sun disk, an Egyptian symbol of power.

In that vein, many believed that she was involved in the weighing of the hearts of the dead souls in the underworld. In this role of hers, many Egyptians took to associating her with Ma’at, the goddess of law, order and justice.

Tefnut is generally depicted as woman with a lioness’ head. And atop her head is the famous Sun disc (a symbol of fertility, power and judgement) along with the uraeus serpent (a symbol of protection).

As it was common with most Egyptian deities, Tefnut usually carried a scepter (a symbol of power) and the ankh (the Egyptian symbol of life).

Her association with lions came after she left Ra and exiled herself to Nubia. In the absence of Tefnut (i.e. water), the land of Egypt was believed to have been ravaged by drought, diseases and starvation. Worried about his daughter’s whereabouts, Ra sent a number of deities to bring Tefnut back to Egypt. However, none of those deities could convince Tefnut to make a return. Therefore, Ra sent the Thoth, the god of wisdom and writing, to bring her back. Being the so wise and very soft-spoken, Thoth was able to persuade the goddess to return to Egypt.

The Egyptians celebrated Tefnut’s return by dinning and offering sacrifices to the gods. Following her return, Egyptians started depicting her with a head of a lioness.

Also known as the key of life, the ankh was an ancient Egyptian hieroglyphic symbol for life or breath of life

Her worship was widespread; particularly in Leontopolis (May-ta-hut), she was worshiped in her lion form.

Tefnut’s worship was also common in the city of Denderah (Iunet). So widespread was her worship that the city was sometimes called ‘The House of Tefnut’

Other interesting facts about Tefnut