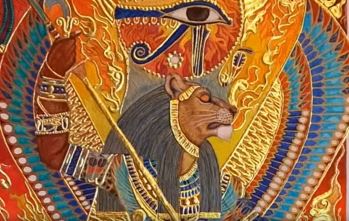 With epithets such as “The One Before Whom Evil Trembles”, Egyptian warrior goddess Sekhmet was feared primarily because of her lust for bloodshed. At the same time, the ancient Egyptians believed that she had numerous healing abilities. Many Egyptian pharaohs even prayed to her for protection in both this life and the afterlife. As the daughter of the sun god Ra, Sekhmet, “The Lady of Life”, was part of a collection of sun deities that embodied the Eye of Ra. 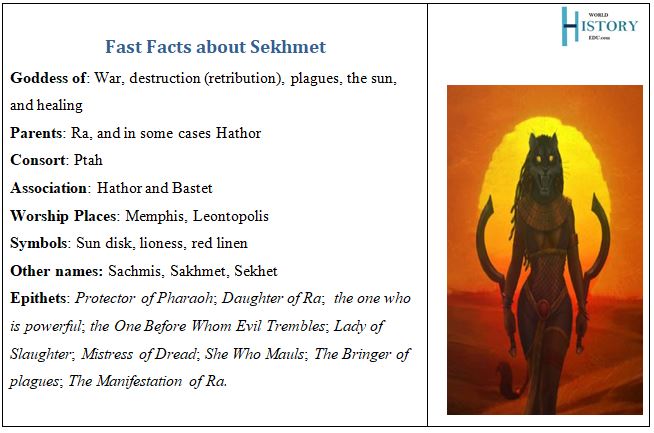 Sekhmet’s name was derived from the word sḫm, which translates into “power or might”. The Egyptians believed that she was one of the later daughters of Ra, the creator sun god. In the myth, Sekhmet sprung to existence after Ra gazed upon the earth.

Commonly referred to as the violent and aggressive manifestation of the Eye of Ra, Sekhmet had a sister called Hathor. Unlike Sekhmet, Hathor was a gentler, peace-loving goddess.

For some ancient Egyptians, Sekhmet was seen as the wife of Ptah, the ancient Egyptian god of craftsmen and architects. Many myths also state that she was the mother of Nefertum, the beautiful lotus flower that rose from the primordial waters at the beginning of creation.

She was an extremely important sun deity in ancient Egypt. In many cases, Sekhmet was considered the divine manifestation of Ra’s power. She was also Ra’s tool of vengeance. She possessed a warrior-like spirit that frightened the Egyptians.

The ancient Egyptians believed that she had dominion over plagues and natural disasters. It is for this reason why she was called “The Bringer of Plagues” (i.e. The Lady of Pestilence). And whenever the people of Egypt defied either her or Ra, Sekhmet would unleash immense havoc and suffering on the people.

The myths go on to state that whenever she breathed out, fire came out. Her breath was like the hot winds that blew from the desert.

Regardless of her destructive sides and features, Sekhmet was venerated for her healing and protective prowess. She is believed to possess the antidote to every illness and plague. Many believed that she had the power to solve every problem that befalls mankind.

It was believed that Hathor turned into Sekhmet whenever Ra sent Hathor to earth. Hathor was the other daughter of Ra. Unlike Sekhmet, Hathor was calmer and often seen in good light by the Egyptians. However, when it came to doing the dirty work (i.e. vengeance) or say restoring order and justice in the land, Ra’s tool of choice was none other than Sekhmet. For this reason, she got the titles, “the Protector of Ma’at” and “The One Who Despises Evil”.

How Sekhmet almost wiped out the human race

In one incident, it was believed that Ra had gotten frustrated with mankind’s insolence and transgressions against the principles of Ma’at. The sun god unleashed Sekhmet (The Destroyer of Rebellion) upon the earth in order to teach humanity a painful lesson. The myth goes on to say that Sekhmet killed every one of Ra’s conspirators, leaving the land of Egypt in a pool of blood.

Such was her unquenchable thirst for blood that Ra feared she would kill every living soul in Egypt. Ra devised a plan to halt Sekhmet’s carnage. He asked the people of Egypt to dye the River Nile with red dye (most likely pomegranate). He then asked them to pour copious amounts of beer into the river. By so doing, the river came to resemble blood. Upon seeing what she thought was blood, Sekhmet jumped straight into the river and consumed it voraciously. She later became drunk and returned pensively to Ra’s abode. 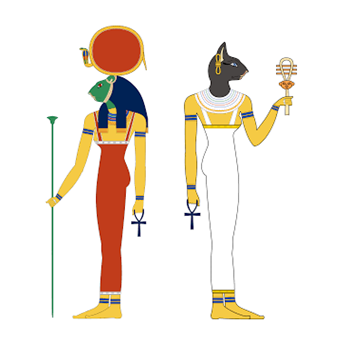 Even though Sekhmet was commonly associated with Bastet, Sekhmet was way more volatile, fiercely unpredictable, and destructive than Bastet. | Image: Sekhmet (left) and Bastet, the Egyptian cat goddess of protection, fertility and music

Sekhmet was considered a member of famous Egyptian solar deities that represented the Eye of Ra. The group included deities such as Hathor, Mut, Horus, Hathor, Wadjet, and Bastet.

Subsequently, they made merry and danced throughout the night. Aside from it being a thanksgiving-sort of festival, the Egyptians also used the festival to ask for Sekhmet’s divine blessings and protection against plagues and evil spirit.

It was also around this time that the color of the Nile changed into a red color. This was primarily due to all the upstream silt that was produced at that time of the year.

Sekhmet’s major cult center was at Memphis. And often times, she was worshiped along with her husband Ptah and her son Nefertum. Those three were regarded as the Memphite.

In ancient arts and sculptures, Sekhmet was depicted as a woman with a lioness head. Atop her head was a sun disk and the uraeus serpent. A powerful and aggressive lioness, she usually had a constant desire for destruction.

The ancient Egyptians picked the color red for Sekhmet; hence, we see many of her depictions in red, i.e. the color of blood. Unlike other Egyptian goddesses, she was sometimes shown with little or no clothing. As it was typical of Egyptian gods and goddesses, Sekhmet can be seen holding the ankh (Egyptian symbol of life) and the scepter (symbol of power and royalty).

Some of her common epithets include,  The Daughter of Ra;  the One Who is powerful; the One Before Whom Evil Trembles; Lady of Slaughter; Mistress of Dread; and She Who Mauls. As a result of her healing abilities, she has been sometimes called “The Gracious One”.

As a solar deity, Sekhmet was one of the deities that ancient Egyptian pharaohs called upon for protection. As a result, her name was commonly invoked during the embalming rites. Additionally, when a dead pharaoh was being buried, the Egyptians would often place several hundreds of Sekhmet statues and symbols in the tomb. The funerary temple of New Kingdom pharaoh Amenhotep III (ninth pharaoh from the 18th Dynasty) for example had close to a thousand statues of Sekhmet.

Being a warrior goddess, Sekhmet was often prayed to by Egyptian generals and pharaohs before battles. They would call on her to grant them enough might to lay waste to the enemies of Egypt. 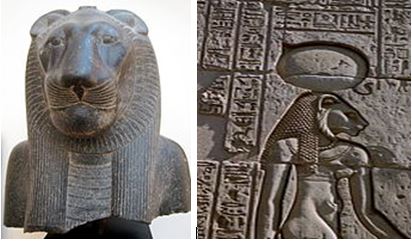