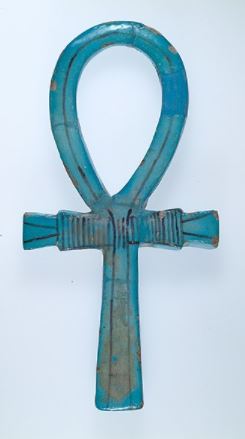 The ankh symbol was ubiquitous in the life of ancient Egyptians as it was often used during religious rituals and funerary ceremonies. Also, the Egyptian rulers were said to rely on this symbol in various aspects of their lives and areas, be it social, cultural, religious or recreational,

Meaning of the ankh symbol

An ancient Egyptian hieroglyphic symbol, the ankh was believed to be the embodiment of life. This explains why the symbol was sometimes known as the “key of life”.

How famous was the ankh?

Along with the djed (a symbol of stability) and the was scepter (a symbol of royal power), the ankh symbol ranks up as one of the most famous ancient Egyptian symbols. This symbol is said to evoke the concept of life and sustenance. Not only does it apply to the realm of the living, but it was also used to symbolize everlasting life and blissful afterlife. In ancient Egyptian religion, death was not the end as the soul of the dead was believed to make the journey from the land of the living to the afterlife. As a result, the symbol held a very important spot in the hearts of the ancient Egyptians.

The ankh symbol was believed to be the gods’ promise of an eternal life after death | Image: The falcon-headed god Horus offers life (i.e. the ankh symbol) to Ramesses II.

Ancient Egyptians used the ankh symbol in writing and in a plethora of art as it represented the word “life”. In some cases, however, it was used in writing to represent words such as “sun”, “air” or “water”.

As a symbol of eternal life and immortality, the ankh was usually shown on the walls of temples, sarcophagi, tombs of pharaohs and other ancient Egyptian religious structures. Placing the ankh in sarcophagi meant that the deceased person would be able to resurrect and live happily in the afterlife.

The ankh and the Sun

To the ancient Egyptians, the sun was the bringer of life and the vital force that sustained everything in the cosmos. This explains why many ancient Egyptian gods were generally depicted holding the ankh. It was believed that anyone that held the ankh had access to the origin of life and existence.

Ankh symbols also evoked the concept of duality – male and female; earth and heaven; and sun and moon so to speak. Its looped top symbolized the eternal life that awaited all living humans after their death.

Although it remains a bit unclear as to the origin of the ankh symbol, some Egyptologists have stated that it probably came from the ‘knot of Isis’ (also known as the tjet/tyet), a symbol for protection and fertility.

The first known use of the ankh symbol dates back to the First Dynasty of Egypt (around 2900 BCE). However, it is unknown what concepts the symbol represented back then.

The ankh symbol, or in some cases the ankh and the djed, were inscribed on sarcophagi, paintings on the walls of tombs, statues and obelisks.

Such was the popularity of the ankh, a symbol which dates back to the late 4th millennium BCE, that the early Christians adapted it around the 4th century CE.

Owing to their belief that the sun was the embodiment of the sun gods such as Ra and Amun, it was also not uncommon for the Egyptians to relate the symbol to the sun.

Ancient Egyptian ankh, also known as the ‘source of life’ or ‘the key of the Nile’ – a symbolized both life in the land of the living and eternal life in the afterlife.

Many of the ancient Egyptian gods were depicted holding the ankh, particularly Isis, the goddess of fertility, healing and motherhood.

The ankh symbol held a very important place in ancient Egyptian religion and daily life. Not only did it evoke the concept of life, it was also sometimes related to the concepts of death, love, and power. For example, ancient Egyptian gods and goddesses were often depicted holding the symbol to demonstrate the immense power they had not just in the land of the living but also in the afterlife.

Moreover, ancient Egyptian rulers were commonly shown holding the symbol, a representation of the power they had over the land.

Other interesting facts about the ankh

In other neighboring cultures in the region, the ankh was seen as a decorative symbol.

Early Coptic Christians adapted the ankh symbol into the crux ansata, which ultimately became a variant of the Christian cross.

Aside Egyptian gods and pharaohs, it was very rare for an ancient Egyptian to be depicted holding the ankh symbol. The symbol was believed to be the preserve of the gods and their physical manifestations, the Egyptian pharaohs. Those two groups were believed to have the power to bestow life.

You may also like: 12 Most Famous Ancient Egyptian Cities