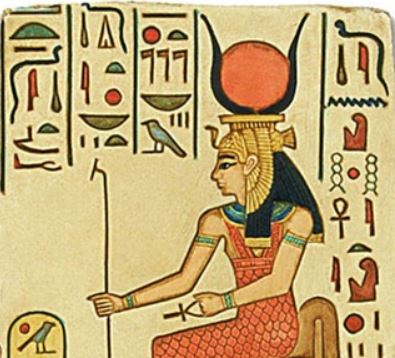 Hathor, the Egyptian cow goddess, was one of the leading goddesses in ancient Egyptian religion. She was revered as the goddess of sky that sprung out from Ra’s (the creator sun god) right hand at the beginning of creation. For this reason, she was typically seen as either Ra’s daughter or Ra’s consort.

The article below provides a quick look at the Egyptian goddess Hathor, the sky goddess of fertility, love and happiness.

What was most likely a cattle goddess has been seen on sculptures from the Pre-dynastic era in Egypt (before  3,100 BCE). Like many ancient cultures, the Egyptians held cattle in high esteem. They often saw the animal as a symbol of wealth and motherhood, providing them with food and milk for nourishment.

In those Pre-dynastic Egyptian artworks, Hathor’s name is not explicitly mentioned. However, her name starts to appear around the Old Kingdom era (27 BCE – 22 BCE). What is interesting is that cow deities in the Pre-dynastic era had horns curved inward. However, Hathor’s horns in the Old Kingdom era were typically curved outwards. It was also around this era that Hathor’s worship became pronounced in Egypt. She absorbed Pre-dynastic Era deities such as Bat into her cult.

Hathor was venerated as the consort of Ra and in some case Horus. In that role, she also served as the cosmic mother of the universe. This made her the mother of Egyptian pharaohs. Hathor’s name means “The House of Horus”.

Depictions and Symbols of Hathor

This sky goddess was depicted in a number of different forms. She has been depicted with a human body with two cow horns and a sun disk as her headdress.

In some cases, Hathor is depicted as a sacred cow. This allowed her to perform her role as a nurturing mother. Her association with cows also reflects her status as being the goddess of well being and precious items. It is for this reason why she was often associated with treasures and mining areas. As a matter of fact, one of Hathor’s titles was “the Golden One”. This was also partly in reference to her association with the sun.

As it was common with Egyptian deities and royals, Hathor is generally depicted with the ankh, the Egyptian symbol of life and royalty. Other minor symbols of Hathor are a lion, a papyrus, a sycamore tree,  a cobra, and a vulture.

Hathor became a mainstay goddess amongst the Egyptians starting around the second millennium BCE (i.e. between 2700 and 2200 BCE). During that same period, Egyptian rulers dedicated the most number of temples and shrines to the worship of Hathor.

About forty miles away from Luxor, one can find the Dendera Temple, an important worship site for Hathor. The Temple of Hathor stands out as the main building within the complex. Located in Upper Egypt, this temple of Hathor sits on the ruins of a structure which was built around the 22nd century BCE. It has thick columns that rose to about 15 meters high. At the top of those columns was the face of Hathor. Sadly, many of those faces and art works in the temple were defaced by the early Christians in Egypt. Regardless, for a building that is more than 4,000 years old, it is very remarkable that some of the artwork remain well kept. 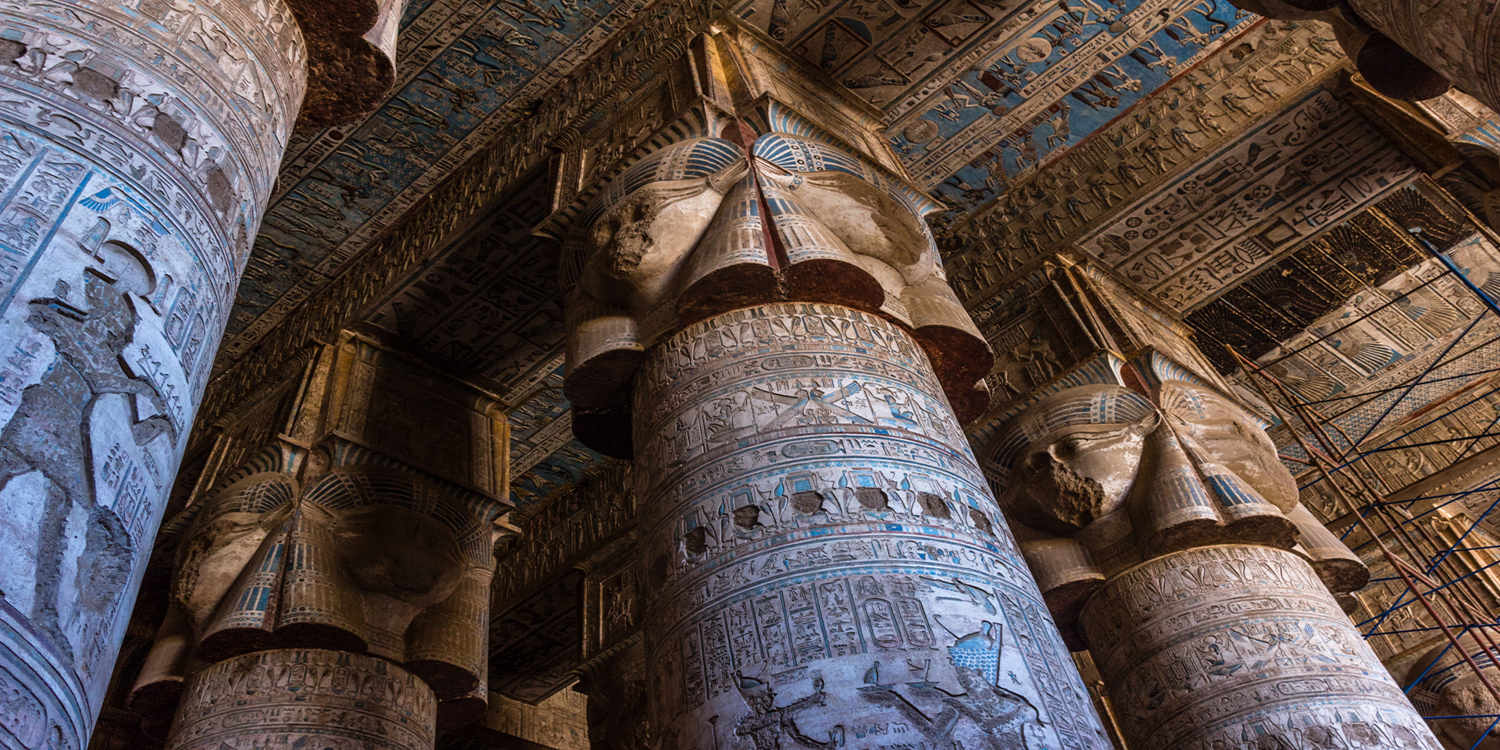 The Temple of Hathor located in the Dendera Temple complex, Dendera, Upper Egypt

Due to the vast nature of the land of Egypt, the goddess Hathor often took several forms. Many of her roles varied from city to city. Hathor can be best described as a feminine type of deity instead of being one specific deity.

When she was considered the sky goddess, Hathor was seen as either the mother or consort (or both) of Horus, the falcon sky deity. In the same fashion, Hathor was frequently associated with the sun god Ra. Titles that the Egyptians often used to describe her were: “Mistress of the sky” and “Mistress of the stars”.

In other myths, she served as the mother of creation. She was the fulcrum that held the Egyptian society together. She was believed to be the sacred cow that nourished the Egyptian pharaohs. As a result of this, Hathor was closely associated with Egyptian royalty.

Another very important point worth mentioning is that Hathor was one of the numerous deities that was seen as the Eye of Ra, i.e. the feminine component of Ra. In that state, Hathor was the deity that kept Ra safe from his enemies.

Due to her being feminine in nature, Hathor’s sphere of influence included motherhood, music, dance, love and sexuality. Those features of hers also made her the consort/mother of several Egyptian gods.

In the land of the dead, Hathor was believed to receive the dead. She offered them water and food, making their journey into the afterlife relatively easier. 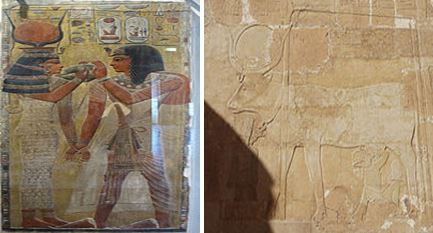 Ancient Egyptian goddess Hathor – goddess of love, sexuality, dance, childbirth, joy, and music – was the divine mother that nourished the Egyptian pharaohs both in this life and the afterlife | Image (L-R): Hathor welcoming Seti I [19th Dynasty pharaoh] into the afterlife; Hathor suckling Hatshepsut [18th Dynasty pharaoh and one of the most powerful women in ancient Egypt]

How powerful was Hathor?

Being one of the earliest deities to have emerged from Atum (Ra), Hathor was considered very powerful in the Egyptian pantheon. Her powers primarily included the ability to fully nurture an individual and the whole population.

She was called upon to cater for the people. Her presence brought laughter, love and joy. In her abode, the Egyptians believed that they could find everlasting peace and prosperity, almost comparable to the afterlife (Heaven).

Hathor and Sekhmet were usually associated with each other. Unlike the peaceful and lovely nature of Hathor, Sekhmet was seen by Egyptians as a goddess of destruction (and in some cases, healing).

When Ra wanted to reprimand mankind for their transgressions, Ra sent Hathor. However, due to her lovely and kind nature, Hathor is believed to have transformed into a fiercer and more ruthless goddess called Sekhmet. For most part of the time, the Egyptians considered Hathor and Sekhmet as one being; that is, a group of deities that belong to the Eye of Ra. They both were daughters (consorts or in some cases mother) of Ra.

Hathor was simply the good and nurturing aspect of creator god while Sekhmet was the bad and destructive component of the divine creator.

To read more about the goddess Sekhmet, visit this link.

Other interesting myths about Hathor 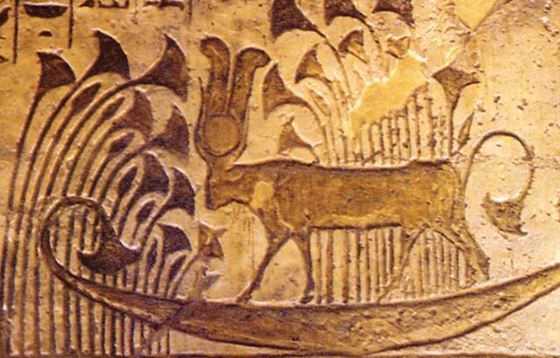 Hathor is believed to have traveled to Greece after a bitter skirmish with the Egyptian gods and goddesses. However, the Greeks drove her away from their lands. Filled with shame, Hathor transformed herself into a beautiful woman, thereby becoming the goddess of love and beauty. This myth explains why the ancient Greeks associated her with the Greek goddess Aphrodite goddess of beauty and love.

Hathor was also associated with foreign lands that possessed valuable and precious minerals. Some examples of those places were in Canaan and Nubia. For this reason, she was seen as the patron goddess of luxuries, mines and trade.

As time went by, Hathor is believed to have merged with the deity Nut, the sky/canopy goddess. The Egyptians believed that Hathor resided within Nut. She also appropriated many symbols of other ancient Egyptian deities.

Along with the goddess Isis, Hathor remained quite relevant up until the first few AD centuries.

In some myths, Hathor was believed to have emerged with Mehet-Weret [the “Cow Goddess” who gives birth to the sun at the beginning of creation] from the primordial waters at the beginning of time. She and her partner then gave birth to the sun god, Ra. They placed him in between Hathor’s cow horns. This explains why her headdress has a sun disk in between two cow horns. And every time the sun god Ra emerged from the underworld, Hathor was the deity responsible for giving birth to him come day light.

It was believed that Hathor’s protection was available to everyone. For example, ancient Egyptian soldiers called upon her for strength and concentration during battles.

Of all the Egyptian goddesses, Hathor had the most number of temples. However, her most preeminent temple was at Dendera in Upper Egypt. The temple, which stands to this day, is considered by many scholars as one of the best-preserved temple complexes in Upper Egypt.

The worship of Hathor, the divine mother of Egyptian kings, became widespread during the reigns of Fourth Dynastic kings. As a matter of fact, Hathor was the patron goddess of Dendera, an Upper Egyptian city located on the west bank of the Nile River.

Up until the New Kingdom (c. 1520 BCE – c. 1075 BCE), Hathor was perhaps the most famous Egyptian goddess; even more famous than the likes of Isis and Mut.

Hathor’s worship was also widespread in foreign lands such as Canaan and Nubia. As a result, ancient Egyptians sometimes linked her to the valuable commodities that were imported from those lands, including precious stones, food stuff and incense.

Egyptians that had difficulties bearing children prayed diligently to Hathor as she was the goddess of sexuality, childbirth and maternal care.

Hathor Myths and Facts | The Dendera Temple Complex, which houses the Temple of Hathor, is considered by many scholars as one of the best-preserved temple complexes in Upper Egypt