Everything that you need to know about Apep, the Ancient Egyptian Deity of Chaos 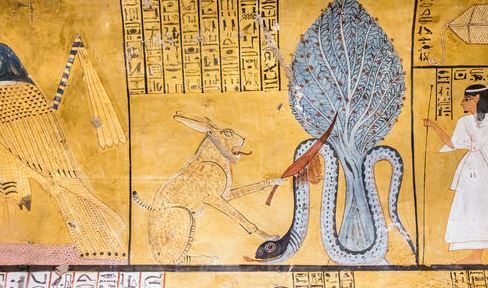 Apep was an ancient Egyptian deity of unbridled anarchy and sheer evil. A staunch opponent of Ma’at (order), Apep often appeared in the form of a gargantuan snake (or a deceptive serpent). Although, he resided primarily in the underworld, ancient Egyptians believed that the Lord of Chaos’ tentacles were far reaching, all the way to the land of the living. Throughout the ages, Apep was most known for his nightly battles with his arch rival, Ra the sun god. 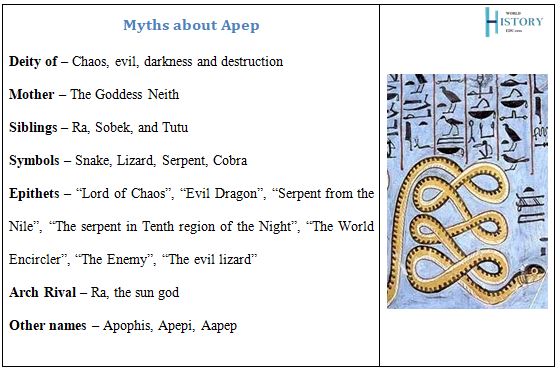 Mythology and Meaning of Apep

Many ancient scholars and books state that Apep came to prominence around the end of the Old Kingdom, i.e. the First Intermediate period. The period was full of uncertainty and political strife. That was how come Apep came to be associated with chaos (izft) and evil.

On the other hand, some archaeologists have remarked that Apep’s story goes way back to pre-dynastic periods. For example, discoveries have been made of some pre-dynastic artworks that contain paintings of serpents and other forms of snakes. Those artworks most likely refer to Apep or some sort of evil force.

What is conclusive is that the serpent or snake was the commonest symbol of evil and destruction in ancient Egypt. For example, the Pyramid Texts contain a plethora of snake deities that the Egyptians believed were agents of evil and chaos. Many of those serpents were believed to dwell eternally in the dark areas of the Duat (hell).

Like many ancient Egyptian deities, Apep’s origin story varies from one ancient text to another. According to one Egyptian myth, Apep emerged from Ra’s umbilical cord at the time of the latter’s birth.

The Romans on the other hand referred to Apep as “he who was spat out”. This epithet runs parallel with his origin story found in a different text, which states that Apep was born out of the saliva of the goddess Neith’s saliva. Neith was venerated as the creator goddess of everything in the universe. Additionally, she was primarily in charge of wisdom, motherhood, water, childbirth, war, etc. In this account, Apep is seen as the sibling of Sobek, Ra, and Tutu.

Because the ancient Egyptians associated Apep with all that was evil and frightful, they believed that Apep was the cause of sine natural occurring events such as solar eclipse, floods, and earthquakes.

Also, he was usually depicted as a serpent or a yellow snake. In some cases, he was seen as a lizard (i.e. The Evil Lizard) or a crocodile.

Apep could be seen in a similar fashion as the god Set. Unlike Set however,  Apep was a different kind of evil deity, an unreasonable type of bad natural force. Commonly called the “Uncreator”, Egyptians depicted him with very large coils, which many believed could squeeze out the life from his opponents.

To symbolize the overpowering nature of Apep, some ancient Egyptian artworks depicted him dismembered. Paintings of Ra, in the shape of a huge cat, piercing Apep were quite common. 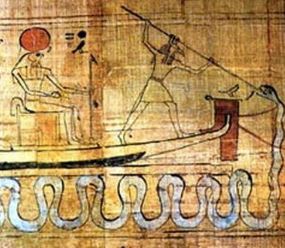 Due to the lack of any motive in his evil ways, Apep was not worshiped by in ancient Egypt. Instead, he was feared and hated across the land.

Realizing that Apep could not be permanently defeated, Egyptians prayed and performed a number of daily rituals that they believed helped the sun-god Ra emerge victoriously over Apep.

The commonest ritual that the Egyptians used to ward off Apep was called “Banishing Apep”. During the ritual, which was often overseen by the priest of Ra, an effigy of Apep was made. Subsequently, the priest called on all forms of evil in Egypt to possess of the effigy. After reciting some incantations, the priest dismembered (mutilated)and burnt the effigy.

According to one myth, Apep’s roar was so powerful that it could make the underworld tremble. He also had magical power in his eyes that he used to hypnotize Ra the sun god. It is for this reason why Ra always rode along with other gods in the underworld. Those gods (particularly Set) and goddesses would rush to rescue Ra the moment Ra got hypnotized by Apep.

It was also believed that earthquakes and thunderstorms were the result of Apep’s movement in the underworld. 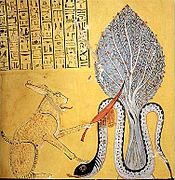 Apep had long and powerful coils (shaped like the sandbanks) that he used to immobilize Ra’s sun boat in the underworld. Shortly after this, Apep would swallow Ra. This happened around the time the sun set. However, Ra always put up a strong fight. With the help of friendly gods and goddesses, Ra fought his way out of the Apep’s belly, emerging victorious and bright as the morning sun.

Stories similar to the above were very common during the New Kingdom. Some texts even state that Apep was found below the horizon, i.e. a reference to the underworld. He stalked sun-god Ra at Bakhu, a mountain to the west, the place where the sun set.

Ancient Egypt also believed that Apep’s greatest rival was Ra, who was not only a sun deity but also a defender of Ma’at (order).

In the eyes of some ancient scholars, Apep and Ra were two sides of the same coin, i.e. yin and yang, darkness and light and, night and day. And although Ra almost always vanquished Apep, the Egyptians believed that somehow Apep always found a way to regenerate the following night. This is why he was referred to as the “Serpent in Tenth region of the Night”.