Supreme Court of the United States: History and Major Facts

Supreme Court of the United States

Here is a quick look into the history and major facts of the nation’s highest court – the U.S. Supreme Court:

In 1789, Congress passed the Judiciary Act of 1789 which allowed for the establishment of the first Supreme Court which was intended to act as the nation’s topmost tribunal. The act was signed into law by the nation’s first president George Washington. The Court was composed of six justices who were to have no term limit – thus making it a life-long appointment.

Two days after the passage of the act, the U.S. Senate confirmed all six men to serve on the Supreme Court of the United States. 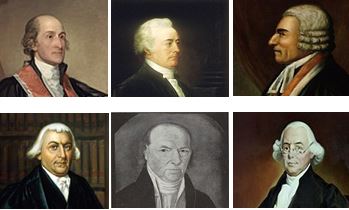 What Article of the U.S. Constitution established the U.S. Supreme Court?

The nation’s highest court came derives its power from Article 3 of the Constitution. As an important arm of government, the Court has complete jurisdiction over the laws in the United States. It mainly concerns itself with issues that border on whether they are constitutional or not.

When was the first Supreme Court session held?

At the Royal Exchange Building in New York City, the first judges of the Supreme Court had their first session on February 1, 1790.

Prior to that, never had there been a judicial body, anywhere in the world, as powerful, or as influential as the U.S. Supreme Court. The Court was intended to occupy a neutral spot in politics in America.

The Court is the last point of call whenever we as a nation are faced with a constitutional crisis. It has received arguments from several renowned men and women on some of the most important issues concerning our nation – i.e. from religion to abortion rights to powers of the executive.

Who determines the size of the Supreme Court of the United States?

According to the U.S. Constitution, the only body that has the power to set the size of the U.S. Supreme Court is Congress.  Over the existence of the nation, the number of justices on the Supreme Court has varied. Congress altered the size in order to serve its own agenda. The number has dropped as low as five (the lowest number required by law). During the Lincoln administration, there were 10 justices on the bench.  Since 1869, the size has consistently stayed at nine.

Major Facts about the Supreme Court of the United States

The U.S. Constitution is silent about the number of judges the Supreme Court can have

Considering there was an even number of justices, what happened when there was a split decision? It turns out that a situation of split decision never cropped up because all the judges regarded themselves as Federalists.

Also, split decision was a rare occurrence because the bench did not always have a full house – owing to say illness.

Adams and his Federalist-dominated Congress then passed the Judiciary Act of 1801 just before Jefferson was sworn. The act reduced the number of Supreme Court justices from six to five. The Federalists’ aim was to reduce the chances of Jefferson get an opportunity to fill a Supreme Court seat during his presidency.

Upon entering the White House, Jefferson began the process of repealing the act (the Judiciary Act of 1801) so as to return to the six justices.

In a bid to prevent a recurrence of the Supreme Court’s ruling in the Dred Scott v.  Sanford (1857) case, the Abraham Lincoln administration increased the Court’s justices from nine to ten in 1863. Lincoln hoped that the additional justice will prevent the Court from arriving at another pro-slavery ruling in a post-civil war America.

During Andrew Johnson’s presidency, the number of justices was reduced by Congress – from nine to seven. As usual, Congress was trying to prevent Johnson from having the opportunity to fill a vacant seat on the bench.

Another time when Congress passed Judiciary act for a political agenda was just prior to Ulysses S. Grant taking the presidential office. Congress increased the number of justices from seven to nine. This move was to reward Grant with an opportunity to fill the two new seats on the bench. With those changes, Congress and Grant were able to reverse the Court’s earlier decision which stated that paper money was an infringement on the Constitution.

Faced with a Supreme Court that tried to limit his New Deal legislation, Franklin D. Roosevelt (FDR) sought a never-seen-before action – he wanted to increase the Supreme Court justices to a whopping fifteen. He reasoned that those six additions would reverse some of the Court’s earlier decisions concerning the New Deal.  Congress did not buy into FDR’s proposed changes as it voted against it 70-20. The president’s plan to change the number of justices came to be referred to as “packing the court”.

The other times when Congress exercised its constitution-given power were: in 1807 (seven justices) and in 1837 (nine justices).

Location of the first session of the U.S. Supreme Court

After its first session in New York City (in February 1790), the Court moved to Philadelphia. However, when the nation’s capital – Washington – was completed, the Court started holding its session in Washington beginning around February 1801. Washington became the home of the Court; although, it moved from one building to another for the next century and a half.

Did you know: The Court was forced to have a session at a private residence following the destruction of the Capitol by Great Britain in 1814 (during the War of 1812)?

President William Taft was the one who urged Congress to allocate almost $10 million to the construction of dedicated building for the Court. Taft made that request when he was the Chief Justice of the Supreme Court. Official usage of the building, which was designed by Cass Gilbert Sr. – began around 1935.

Did you know: The Supreme Court has got its own police force? Also, the Court’s basketball court is called “the highest court in the land”.

What are the requirements for one to become a justice of the Supreme Court?

There is no clear mention of the Chief Justice position other than the part of the Constitution which states that a Chief Justice must preside over impeachment proceedings in the Senate.

The U.S. Constitution does not spell out the academic qualifications required to become a Supreme Court justice. If one wanted to enter the White House or the Senate, there are requirements pertaining to age, residency and citizenship are spelt out in the Constitution. However, in terms of the requirements to get appointed to the Supreme Court, the Constitution was silent. Foreign-born Americans have served on the bench. From 1939 to 1962, Felix Frankfurter – an Austrian native – served on our nation’s highest court.

The Court has had a justice as young as 32 years old – Joseph Story. Justice Oliver Wendell served in the Court way into the ripe age of 90. And although there are no specified academic or professional qualifications stated in the Constitution for a Supreme Court seat, virtually all the justices that have served were lawyers. In the 18th and 19th century, it was completely normal for a justice to be appointed even though he never went to law school. Back then, people rarely went to law school; instead, they went under the wings of a qualified lawyer in order to become lawyers themselves. For example, Justice James Byrnes, who served from 1941 to 1942, did not have his high school diploma, neither did he study at any law school.

Among the various schools in the U.S., Harvard is the biggest contributor of justices to the Supreme Court.

To date, William O. Douglas holds the record the longest-served justice of the Supreme Court. Justice Douglas served for 36 years and 7 months – from April 1939 to November 1975.

READ MORE: 12 Most Influential Presidents of the United States

The U.S. Constitution allows for justices of the Supreme Court to be impeached, just like any other federal worker. The fact that their appointment is for life doesn’t shield them from an impeachment. To this day, the only impeached justice is Samuel Chase. In 1804, the embattled justice was impeached by the House of Representatives because he was seen as very partisan in his decision making. Luckily for Justice Chase, the Senate acquitted him the following year. Chase, who began serving on the bench in 1796, went on to serve in the Court until he died in 1811.

U.S. President with the most number of Supreme Court appointments

George Washington holds the record of being the president with the highest number of Supreme Court appointments. Our nation’s Founding Father began with the first six justices of the Court in 1789 before following it up with five more appointments as a result of illness, death and retirement.

Coming in second place is FDR, who appointed nine justices to the Supreme Court. William Howard Taft comes in third on the list. Taft – 27th US President and 10th Chief Justice – made six Supreme Court appointments.

Four presidents in the nation’s history were unable to make any appointments owing to a host of factors. Andrew Johnson could not do so because of his rift with Congress; President William Henry Harrison passed away just a month after taking office; likewise President Zachary Taylor died 16 months into his term of office; and in President Jimmy Carter’s case, well, it just could not happen.

Such was President John Tyler’s unpopularity in Congress that he could only get one out of his nine nominations confirmed by Congress.