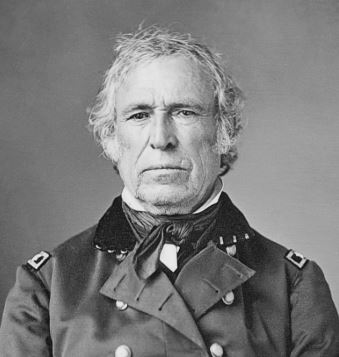 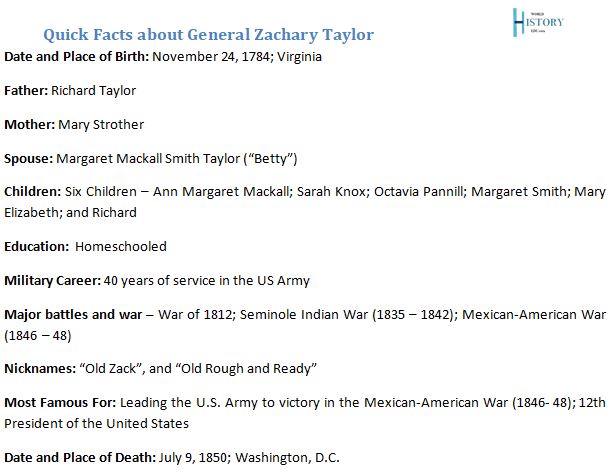 Facts about the 12th President of the United States, Zachary Taylor

Who was Zachary Taylor?

As a general in the US army, Taylor featured prominently during the Mexican American War (1846-1848). He helped secure victory for the US in the war—a victory that paved the way for the expansion of America’s boundaries.

Due to the extreme internal difficulties and conflicts that the U.S. faced at the time, General Zachary Taylor’s brief tenure (16 months) in the White House wasn’t the most memorable of presidential tenures.

Here is a quick look at the biography and achievements of Zachary Taylor – 12th President of the United States.

On November 24, 1784, Zachary Taylor was born in Virginia. This future president of the United States was born at a plantation near Gordonsville, Virginia. His parents were Richard Taylor and Mary Strother. At a tender age, Taylor’s family, including eight other siblings, moved from Virginia to Kentucky. The family acquired a large piece of land and started farming on it.

Zachary Taylor was not the brightest of school children. Instead, he always harbored dreams of joining the U.S. army. Therefore, when the opportunity presented itself in 1806, he quickly enlisted in the U.S. army, making first lieutenant two years later.

Time in the United States Army

Joining the army at the age of 22, Taylor would go on to spend close to 40 years serving his in his country’s army. By 1846, the Virginian-born soldier had made it to the enviable rank of major general.

Some of his most memorable feats of achievement in the U.S. army include, serving in the War of 1812. Taylor also featured during the Black Hawk War of 1832 – a four-month war between the United States and Native Americans, including Sauk, Fox, and Kickapoo tribes. From 1835 to 1842, Taylor partook in the Second Seminole Wars. He received stellar praises and commendations for his brave leadership during the war, most notably the Battle of Lake Okeechobee in 1837.

A two-year war broke out between the United States and Mexico over the former’s annexation of Texas in 1845. General Zachary Taylor, along with 4,000 men of his, was tasked by President James K. Polk to move to Rio Grande – a disputed border region close to Mexico’s Matamoros.

Just as President Polk was anticipating, a group of Mexican soldiers attacked his men on April 25, 1846. The Mexicans hoped to force Zachary Taylor and his men out of Rio Grande because they considered that area a part of the Mexico. With this attack, the Mexican-American War was born.

In the month of May, 1846, the Mexicans marshaled another attack against General Taylor’s forces. That time around the U.S. were well prepared and repelled the Mexican attack. The general was crucially important in securing wins during the battles of Palo Alto and Resaca de la Palma.

After U.S. Congress declared war on Mexico, General Zachary Taylor was instructed to march into Mexico. The U.S. army crossed the Rio Grande, taking Mexican cities such as Monterrey. However, Taylor, for some reason, halted his advance; he unilaterally gave the Mexicans a two-month armistice.

The armistice infuriated President Polk, marking the beginning of the rift between Taylor and Polk. To make matters worse, a letter written by Zachary Taylor surfaced in the newspapers. The contents of the letter included critical statements against the manner in which President James K. Polk and the secretary of war, William L. Marcy handled the Mexican-American war. Owing to this fall out, Polk ordered the removal of several key soldiers from the Taylor’s command. Those men were to be transferred to General Winfield Scott’s command.

However, Taylor blatantly disobeyed the president’s directives; instead, he gathered his vastly outnumbered troops and headed straight into the Battle of Buena Vista. This was one of the most defining moments in Taylor’s life. The general was able to secure victory over the Mexicans even though his army size was just one-third of that of the Mexicans. The Battle of Buena Vista, commonly called the Battle of Angostura, turned out to be a crucial element in the war that America eventually won.

General Zachary Taylor’s bravery throughout the war made him an instant hero in the country. Just like previous U.S. army generals and men (i.e. George Washington and Andrew Jackson) that leveraged their military exploits into building a fine political career, he did exactly that.

Taylor, the hero from the Mexican-American War, contested and won the Whig Party’s presidential candidate slot for the 1848 U.S. presidential election.

The general would go on to defeat Lewis Cass – the Democratic presidential candidate – during the general election. Taylor obtained 163 Electoral College votes; this was in contrast to the 127 that Lewis Cass obtained.

Sworn into office on March 4, 1849, Zachary Taylor became the 12th President of the United States. His vice president was Millard Fillmore.

U.S.’s annexation of Texas and other territories brought up the issue of slavery. Kind courtesy of the Missouri Compromise of 1820, the politicians were able to put a lid over the contentious issue of slavery; however, the introduction of new territories resulted in the issue making it to the foreground. Everyone wondered what statuses the new states admitted into the Union would hold. Would they be slave-holding states or Free states?

President Taylor argued strongly in favor of admitting those new states as a Free states. For example, he chose to support the creation of California as a free state that outlawed slavery.

However, Southern Congressmen opposed such moves by the president. Their biggest fear was that should California be admitted as a free state, the agenda in the U.S. Senate can be hijacked by the Northern politicians, who supported the abolishing of slavery.

When the Southern politicians threatened to secede from the Union over the issue of slavery, Taylor threatened them that he would do whatever it took to keep the Union, even it meant using the army.

taken in rebellion against the Union, he would hang … with less reluctance than he had hanged deserters and spies in Mexico.

Amidst all the conflict between those in favor of the perpetuation of slavery and those in favor of abolishing slavery, Zachary Taylor had one objective – compel the Southerners to accept the free state desires of California and New Mexico.

There was a huge concern that the president would act out his threat of using force to keep the south in the Union. A few politicians from both the South and the North pushed for a compromise between the two sides.

How did President Zachary Taylor die?

On July 4, 1850, President Zachary Taylor took ill after eating a snack of ice cream at the Independence Day celebration. He was diagnosed with a stomach upset, perhaps cholera. Five days later, the illness got worse, and the president took his last breath. Taylor died on July 9, 1850 in Washington D.C. Experts at the time believed that the cause of Zachary Taylor’s death was a gastrointestinal condition, also known as “cholera morbus”. He was 65 at the time of his death.

As the demanded by executive precedence, Vice President Millard Fillmore was immediately sworn in as Zachary Taylor’s replacement.

He is remembered for not kowtowing to some demands of his Whig Party; instead, he managed his cabinet in a similar manner as he did during his time in the army. For example, when the thorny issue of slavery began to tear the nation apart, President Zachary Taylor was ready to use the might of the United States Army to keep the Union intact. He was less open to the idea of compromise. As a matter of fact, it was after his death that the North and South were able to strike the Compromise of 1850. Zachary had very strong nationalistic ideas. Obviously, this was fueled by his time in the military.

Other Interesting Facts about Zachary Taylor

General Taylor during the Mexican-American War (1846-48)