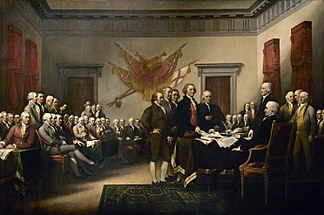 Complete History of the Declaration of Independence

The Declaration of Independence by the 13 small, but very much determined, North American colonies will always be regarded as a monumental feet of achievement. The path that these colonies tread was filled with brutal wars and violent clashes with the British Empire, which was arguably the greatest empire at that time.

Officially, their journey for independence is said to have begun in April 1775. After about a year of intense fighting, delegates from the 13 colonies (the Continental Congress) met in Philadelphia in July, 1776, to pass a resolution that freed their colonies from Britain’s rule. That solemn resolution of July 4th is what is referred to as the Declaration of Independence.

In this detailed article below, World History Edu explores exactly what the Declaration of Independence meant back then.  Also in the article is a chronological explanation of the historical events that took place before and after July 4, 1776.

Conflict breaks between the Colonies and British Soldiers

1775 is pegged as the exact year when sentiments and tensions boiled to a point where the American colonies began to fiercely rebel against Great Britain’s rule. The goal of these rebellion was to gain greater freedom for the colonies.

However, this movement did not start as a full-fledged independence movement. It started with a few skirmishes and minor bickering with the British Empire.  Prior to these  minor protests, the colonies had no qualms taking orders from the British crown.

What changed? And how did that metamorphose into a struggle for total independence? In order to properly understand this change, we must go back to the genesis of the conflict.

Continental America Shortly Before the Declaration of Independence

For close to two centuries (from the 1500s to the 1700s), the British Empire had gradually expanded its reach to virtually all parts of north-eastern America. The first British and European settlers arrived around 1585 and formed the Roanoke Colony. This colony failed and soon there was the Jamestown colony (located in Virginia) in 1607. This colony lasted and became the hub of future British settlers. Soon, the British started expanding across the east coast of North America. By the turn of the 18th century, there were colonies spawning all over the east coast. Their population and land area expanded rapidly. Trade and shipping flourished.

Across the Atlantic, the British crown had better ideas. The monarch, along with Parliament, realized that they would generate vast amounts of revenue by taxing these thriving colonies. By mid-1700s, George III systematically strengthened his grips on these colonies. Armed with several reform acts passed by the British Parliament, massive taxes were levied on the colonies. In the King’s defense, he felt that the colonies should foot the bill of the just ended French and Indian War. This war that lasted from 1754 to 1763 resulted in significant territorial gains for the British Empire. However, it came at a huge financial cost to the British Empire. Hence, taxing the colonies to pay for the cost of the war seemed very reasonable to the Empire.