The History of Native Americans: The Indigenous People of the Americas

When we talk of Native Americans we are simply referring to the early settlers on the Americas (the North and South American continents) prior to the arrival of the Europeans. The Native Americans have a history that is quite tragic as well as intriguing. On this page, we shall delve into the past of the indigenous people of America: a history that spans over tens of thousands of years ago.

The meaning of indigenous Person(s)

Indigenous persons or people can be referred to as a group of first (original) settlers on a land. Going by the definition, Native Americans who are also known as “Indians”, “American Indians”, or “Aboriginal Canadians” (in Canada) can be classified as indigenous people of the Americas.

How the Settlement of the Americas Occurred

The first human settlement on the Americas took place during the ice age, thus, over 20,000 years ago. It began when a group of migrants traveled from Asia (particularly from Siberia) to Alaska via a land bridge called Beringia. This land connected Asia to the Americas (the continent of North and South America) and it is now referred to as the Bering Strait. 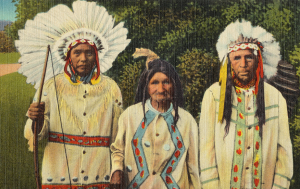 The migration from Asia (Siberia) to the Americas (precisely, Alaska) was enhanced by the extremely low sea levels at that time. Low sea levels during the first migration period meant that people and animals were able to easily cross the Bering Strait, which was then covered with thick sheets of ice.

Did you know that the Americas were the last continents in the world to experience human settlement?

The initial settlers migrated across all the regions of the Americas, forming various and diverse tribes scattered across the continent. It is believed that there were at least 500 different tribal groups in the Americas, with well-known tribes such as: Apache, Cherokee, Tainos (Hispaniola), and the Navajo tribes. Each tribe modified their lifestyle to suit the geographical region in which they inhabited.

Why Native Americans are also known as “Indians”?

The indigenous American people were labeled Indians by Christopher Columbus. Columbus was the leader of the group of Europeans who first arrived in the Americas in 1492. So how did the name (nickname) “Indians” come about? Well, the Europeans upon their first arrival on the Americas initially believed that they had arrived on an Indian nation; hence they named the then indigenes “Indians”. This name will accompany this set of people for many, many years, including modern times.

Read More: The Life and Accomplishments of Hrnán Cortés, the Conqueror of Mexico

European Colonization of the Americas

The arrival of the first Europeans delegation on the Americas, led by Christopher Columbus. Image Credit: wordpress.clarku.edu

The arrival of the Europeans on the continent of the Americas led to a drastic change in their culture and livelihood. This led to a rather tragic side of the history of the Native American people.  The indigenes experienced a drastic reduction in their numbers (population) and territory as a result of several unpalatable happenings. Some of which included:

It is believed that the majority of the decline in the indigenous population of the Americas was a result of the outbreak of diseases. The natives at that time lacked the immunity over some the alien diseases which the Europeans brought along with them to the Americas.

Read More: Story and Death Count of the Trail of Tears

In the 21st century, you will find descendants of Native American scattered throughout many nations of the North and South American continents. Even though at this moment they don’t form the majority of the population density in those nations; however, they have quite a noteworthy presence. You can find Native American settlements in countries such as: USA, Canada, Mexico, Peru, Greenland, Argentina, Venezuela, Grenada, Ecuador, Colombia, Chile, Guyana, Paraguay, Bolivia, Brazil, Suriname, Saint Vincent and the Grenadines, and Puerto Rico.

Indigenous People in the USA

In the USA, you will find a minority of the descendants of Native Americans living on reservations. These regions have been particularly set aside for Native Americans. This is in order to protect the culture and heritage of the indigenous people of America.

However, most of Native American descendants today prefer to live in cities in the USA. You can find many descendants of the indigenous people living in areas such as: New York City, Chicago, Denver, Oklahoma City, Seattle, and Houston.

In Canada, the Indigenous people are also referred to as Aboriginal Canadians. They are made up of the Inuit, First Nations, and the Metis. They (indigenous people) were often described using the terms “Indian” or “Eskimo”. However, those terms are no longer used (outside legal terms, because they are still used legally) in describing the indigenous people in Canada. The expression “Native American” is not famously used in Canada as it is used in the US.

Mexico is one of the countries in the Americas where you can find a significant number of indigenous settlements. Geographically, the majority of the indigenous people of Mexico are located in Chiapas states, Oaxaca States and in Yucatan Peninsula. A minority of the indigenous people occupy the Northern regions of Mexico. Tribes like; Mixtecs, Aztecs (Nahua), Mazahua, Purepechas, and Otomi can be found in the Central regions of Mexico.

Peru also has a significant of its population being Native American descendants. The massive presence of the indigenous Peruvians has influenced their cultures and lifestyle significantly. In present Peru, some indigenous Peruvians especially, those located in the nation’s Amazonian regions continue to experience cultural discrimination and other forms of violence’s.