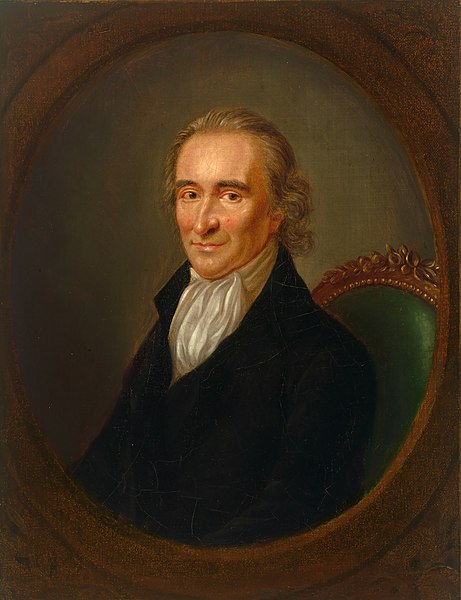 Thomas Paine authored Common Sense (1776) and The American Crisis (1776–1783), the two most famous pamphlets during the American Revolution. The 47-page Common Sense pamphlet was a staple among Revolutionary soldiers fighting for independence from Great Britain.

In the article below World History Edu goes through the biography, major works and accomplishments of Thomas Paine, the England-born philosopher popularly known as The Father of the American Revolution.

Most known for: Using his works to inspire soldiers and leaders of the American Revolution

In Thetford, Norfolk, England, Thomas Paine was born on January 29, 1736 to Joseph Pain, a corset maker, and Frances Paine. His mother was an Anglican, while his father was a Quaker.

Paine had his early education at Thetford Grammar School; however, he dropped out of school when he was 12. He proceeded to take up apprenticeship at his father’s corset making shop.

When he was 16, he tried to convince his dad to give him the permission to work as a privateer on a ship called The Terrible, captained by a man called Captain Death.

For a short period of time he served as a privateer on a ship called King of Prussia. After failing miserably on the job, he went to work as an excise officer in Lincolnshire and then later at Lewes in Sussex. On that job too Paine failed to distinguish himself appropriately as he was discharged on two occasions. In between those two abysmal stints at the Board of Excise, he worked as a school teacher in London, England.

It was also around this time that he developed a strong passion for civic issues. One of his first early works The Case of the Officers of Excise was released  in 1772. In that 12-page article Paine made very strong points to support his argument for pay raise for the officers employed by the Board of Excise. He distributed several thousands of the book to members of Parliament and other government officials.

Why did Thomas Paine come to America?

Thomas Paine’s met with Benjamin Franklin in London in 1774. He was introduced to the Founding Father by George Lewis Scott, a mathematician and Fellow of the Royal Society.

In the same year (1774) of his second dismissal from the Board of Exercise, he had the honor of meeting Benjamin Franklin, who convinced him to move to America. Paine must have felt that Franklin’s ideas of self-governance and freedom resonated very with him.

America was on the verge of entering into an all-out civil war that pitted opponents of British rule against Crown loyalists backed by the British government. The young Paine was beaming with so much energy and looked forward to delving into the civic issues of the American colonies.

Time in America and the Common Sense pamphlet 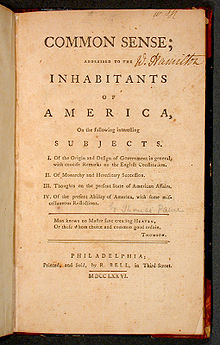 Employed as the editor of the Pennsylvania Magazine, Thomas Paine relied heavily on contents and stories from around the colonies. With his pamphlet Common Sense (1776) and series like American Crisis (1776-1783), he helped increase the magazine’s readership, making it number one in the colonies at the time.

“Common Sense” is credited as playing a crucial role in convincing colonists to take up arms against England. In it, Paine argues that representational government is superior to a monarchy or other forms of government based on aristocracy and heredity.

His publications at the magazine encouraged the politically inactive sections of the society to join in the struggle for America’s independence. Under the pseudonyms “Atlanticus” and “Amicus”, Pain criticized the Quakers for the pacifist stance. Additionally, he used the magazine to advocate social improvement schemes like the present-day Social Security.

John Adams on Thomas Paine, the England-born philosopher and political theorist popularly acclaimed as The Father of the American Revolution.

In the mid-1770s, Thomas Paine was part of a growing section of people who reasoned that reconciliation with Great Britain was an affront to God. By infusing some sense of providence into his arguments, he was able to steer public anger and frustration against British rule and the Crown (i.e. King George III).

It must be noted Paine’s ideas were already known at the time, especially to the elite. The distinguishing thing was that he packaged those ideas in a clear and concise manner, making it resonate perfectly with the general public. He’s been praised for his ability to blend popular and elite notions at time. The above factors are just some of the reasons why Thomas Paine’e major works like Common Sense and Rights of Man were so successful.

Beginning around mid-spring of 1777, Paine served for a couple of years as secretary to the Congressional Committee for Foreign Affairs. In 1779, he became the clerk for the Pennsylvania Assembly.

Thomas Paine’s resignation from the Congressional Committee for Foreign Affairs

In one of his papers published in 1777, he may have revealed a bit too much about the Revolutionaries’ negotiations with France. For that he was removed from the Congressional Committee for Foreign Affairs in 1779.

Some historians say that the reason for his removal had to do with his criticisms of Silas Deane – an American diplomat who was tasked to have secret negotiations with France concerning political and financial support for the Revolution. Paine called Deane out because he felt Deane was profiteering from the war. He called on Congress to carry out investigations into the links between Deane and Robert Morris, a key fancier of the American Revolution.

After being accused of being unpatriotic by a number of leading figures, including John Jay – president of the Continental Congress – who came to the defense of Deane, Paine was eventually vindicated as Deane’s corruption came to light. Apologies followed shortly from Robert Morris to Thomas Paine.

Although he pleaded with the Revolutionaries to spare the lives of many French Royals and Royalists, including King Louis XVI, Thomas Paine still supported the French Revolution.

Paine’s Rights of Man had a tremendous influence on the French Revolutionaries. And although he could not even speak French, he was elected to the French National Convention, representing the district of Pas-de-Calais. His reputation in France increased as he was part of the nine-member Constitutional Committee of the Convention tasked to draft a new constitution for the French Republic.

Read More:  9 Most Significant Causes of the French Revolution

He was not in favor of executing Louis XVI. Rather he suggested that the deposed ruler be exiled to the US because of the support the king and other French royalist gave to the U.S. during the American Revolution. Secondly, Paine was not a fan of capital punishment, hence that suggestion.

Paine’s book Rights of Man came out in two parts in 1791 and 1792. In the book, Paine submits a critical rebuttal of the of one of the works of Irish political philosopher Edmund Burke which attacked the French Revolution. Although he pleaded with the Revolutionaries to spare the lives of many French Royals and Royalists, including King Louis XVI, Thomas Paine still supported the French Revolution.

As a result of his alliance with the Girondins, Paine came to be hated by the Montagnards, particularly Maximilien de Robespierre. After the 1793 decree that forced the removal of foreigners from the Convention, Paine was arrested and imprisoned in December 1793. He was slapped with the death penalty for treason simply because he criticized the rampant executions at the guillotine, including the execution of Louis XVI.

It was during his arrest in France that he started writing “The Age of Reason”.

Then-President of the Convention, Marc-Gullaume Alexis Vadier, turned down requests to release Paine because he considered Paine a citizen of the country (i.e. England) that France was at war with.

American ambassador to France, Gouverneur Morris, did not pursue the case that much perhaps due to a slight bad blood between the two men. Had it not been for an error by the gaoler (jailer) Paine would most likely have been executed.

In November 1794, he was released following hard-fought efforts by James Monroe, then Minister to France. About six months later, in July 1795, Paine and many Girondins were re-admitted into the Convention.

Following his release from prison in France, he took to taking a shot at many American leaders, including the likes of George Washington. He held the view that the U.S. abandoned revolutionary France and did not do all it could to save the lives of many Royalists that supported and financed American Revolution.

As for George Washington, Paine accused him of not doing enough to secure his release from French prison. The philosopher accused the first president of the U.S. of conspiring with Robespierre to have him arrested.

Like Alexander Hamilton, George Washington, and Benjamin Franklin and among others, Thomas Paine received an honorary French citizenship.

In a very critical letter to George Washington in 1796, Paine described the former general as an incompetent leader and an ungrateful person. When Washington refused to respond to the letter, Paine went ahead and made the letter public. He instructed his publisher Benjamin Bache – a Jeffersonian democrat – to publish the letter.

But Washington was still very much beloved by Americans, and the letter he sent to President Washington diminished his standing and popularity in America. The members of the Federalists used Paine’s letter to accuse him of being a puppet for radical French revolutionaries.

Thomas Paine also criticized the Jay Treaty of 1792, calling the 10-year peace and trade pact with Great Britain as an affront to the values that inspired the American Revolution in the first place. He argued that America was related to Europe as a whole, not just England, and that it needed to freely trade with nations like France and Spain.

How and when did Thomas Paine die? 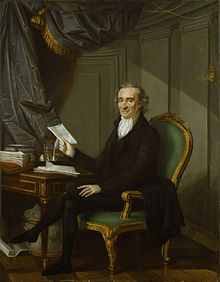 At his home in Greenwich Village, New York City, Thomas Paine, 72, passed away on June 8, 1809. In his final few years, he was attended to by Marguerite Brazier, the wife of Nicolas de Bonneville.

In his will, he bequeathed a bulk of his estate to his longtime friend Marguerite Brazier. As per his wishes, he was buried at New Rochelle,  at his farm, under a walnut tree.

Thomas Paine, in a letter addressed to the Abbe Raynal on the Affairs of North America

Some examples of Thomas Paine’s most famous works are:

Thomas Paine’s two-volume treatise and views on religion, particularly institutionalized religion, The Age of Reason, was published in 1794 and 1795. The third part appeared in 1802 amid his poor health.

In the Age of Reason, Thomas Paine stated that he “believed in one God and no more”; however, he could just not condone the sheer amount of violence in the Bible. Paine described himself as a deist, calling Deism the only true religion.

In the first volume of The Age of Reason, Paine throws a number of criticisms at the doctrines in Christianity as well organized religion in general. He argues in favor of rational reasoning and scientific pursuits.

Thomas Paine, The Age of Reason

In the second volume of the said book, the author delves into both the Old and New Testaments of the Bible, as he punches holes into the divinity of Christ. Many might think of Thomas Paine as an atheist, however, the truth of the matter is the philosopher was actually a deist and believed in God. This is clearly shown in his book, The Age of Reason.

Many might think of Thomas Paine as an atheist, however, the truth of the matter is the philosopher was actually a deist and believed in God. This is clearly shown in his book, The Age of Reason.