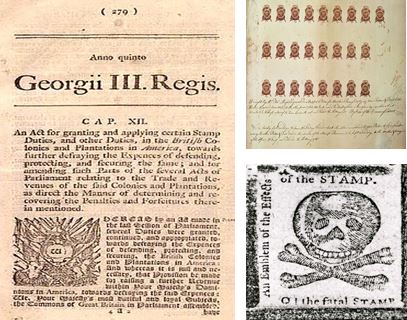 Definition and Significance of the Stamp Act 1765

Get to know more about the Stamp Act of 1765, a deeply unpopular tax imposed by the British Parliament on the American colonies (the Thirteen British Colonies). It is generally considered as one of the biggest events that caused the American Revolution.

What was the Stamp Act of 1765? – Definition and Summary

On March 22, 1765, the British Parliament passed the Stamp Act, imposing taxes on virtually all printed materials in the American colonies. Examples of those materials included newspapers, almanacs, magazines, playing cards, wills, and a host of other legal documents.

The Act derives its name from the fact that the colonies were forced to buy authorized stamps made by Britain whenever they purchased any of those printed materials. The stamps were to serve as proof that the holder had complied with the tax.

On the stamps, there was a Latin phrase that read, ‘honi soit qui mal y pense’. The phrase translated into ‘Evil unto him who thinks evil of it.’

Britain did expect resistance here and there; however, what King George III and the British Parliament failed to foresee was the sheer scale and depth of irate resistance to come from the American colonists. The colonies did not want any form of internal taxes (i.e. direct) imposed on them without their consent. They reasoned that acceptance of the taxes could open the door wide open for even more intolerable taxes.

Major Reasons why the Stamp Act of 1765 was passed

The British government dared not impose further taxes on English citizens that were already neck deep in taxes. Doing so would certainly have resulted in a revolt in England. Raising money from the American colonies seemed like the most sensible thing to do at the time. Hence the British Parliament passed the Stamp Act.

Another important reason Britain gave was that the taxes on those printed materials were vital in maintaining British troops stationed in the various American colonies. At the Appalachian Mountains (i.e. the American frontier) alone, Britain had stationed about 10,000 troops to keep the colonists safe from French or Native Americans incursions. The British Parliament reasoned that the colonies should chip in a bit to pay for their own security.

Finally, the Stamp Act of 1765 was imposed on the colonies because Britain wanted to generate more revenue from their overseas territories. In their minds, the American colonies should have been a money making territory, instead it cost the British Crown a lot of money to maintain and defend those colonies.

To gain greater understanding of why Britain passed the Stamp Act of 1765, read more about the major event that directly left Britain in so much debt: the French and Indian War (1754 – 1763). Also, check out the Treaty of Paris (1763) that helped bring the Seven Years’ War to an amicable conclusion.

The American Colonists’ Argument against the Stamp Act

The resistance against the Stamp Act was more of an issue of representation rather than the monies that were to be collected. Starting in places like Massachusetts and Virginia, the likes of Samuel Adams and his second cousin John Adams (later 2nd President of the United States) called for the colonies to band together to put up a coordinated resistance against the Act. 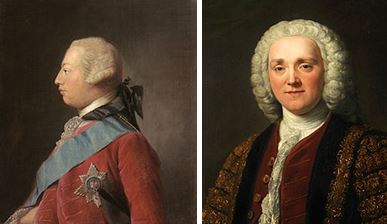 Obviously, this was a hard pill to swallow for the colonists. They simply wanted one of theirs sitting in the British Parliament, representing and fighting for the interests of the American colonists.

Besides, the British economy at that time was in a bit on the downside after the French and Indian War. The British government genuinely thought that the Stamp Act of 1765 was fair. 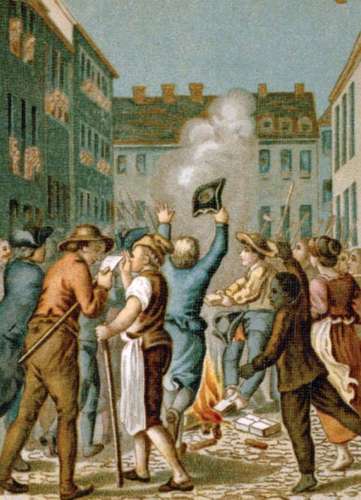 Sons of Liberty caused major disruption in the colonies by burning copies of the Stamp Act in 1765 | Image: Library of Congress, Washington, D.C.

The American colonists were absolutely incensed, particularly the elites and literates. The Stamp Act of 1765 basically made the activities of the likes of lawyers, newspaper operators, and among many others, extremely difficult. It was crippling their businesses, as they relied heavily on printed materials. Therefore, lawyers in the colonies took to protests. Additionally, some of them resisted through legal means in the courts.

As for sailors, playing cards and dice were staples in their business. The taxes imposed on those commodities were something that sailors and other blue color workers could not endure. This was the group of people that had greater tendency to partake in more violent protests and public disorder.

On August 14, 1765, a group of protesters hanged an effigy of the stamp man before setting it ablaze. This was an intimidation technique deployed by the colonies to scare the stamp tax collectors.

Then there was the terrible incident that took place on August 26 at the premises of Lieutenant-Governor Thomas Hutchinson – the chief justice in Massachusetts. Privately, Hutchinson was against the Act; however, due to his position as an official of the British government, he had no choice but to publicly support the Stamp Act. This infuriated the protesters. They stormed into his house and ransacked the place, leaving the governor and his family escaping by the skins of their teeth. Shortly after this, violent seizures of stamp papers from the British officials became the norm of the day. 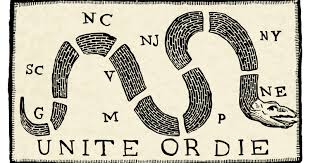 The Unite Or Die phrase

John Dickinson, a Philadelphia lawyer, stated that it was vital that the colonies came together to deliver a unified and coordinated boycott  of everything that was British, including British goods. And so the Stamp Act Congress was born. It was the first assembling of representatives from the various colonies. Nine of the 13 colonies gathered at Federal Hall, New York City in October 1765. The remaining three colonies – North Carolina, Virginia, and Georgia – were not allowed to join by their respective colonial governors.

The Declaration of Rights and Grievances

In October, 1765, delegates to the Congress of 1765 (Stamp Act General Assembly) went ahead to meet without the permission of the British government. The Chairman of the Congress was Timothy Ruggles. Although Ruggles was a devout loyalist, he still partook fully with the rest of the delegates in condemning the Stamp Act.

Then there was James Otis, a Massachusetts-based lawyer and a member of the legislative assembly of Massachusetts. Otis was largely considered the most vocal member of the Stamp Act Congress. He was crucial in rallying the other delegates to the Stamp Act Congress to pass the Declaration of Rights and Grievances on October 19, 1765. The declaration, which had 14 points of protest, appealed to King George III to allow assemblies in the colonies impose their own direct taxes. They even sent several letters to the king, the British House of Lords, and the House of Commons. To no avail, their pleas were emphatically ignored.

Origin of the Phrase: ‘No Taxation Without Representation’

From left to right: Samuel Adams, James Otis, John Adams, and Benjamin Franklin – Key opponents of the Stamp Act of 1765

In five resolves, Virginia categorically stated that the colonist were full-fledged British citizens and as such must give their consent to any taxes that were to be levied on them. The Virginia Stamp Act Resolves drew a lot on the Magna Carta – a 13th century charter that stated that British monarchs must seek the consent of the governed/citizens before imposing taxes on them.

Patrick Henry, and a host of other leaders from the various colonies, fought to bring down the Act. Soon, the phrase ‘No Taxation Without Representation’ was coined, spreading like wild fire through the colonies.  It is generally accepted that the phrase was coined by James Otis of Massachusetts.

Was the Resistance to the Stamp Act related to the calls for independence?

At no point in time were the colonies pushing for independence at that stage. It was inconceivable at that point. What the colonies simply wanted was for them to be giving a voice in the British Parliament, the same voice that a Briton living in London or Liverpool had.

Well, the British Parliament did not budge; and parliamentarians in London were expecting the resistance to die down within a few months. Unbeknownst to them, the colonies had an even greater resolve to see their fight for representation through.

The Sons of Liberty

American colonies did what every furious/irate citizen, a citizen who had been stripped off his rights, would do. With catchphrases like,  “taxation without representation is tyranny”, the colonists protested like never seen before.

A wave of anger and violence spread across the colonies. Particularly in Boston, Massachusetts, the protest made the state ungovernable. In the summer of 1765, a group of political activists called the Sons of Liberty, led by Sam Adams, emerged in Boston. Some members of this group took to looting and destroying offices belonging to the Crown. They also burnt effigies in the streets. Tax collectors in the colonies suffered the most. Their homes were raided, and in some cases burnt to the ground. The collectors were intimidated in every manner possible.

There was an incident that involved irate mob and Boston’s stamp distributor Andrew Oliver. His house was razed to ground, forcing him to immediately abandon his job.

Repeal of the Stamp Act

Teapot marking the removal of  the Stamp Act

After less than a year since it was passed, the British government had started to feel the effect of unrelenting protests, looting, and burning of goods and properties. It spent more resource collecting the stamp tax than the actual monies collected.

Activities of British merchants and government officials were disrupted. On March 18, 1766, the British Parliament caved in and repealed the Stamp Act. This was not admission of wrong doing on their part. It simply was a tactical move. Britain still maintained that it had the right to the American colonies. Therefore, on the very day that the Stamp Act was repealed, parliament passed another act called the Declaratory Act of 1766 which insisted that Parliament had the every right to enact laws in the colonies.

Following the repeal, parliament went ahead to pass several more taxes on the colonies. Most notable of those laws was the Townshend Act of 1767, an act that imposed taxes on lead, glass, paint, tea, and paper. Then there was also the Tea Tax that ultimately led to the Boston Tea Party.

The American colonists’ first reaction to the Stamp Act was none like ever seen before. Here was a case where Britain was imposing a direct form of taxes on British citizens that had no form of representation in the British Parliament.

In the nutshell, the Act had emasculated the American colonies in terms of their rights and liberties. Colonists reasoned that Britain was trying to enslave them, relegating them to the status of British servants, women, and people without properties. Those categories of people generally had no representation in Parliament at the time.

Although it was repealed as swiftly as possible, the Stamp Act had opened a can of worms that would gravely hurt the British government a decade later. Using their resistance in 1760s as a launching pad, the colonists went on to revolt and, eventually, fight for their independence throughout the 1770s.

Interesting Facts About the Stamp Act

To read the full text of the Stamp Act of 1765, please visit this link.