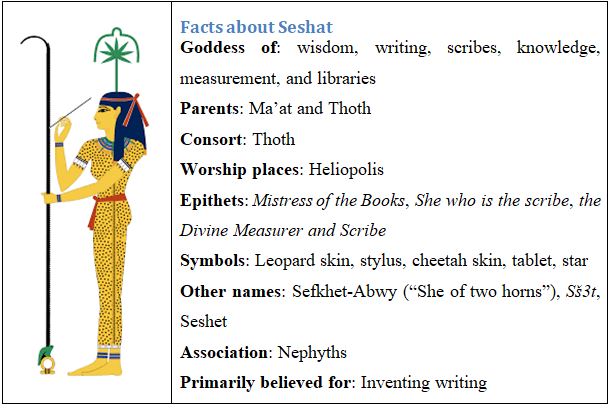 Considered as one of the lesser known and revered deities in ancient Egyptian religion, Seshat was seen as the goddess of wisdom, writing, libraries, and measurement. The Egyptians considered Seshat and her consort/father Thoth as the divine scribes of the land. She was generally depicted as woman dressed in a panther skin with a headdress made of horns. She is the ruler of books, thereby alluding the association with knowledge and wisdom.

Paintings and carvings of the goddess Seshat have been traced down to the Old Kingdom (c. 2686 – c. 2134 B.C.E) and Middle Kingdom (c. 2040 – c. 1640 B.C.E). Seshat was believed to have been born to the Thoth, the Egyptian god of wisdom and time, and Ma’at, the goddess of truth, law and order. Her role as the goddess of the written word was likely derived from her father Thoth, who by the way was revered as the deity that invented and introduced hieroglyphics to the Egyptians.

In the Early Dynastic Period, Seshat was primarily worshiped as the patroness of writing and measurements. She was also seen as the divine record-keeper – a deity who put everything that occurred in the day in writing. Towards the Middle Kingdom (c. 2040 – c. 1640 B.C.E), Seshat’s role incorporated the recording of events that transpired during the pharaoh’s military campaigns – this included the all the foreign slaves captured, as well as the booty from a military conquest.

Whereas her father Thoth was revered as the chief male scribe, Seshat was described as the “Female Scribe”.

Much of Seshat’s role in the Egyptian pantheon was derived from her father, the god Thoth. During the Pre-dynastic era, she was given a narrow role that saw her serve as the goddess of writing and measurement. She took record of the daily activities, particularly those involving the Egyptian pharaohs and other nobles. By the Middle Kingdom era, Seshat’s role had grown into one which saw her record a wide array of things, including taking records of the tributes received by the pharaoh from foreign rulers. She was also in charge of recording the years that a pharaoh reigned. She recorded the pharaoh’s speeches.

Considering how much of an importance accurate measurement was to the Egyptians when it came to building, Seshat was revered to a large extent by builders, architects and other artisans. She was regarded as the patroness of land surveyors. She thus became the patroness of mathematics, building, and accounting.

Being a “female scribe”, Seshat was also involved in taking measurements of celestial bodies and events. This meant that she was associated with astronomy and astrology.

As the divine measurer and scribe, she is believed to have assisted the pharaohs when it came to constructing temples and burial tombs. For example, she was involved in a ceremony called “Stretching the cord ritual” (“pedj shes”), which saw architects and builders layout the foundations of temples and other religious structures. The ancient Egyptians prided themselves with their precise alignment of religious structures or tombs of a pharaoh with some heavenly bodies. This was done in a bid to invoke the blessings of the gods. It also allowed the dead pharaoh to make a safe passage to the afterlife.

Seshat association with knowledge and writing made her the patroness of libraries and librarians. Owing to this, she earned the epithet “Mistress of the House of Books”. She was famed for being the Divine Keeper of the House of Life (Per-Ankh), which was a combination of a temple library and school.

The goddess Seshat was usually depicted as a young woman wearing the hide of a leopard or a cheetah. On top of her headdress was a seven-pointed star or emblem, whose meaning remains relatively unknown to this day. The seven-horned headdress has been explained as a symbol of authority, i.e. Seshat’s divine authority.

Other symbols of Seshat that reflect her role in the Egyptian pantheon include knotted cords, tablet, and the stylus. For example, the knotted cord was an instrument frequently used by land surveyors in making measurements.

Seshat’s importance lied in the rudimentary activities of Egypt. And although her role was not as glossy as the roles of the likes of Isis, Anubis or Horus; Seshat was still vital to the Egyptians.

First, she was very much involved in Sed festival – a festival that celebrated the pharaoh’s reign over Egypt. With the passage of time, Sed festival became an occasion to celebrate a pharaoh’s 30th anniversary on the throne. They were seen as ceremonies that imbued in the pharaoh long life and strength to rule.

As a scribe, Seshat’s writings and recordings were considered extremely important and sacred. As a result, enormous attention was paid to writing and books. This explains why Egyptian texts such as the Book of the Dead and the Pyramid Texts were held of high importance to the Egyptians.

The goddess Seshat was also responsible for census-taking in Egypt. The ancient Egyptian pharaohs knew the importance of census, as it allowed the grand vizier and other royal officials to make plans.

It was also believed that the goddess Seshat and the goddess Nephthys helped the dead in the afterlife. They prepared the dead for judgement in the Hall of Truth, where the heart of the dead is weighed against the feather of Ma’at.

Ancient Egyptian society was a fairly egalitarian one. Priesthood and other high-ranking jobs were not the preserve of men. In fact, women held an important place in the society. This was evident in the manner in which they revered their female deities. In this vein, it is safe to say that female scribes and priestess of Seshat were a valuable component of the Egyptian society. The priestesses of Seshat were responsible for carrying out “stretching the cord” ritual.

Compared to other major Egyptian deities, Seshat did not have as many established cult following or a formal places of worship. However, it has been stated that the city of Heliopolis took host to sizable sanctuary of the goddess Seshat. Even though no evidence of her ever having a temple, there are many temples across Egypt that have depictions of Seshat.

Other interesting myths and facts about Seshat