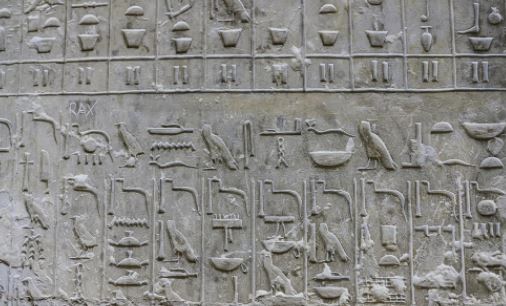 In the late 19th century, Gaston Maspero, a French archaeologist and Egyptologist, made a startling discovery that changed the way we viewed ancient Egyptian funerary and religious rites. Maspero, who was also the director of the French Institute for Oriental Archaeology in Cairo, discovered the famous ancient Egyptian Pyramid Texts in a number of pyramids in South Saqqara, Egypt.

Many scholars and Egyptologists, including the famous French archaeologist and chief excavation officer in Cairo,Auguste Mariette, had long held the belief that underground chambers and rooms in the pyramids contained no hieroglyphs written on their walls. Maspero’s findings proved otherwise, as there was more than enough evidence to show that ancient Egyptian pyramids could also have writings or hieroglyphs on their walls.

What are the Pyramid Texts?

The Pyramid Texts refers to a set of mortuary and funerary texts ancient Egyptians believed to grant protection to the dead pharaoh or queen in the Afterlife. The texts, written in Old Egyptian (hieroglyphs), comprised mortuary prayers, incantations, hymns and spells that were believed to sustain the pharaoh throughout his/her journey in the land of the dead.

It was also very common for the Pyramid Texts, which were written on the walls of the pyramid or  the sarcophagi of the deceased, to mention the personality, role, and accomplishments  chalked by the pharaoh during his/her reign.

Sections of the Pyramid Texts

The Pyramid Texts contained spells that could be divided into two parts – the Personal section and the Sacerdotal section.

The Personal Section contains spells intended to usher the deceased pharaoh’s spirit out of the tomb into the afterlife. The spells beseech the gods to give protection, sustenance, and safe passage to the deceased. With regard to the protective text, the spells cover protection for both the deceased’s body and tomb, invoking protective deities like Anubis, Isis, Sekhmet, etc.

The Sacerdotal Section contains a set of rituals carried out by the priests who offer short instructional spells. They were designed to inform the deceased pharaoh how he/she is supposed to get to Afterlife. Often times, this spell saw the priest address the deceased in the second person.

Did you know: When invoking the help of the gods, the priests sometimes threatened the gods if they failed to provide adequate protection or safe passage to the pharaoh? 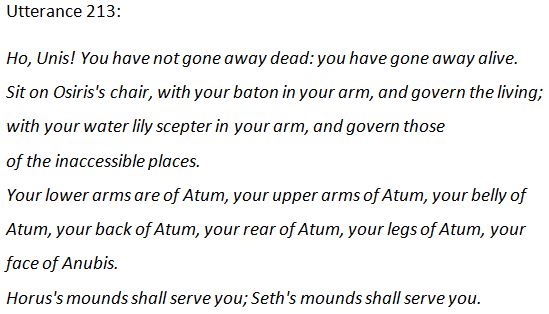 Pyramid Texts on the walls of Pharaoh Unas’ burial chamber

The Pyramid Texts are regarded as the earliest known ancient religious and funerary writings in the world. The go all the way back to the late Old Kingdom ( c. 2686 BCE – c. 2181 BCE).

Scholars and archaeologist estimate that the Pyramid Texts were in vogue starting from the Fifth Dynasty to the Sixth Dynasty of the Old Kingdom. The discovery of them on the walls of the pyramid of Qakare Ibi, a pharaoh of the Eight Dynasty, shows that it is possible there are more, from different dynasties and kingdoms, just waiting to be discovered.

Written in Old Egyptian, the Pyramid Texts were carved into the walls and the sarcophagi of pyramids.

So far, all the discoveries that have been made are located in Saqqara, Egypt. The earliest known Pyramid Texts date to around 2400-2300 BCE. Those particular Pyramid Texts belong to Pharaoh Unas of the 5th Dynasty.

The Pyramid Texts were solely reserved for the ancient Egyptian kings and queens. None royals and non-ranking members of the Egyptian society used the much later Book of Dead or Coffin Texts to cast spells for the protection and guidance of their deceased ones.

Did you know: The Pyramid Texts are the oldest known religious writings in the world?

Pyramid Texts in the various kingdoms

In the Old Kingdom, the Pyramid Texts were found solely in the pyramids of kings and queens, including Pepi II and his wives Wedjebten, Neith and Iput II.

Although the Pyramid Texts were not written in the pyramids of the pharaohs, pyramid spells and rituals for the deceased continued to be carried out during the Middle Kingdom.

During the New Kingdom (c. 1552 B.C.E – c. 1010 B.C.E), the Pyramid Texts sometimes made their way into the tombs of high-ranking officials and nobility.

Purpose of the Pyramid Texts

The Pyramid Texts were of utmost significance to the entire Egyptian society. It made up a core component of ancient Egyptian religion. It was believed that without those texts the deceased pharaoh would be unable to arrive safely in the Afterlife. Should that happen, there would be no one in the Afterlife that could help the gods (for example the sun god Ra) defeat the forces of evil or chaos (Apophis).

As a result, careful attention was paid to the set of mortuary prayers, spells and hymns uttered in the burial chamber of the deceased pharaoh. Those religious incantations allowed the soul (ka) to safely fly or leap from the land of the living to the afterlife.

Ancient Egyptians believed that the Pyramid Texts facilitated the deceased pharaoh in his quest to become an Akh, a worthy being who sits among the gods.

How were the Pyramid Texts discovered?

Pharaoh Unas’ pyramid can be found in between Djoser’s and Sekhmekhet’s pyramids in Saqqara. It was perhaps the smallest pyramid of the Old Kingdom | Image: The ruins of Unas Pyramid at Saqqara

Around 1880, French archaeologist and Egyptologist Gaston Maspero set out to investigate the inner chambers of pyramids in Saqqara, particularly those in the hill in the south.  The site Maspero chose was formerly mapped by mapped by the Prussian Egyptologist Karl Richard Lepsius in 1842.

In the course of his excavation, he discovered what he believed were ruins of the pyramid of Pepi I of the Sixth Dynasty. In the subterranean rooms of Pepi I discovered the hieroglyphic writings on the walls.

Many scholars and archaeologists, including French archaeologist Auguste Mariette, concluded that the ruins could not be a pyramid because pyramids had no writings. Mariette went to his grave reasoning that Maspero discoveries of writings were instead on the walls of a mastaba, a flat-like pyramid.

With more excavations of structures in the area, Maspero became more convinced that the writings were indeed on the walls of ancient Egyptian pyramids. For example, one kilometer away from the first dig, the pyramid of Merenre I – Pepi I’s successor – had similar hieroglyphic text on the walls.

It became abundantly clear that Maspero had discovered the Pyramid Texts of ancient Egypt as more and more texts were found in every excavated pyramid in Saqqara. Pyramids of Unas, Teti and Pepi II – all of who were of the Old Kingdom era – had hieroglyphic texts that cast enormous light on the principle and funerary literature of the ancient Egyptians.

Maspero followed his 1882 publication (in the Recueil des Travaux) of his findings with his 1894 corpora of the text titled Les inscriptions des pyramides de Saqqarah.

Importance of the Pyramid Texts

Ancient Egyptian Pyramid Texts also assured the people that death was not the end of one’s soul; rather it was simply a mechanism the soul uses to transition into the afterlife.

They also show us the extent to which ancient Egyptians revered their kings and queens. The monarchs were literary the embodiment of the gods in this life and the Afterlife. In some cases, they were depicted as more powerful than the gods, capable of devouring the gods. 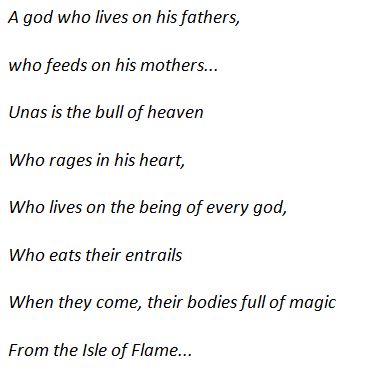 In some utterances, the Egyptian king is described as someone who hunts and eats the body parts of the gods. Those utterances have come to be called the “Cannibal Hymn”. They were intended to show how mighty the kings were. For example, Pharaoh Unas’ Pyramid Text describes him as the mighty one who, with the aid of the Old Kingdom Egyptian god Shezmu, slaughters and eats the gods.

It was believed that the kings did this in order to absorb the powers of the gods and goddesses. This allowed them to safely make it to the Afterlife. It also elevated the deceased pharaoh to a divine status, allowing him to sit among the gods.

Interesting Facts about the Pyramid Texts 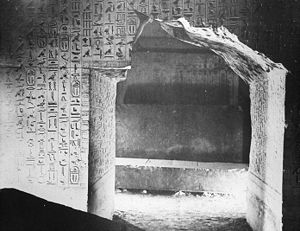 It was not uncommon for the Pyramid Texts to have in them words of offerings to the Egyptian gods and goddesses.

While burying the dead pharaoh, it was also not uncommon for prayers and monetary offerings to be conducted in the pyramids.

During the Opening of the Mouth Ceremony, priests opened the mouth and eyes of the deceased and then read out prayers and spells. While all that is done, the mourners in the background cried and delicate holes were cut in the mouth of the deceased. The essence of this funerary ritual, which was carried out from the Old Kingdom to the Roman period, was to allow the pharaoh speak, breathe, see and eat in the Afterlife.

Depictions of ramps were made to enable the pharaoh fly, run, walk or row in a ship to an eternal life of joy. With regard to the ship, Egyptians believed that it was similar to that of Ra‘s sun barge, which is also known as the Ship of a Million Souls.

Pyramid Texts for queens were a bit simpler compared to those for kings. And in Queen Neith’s case, her Pyramid Texts used her name almost throughout all the lines of the spells.

The earliest known Pyramid Texts are the ones in the pyramid of Pharaoh Unas, the last king of the Fifth Dynasty. Unas’ Pyramid Texts has about 283 spells written on the subterranean walls of the pharaoh’s burial chamber.

In 1952, Samuel A. B. Mercer became the first person to make a complete English translation of the Pyramid Texts. Mercer based his translations on the German translation (Die altägyptischen Pyramidentexte) that was done by German Egyptologist Kurt Heinrich Sethe between 1908 and 1910.