Selene in Greek Mythology | Selene – the Greek goddess of the Moon | Image: Detail of Selene from a Roman sarcophagus

Goddess of: the moon

Selene, Latin name Luna, ancient Greek goddess who was revered as the personification of the moon. Her worship frequently occurred during new and full moons. She was the daughter Greek Titans Theia and Hyperion. Her siblings were Eos (Dawn) and Helios (Sun).

Through her Titan parents, Selene is the niece of Phoebe, a first generation Titanese whose name means “shining”.

According to Hesiod’s Theogony, Zeus, the king of the Greek gods, was sometimes considered her consort. And in some cases Greek sun god Helios was seen as Selene’s father.

In the Homeric Hymn to Selene, the goddess is described as the deity who holds the beautiful Pandeic to Zeus. Thus, Selene and Zeus gave birth to a daughter called Pandia (“all-brightness”).

The Homeric Hymn to Helios

In Homeric Hymn to Selene, the goddess is described as very beautiful with “rich” and “bright” hair. For this, she was given the epithet “lovely-haired” by Epimenides. In some depictions of Selene, she can be seen with long wings.

She is often depicted with the crescent moon on her head while in the presence of many stars. Another important symbol of hers is her two-horse chariot. Pulled by those two powerful winged horses, Selene drives the moon across the midnight heavens.

Other epithets of Selene include: “all-wise”, “all-seeing”, “foe of strife”, and “beautiful haired”. The ancient Greek master of tragedy Aeschylus (c. 525-c. 456) described Selene as “the eye of night”.

There have been some depictions of Selene that a nimbus placed around her head while holding a torch.

In some myths, Selene’s chariot is drawn by bulls or oxen.

Selene has a two-horse chariot, while her brother the sun god Helios has a four-horse golden horse.

Selene and the Greek god Pan 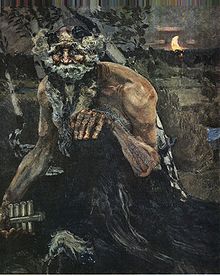 The Greek god Pan is often depicted in a bestial form and possessing an extreme level of lust. | Image: Pan, painted by Mikhail Vrubel in 1899.

Pan, a fertility god in Greek mythology, is believed to have wrapped his body in sheepskin and then seduced the goddess Selene with a “snowy bribe of wool”. 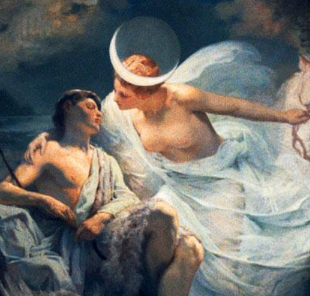 Selene goddess and Endymion, who is described in Greek mythology as a mortal man of extraordinary beauty.

In Greek mythology, Endymion was the youth who spent much of his life sleeping in order to stay forever young. In some accounts, Endymion requested this ability from Zeus, the king of the gods in Greek mythology. However, in some versions, Endymion was cursed by Zeus to sleep perpetually after the youth tried to bed Zeus’s wife, Hera. This view is shared by Epimenides of Cnossos, a semi-mythical 6th century BC philosopher.

Selene is most famous in Greek mythology for her romantic affair with the mortal Endymion. According to Apollonius of Rhodes’ Argonautica, Selene had a “mad passion” for Endymion. She could not help herself but pay him a visit every night to watch him sleep in a cave on Mount Latmus. Selene and Endymion bore fifty daughters.

The Greek goddess Selene was said to have fallen head over heels for the mortal Endymion. Every night, she would pay him a visit and watch him while he slept in the inner sections of Mount Latmus in Caria. The relationship between Selene and Endymion brought forth 50 daughters. The 50 children represented the fifty lunar months found in the Olympiad (i.e. a period of four years in which the Olympic Games took place).

Selene and the Nemean Lion

According to some accounts, the Nemean lion, a powerful and fearsome monster who was ultimately slayed by Heracles (Hercules), was an offspring of the goddess Selene. This view is shared by Epimenides and Pre-Socratic Greek philosopher Anaxagoras.

In some accounts Selene and Zeus are the parents of the Nemean lion, who was then raised by Hera. | Image: Greek demigod Heracles (Hercules) fighting with the Nemean lion, Pieter Paul Rubens.

In Hesiod’s account, however, the Nemean lion was birthed by Echidna, a half-woman, half-monster, half-snake being who isolated in a cave. With Typhon, Echidna gave birth to many fierce monsters in Greek mythology.

Epimenides of Cnossos, a semi-mythical 6th or 7th century BC philosopher

How Selene caused the death of Ampelus

Ampelus, a satyr beloved by the Greek god Dionysus, incurred the fury of Selene after he boasted he was better than Selene in all aspect. Enraged by Ampelus’ hubris, the goddess Selene sent a gadfly to sting the bull that Ampelus was riding on. Ampelus’ bull screamed in pain and flung Ampelus off his back before trampling him to death.

Selene and the nymph Myia

In one of the myths, a nymph called Myia incurred the wrath of the goddess Selene. Myia, taken aback by the sheer beauty of Endymion, could not help herself but talk continuously to Endymion while he slept. A very jealous Selene put a stop to Myia by turning her into a fly. This myth was ancient Greece’s way of explaining why flies tend to irritate us, especially when sleeping.

The battle scars on her orb

Most likely during the Gigantomachy – a fierce battle between the Olympians and the Giants – a ferocious giant by name of Typhon attacked Selene. A horde of wild bulls were sent the goddess way. Regardless, she was still able to fend her attacks off, standing tall against Typhon. Selene would sustain a number of battle wounds which later turned into the scars on her orb.

How Selene helped Zeus and the Olympians defeat the Giants

The ancient Greek mother goddess Gaia sunk into a deep sadness after hearing of children’s (i.e. the Titans) defeat at the hands of the Greek Olympian gods during the Titanomachy.

Desiring to free the Titans from their prison in Tartarus, Gaia sent an army of giants to take down Zeus and his Olympian gods. However, she first sought a powerful herb that would make the giants indestructible.

When Zeus heard of Gaia’s quest for the special herb, he asked Selene and her siblings – Eos (dawn) and Helios (sun) – not to shine their light. Under the cover of the dark, Zeus and his associates proceeded to harvest all the special herbs, preventing Gaia from getting hold of the herb in the first place. 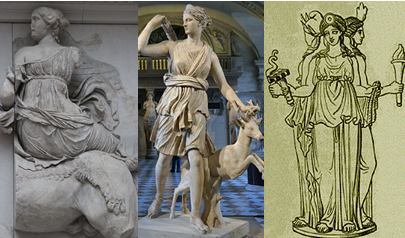 Selene and Greek goddesses Hecate and Artemis were the three major lunar deities in the Greek pantheon. Her association with those two Greek goddesses allowed her to earn epithets such as Cynthia and phoebe. This means that she was associated with the Titaness Phoebe, daughter of Uranus and Gaia.

Read More: List of Roman Gods and the Greek Equivalents 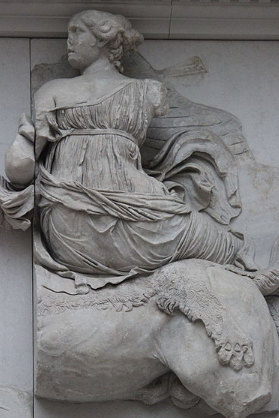