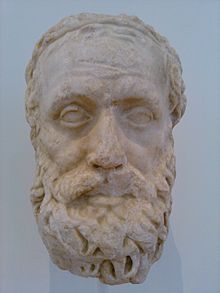 Aeschylus (ca. 525-456 BCE) was one of the three most influential ancient Greek tragedians, i.e. writers of tragedy. Born in Eleusis, a place near Athens, Aeschylus is known for authoring masterpieces like Seven Against Thebes (c. 467 BCE), Prometheus Bound (c. 430 BCE), The Persians (472 BCE), Eumenides (458 BCE), and Agamemnon (458 BCE).

He was skilled at brilliantly exploring and depicting evil, as well as showing the fear and consequences of evil actions. But in some cases, he weaved the plot in a manner that it ended with some sort of reconciliation for the individual or the society. His plays had a huge impact on the tragedy genre, catapulting it to immense heights for the other two great Greek tragedians – Sophocles and Euripedes – to build upon.

In his mid-30s, Aeschylus fought as a soldier in the Battle of Marathon (490 BCE), defending his homeland against the Persian army. What else is Aeschylus famous for?

The article below contains the life and major achievements of Aeschylus, the Greek writer most known as the “Father of Tragedy.”

Most known for: the first of the three great ancient Greek writers of tragedy

Aeschylus, the first of Athens’ great tragedians, was born at a time when tensions between Greek city-states and the Persian Empire in the east were heating up. Domestically, Aeschylus’ society was still recovering from a chaotic phase that saw them replace tyranny and absolute rule with Athenian democracy. Amidst all that the Persian rulers readied themselves for a series of invasions of Greek cities.

Determined to halt the Persian army in their tracks, Aeschylus enlisted himself in the army and fought against the invaders. He was part of the Greek alliance that distinguished themselves bravely at the Battle of Marathon (490 BCE) and the battles of Artemisium and Salamis (480 BCE). In the former, he is said to have sustained a big but non-life threatening injury as Xerxes the Great and his Persian army decisively defeated by a vastly outnumbered Athenian forces.

Did you know: Aeschylus’ exploits at the Battle of Salamis in 480 BCE got mentioned in a number of his plays, particularly in the play The Persians (472 BCE)?

Aeschylus was part of the Greek forces that defended their cities during the Persian invasions of Greece (i.e. the Persian Wars). He even fought at the Battle of Marathon (490 BCE) to defend his homeland against the Persian army. | Quote by Aeschylus in his play “Agamemnon”

Placed in the elite group of three very distinguished Greek writers, Aeschylus was a master when it came to writing Greek tragedies. He is said to have bagged more than two dozen prizes in his lifetime.

In 484 BCE, coincidentally the year another great tragedian Euripides was born, Aeschylus is said to have claimed his first prize for drama.

About a decade before his exploits at Marathon, in 499 BCE, Aeschylus partook (likely his first time) in the Great Dionysia, a very large dramatic competition that attracts a sizable number of dramatists from all over Athens. The competition was just one of the major events that occurred during the festival of Dionysus (Greek god of theater, wine and wild abundance). Patrons of the festival would revel in three of the best tragedies produced by participants of the competition.

Historians have stated that his earliest known work, Persians, won top prize in a competition held in the spring of 472 BCE.

In his latter career, he had written so many brilliant plays, making him an admirable figure in his city and beyond. With that success came a slight rivalry between himself and a rising and young dramatist known as Sophocles. At a Dionysian festival in 468 BCE, Aeschylus was defeated by the younger poet. In the following year’s competition, in 467 BCE, he wrestled back the top prize with his entry Oedipus trilogy.