The Story of Helios, the Greek God of the Sun 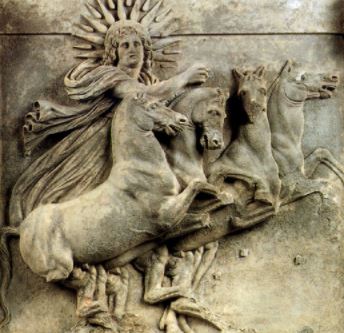 Even to this day, it is not uncommon for one to come across stories of Helios (Helius, Illius), the Greek god who pulled the sun across the sky with his magnificent, golden chariot. According to Homer, Helios’ temple sites were common on the islands of Thrinacia and Rhodes. The ancient Greeks also considered any island that received adequate amount of sun the territory of this chariot-driven solar deity. Over the centuries, he’s been commonly depicted as a handsome, young man with sparkling headdress.

Here is everything you need to know about Helios, the Greek god (Titan) of the Sun.

Siblings: Selene (the goddess of the moon) and Eos (Dawn)

Epithets: ‘the radiant’, ‘gracious’ or ‘the all-seeing’

Meaning of his name

In ancient Greek religion, the deity Helios was in fact a Titan – one of the oldest solar deities for that matter. Being the deity that literally personified the Sun, he had many epithets including “The One High Up” (Superus); ‘the all-seeing’ (Panoptes); Elector (which means radiant or beaming); and Elektor Hyperion (“the radiant”).

Considering the role that he played in the Greek pantheon, he was also been called Hekatos, a name which evokes a sense of “gracious” light.

Helios was born to the Titans Hyperion (‘the High One’) and Theia (‘divine’). As a result, he could be considered the brother of Eos (the goddess of dawn) and Selene (the goddess of the Moon).

Both parents of Helios were offspring of Uranus (Father Sky) and Gaia (Earth). Hyperion, a Titan in charge of light and wisdom, was believed to be one of the four pillars that kept the heavens (Uranus) above the earth (Gaia). Theia, on the other hand, was a divine deity of light, beauty and precious metals.

He married Perse and went on to have numerous children, including – Circe, Aeetes, Perses, and Pasiphae. From his numerous extramarital affairs, the solar deity gave birth to likes of Phethusa, Phaeton, Heliades (daughters of Helios), Aeetes, Charites, and Lampeta.

The ancient Greeks depicted Helios as a very young and handsome man with a radiant crown. His crown was made of shinning arrows or aureole. Almost all the time, he is shown with his four-horse chariot (a golden chariot). The names of his four horses are Pyrois (“the firey one”), Aethon (“blazing”), Eos (“belonging to the dawn”), and Phlegon (“burning”).

How important was Helios?

Helios’ importance in ancient Greece (particularly on the island of Rhodes) was quite pronounced because he was seen as the bringer of life and daylight. After he was woken up by the rooster, he began his journey by driving the sun from east to west on a daily basis. It was also believed that the sun god sailed in a large golden cup around the northerly Oceans of the world.  He was also the protector of oaths.

As the god of sight, Helios’ powers were immense. He was strong, fiery, bright, and hardworking. He was also considered a very wise and intellectually gifted god.

The Greeks saw him as the creative power behind the Sun. And to some, he was the god of light, creation and life itself. According to Homer, wherever Helios drove his chariot, he brought joy, laughter and prosperity.

Being the source of life, he had the ability make things grow or regenerate. His laugh even had the ability to make plants sprout, making life grow abundantly on the Earth.

Beginning around the 5th century BCE, Greeks on the island of Rhodes considered Helios the chief god of the pantheon. Legend has it that a huge statue – the Colossus of Rhodes – was erected in his honor on the island. The statue is generally considered one of the Seven Wonders of the Ancient World.

Another very important worship center of Helios was at the island of Thrinacia. Although the island’s whereabouts remains unknown to this day, Homer stated that the place was rife with many worshipers of Helios.

Generally speaking, the Greeks considered all lands that received ample amounts of sunshine the territory or dwelling place of Helios.

The ancient Greeks had several deities associated with the sun. The common solar deities that come to mind are Helios and Apollo – both of whom were revered as sun gods. For starters, Helios is generally regarded as a member of the Titans – the old gods that existed before the Olympians came onto the scene. Apollo, on the other hand, was an Olympian. He was the twin brother of the goddess of the hunt, Artemis. In addition to being a solar deity, Apollo was associated with poetry, medicine, prophecy and music.

According to Homer, Apollo was in fact a different god. Unlike Helios who was often associated with gold, Apollo had a silver bow. Thus he initially had no solar traits. However, with the passage of time, as well as the fading away of Helios, Apollo gradually came to be identified with Helios. In Euripides’ play titled Phaethon, Apollo is seen in the same light as Helios. This identification was more pronounced during the Hellenistic period, appearing in texts written by the likes of Plutarch, Crates of Thebes and Empedocles.

Odysseus and the Cattle of Helios (the Oxen of the Sun) 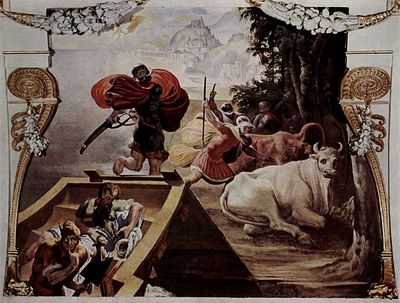 Lost at sea (owing to a storm sent by Poseidon), the Greek hero Odysseus and his crew disembarked on the island of Thrinacia. Odysseus’ second in command, Eurylochus, pleaded with Odysseus to allow the men to disembark and prepare dinner on the island. The Odyssey goes on to say that Odysseus warned his men not to touch the island’s sacred cattle (or oxen). After a few days, the men begin to run out of food. Eurylochus orders the men to go into field and pick the best of the island’s cattle so they can feast on it. Unbeknownst to the men, the cattle belonged to Helios.

According to the Odyssey, the cattle, which were taken care of by his daughters (Phaethusa and Lampetie), were handsome, fat, and straight-horned.

Angered by Odysseus’ crew’s insolence, Helios called on Zeus to punish the culprits else he, Helios, would take the Sun to the Underworld. Zeus uses his lightning bolt to strike the men on the ship, killing all of the crew except for Odysseus, who swims to Calypso’s island.

Other interesting facts about Helios 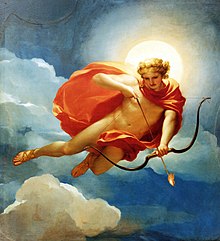