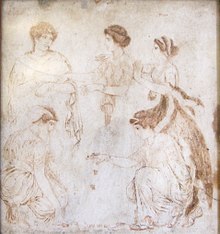 Phoebe in Greek mythology | Fresco by Alexander of Athens, 1 AD

Goddess of: light, the moon

In Hesiod’s Theogony, Phoebe is one of the 12 Titans born to Gaia and Uranus. Those Titans were Crius, Cronus, Rhea, Coeus, Hyperion, Iapetus, Oceanus, Mnemosyne, Tethys, Theia, and Themis. She also has other categories of siblings – the Hekatonkheires and the Cyclopes.

In addition to being called “shining”, she was also known by epithets like “Gold-Crowned”.

According to Greek tragedian and dramatist Aeschylus (525-456 BC), the Titaness Phoebe was the one who bequeathed the Oracle at Delphi to Apollo. Prior to Phoebe, the Delphi Oracle was owned by her sister Titaness Themis, the goddess/personification of justice, law and divine order.

In many accounts of her myths, she was associated with Greek deities such as Selene, the personification of the moon, and Artemis, Greek goddess of the moon and the hunt.

Ancient Romans identified her with the Roman lunar deity Diana.

In Greek mythology, her name Phoebe epitomizes the concept of light or moon. This explains why Artemis and Selene were sometimes known as Phoebe, while Greek gods Apollo and Helios were sometimes referred to as Phoebus, the masculine version of her name.