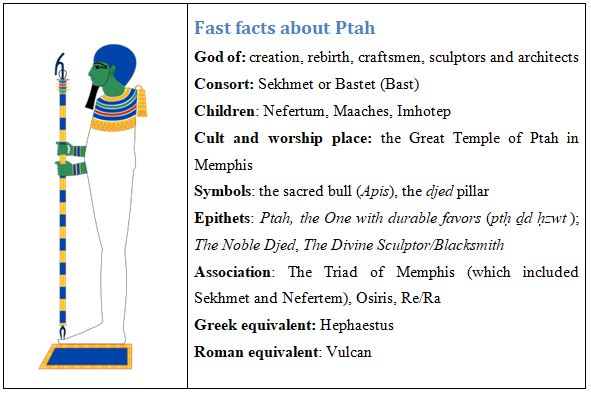 Ptah is the ancient Egyptian god of craftsmen and architecture. Revered as a creator-god, Ptah was regarded as one of the three Memphite deities in the city of Memphis.

As Ptah was the god of creation, he was typically depicted as a man with green skin holding an ancient Egyptian scepter called Was. The typical symbols of Ptah are the djed pillar and the sacred bull called Apis. The ancient Greek and Roman equivalents of Ptah are Hephaestus and Vulcan respectively.

Read on to discover the major myth and facts surrounding Ptah’s worship and importance in ancient Egypt.

Ancient Egyptians believed that Ptah was the chief architect of the universe; he was the deity from whom everything that is or will ever be emerges. As the creator god, Ptah was believed to have created the world from the thought of his heart. Subsequently, his words gave meaning and shape to the world. His words were believed to have magical properties that could bring whatever his heart desired.

What the above means is that Ptah was not born; rather, he brought himself into existence.

Ptah, the patron god of arts and craftsmen, is often paired with the goddess Sekhmet as his consort/wife. It was believed that the two deities gave birth to the youthful deity called Nefertem (Nefertum- the Lotus god). All in all, those three deities make up the Memphite Triad of gods – a widely worshiped trio in the ancient city of Memphis.

In some accounts, his wife was rather Bast (Bastet), the Egyptian goddess of domestic cats or lionesses. From that union, the lion-headed god Maahes was born.

There a several variations of Ptah’s name, including Pteh and Peteh. However, the meaning of Ptah remains shrouded in mystery. According to some myths, his name can be interpreted as ‘sculptor’ or ‘opener’. The latter meaning most likely refers to his role in the underworld. Considered a funerary deity, Ptah is believed to be the one who “Opened the Mouth” of the dead, allowing them to speak, eat, hear and see in the afterlife.

Here are some common epithets associated with Ptah:

Worship of Ptah was very much widespread, particularly in the Old Kingdom. His popularity was chiefly because he was the god of craftsmen. In ancient Egypt, craftsmen held very high status with many of them well-sought after to design and build pyramids and other magnificent ediface. Therefore, the high priests in the various temples of Ptah were considered very important members of the society.

Undoubtedly, the two most common ancient Egyptian cities for the worship of the god Ptah were Thebes and Memphis. The latter city – which was located in Lower Egypt – was in fact considered Ptah’s home region. Memphis had several temples in honor of the god. Owing to the political influence Memphis had in the region, Ptah’s worship became widespread across ancient Egypt.

In Thebes, Ptah’s popularity was mainly as a result of the sheer number of artisans and craftsmen that built and decorated the royal tombs.

Historians and archaeologists reason that Ptah was predominantly worshiped during the Late Period in Egypt’s history.

In the 19th Dynasty for example, Ptah was among the four most important deities of the era. And throughout the Third Intermediate Period, coronation ceremonies of Egyptian pharaohs were usually held in the temples of Ptah.

Historians have stated that Ptah incorporated the attributes and roles of some Memphite gods, such as Sokar and Tatenen.

In Sokar form, Ptah was often associated with Osiris. Additionally, he was also seen as the patron god of the necropolis of Saqqara.

In the form of Tatenen, Ptah was not only revered as the patron god of metalworkers but he was seen as the one who caused earthquakes.

During the Amarna Period (later part of the Eighteenth Dynasty of Egypt), Ptah was seen in similar light as the all father god Re or Aten.

Interesting Fact: The Greek and Roman equivalents of Ptah were Hephaestus (the Greek god of fire and volcano) and Vulcan respectively.

Ptah myth and meaning | Seal ring featuring the inscription ptḥ ḏd ḥzwt Ptah, which translates into “Ptah, the one with durable favors”

Ancient Egyptians had many symbols to represent the god Ptah. The commonest ones were the bull and the djed pillar.

In terms of depictions, Ptah could take different forms. The depiction of gods in a variety of forms was quite a common phenomenon in ancient Egypt. In Ptah’s case, the creator god was sometimes depicted as a dwarf. In other cases he is seen as a deformed man without clothes. In his hands was a scepter that incorporated two very important ancient Egyptian symbols – the ankh and the djed. The ankh represented life while the djed pillar symbolized stability. Owing to the above symbols, Ptah was usually referred to as “The Noble Djed”.

Another common depiction of Ptah shows him wearing the famous royal/divine beard. And because he was seen as the originator of life on earth, Ptah was often depicted with a green skin.

Ptah myth and meaning | As a deity associated with the underworld, Ptah is believed to facilitate the dead during the travels into the afterlife

Considering the fact that Ptah was the creator god – a god who created the universe by his thought and by his word – his powers were beyond any other god in the Egyptian pantheon. It was from Ptah every Egyptian deity, every pharaoh and every human being emerged. Ptah was simply omnipotent with unrivaled powers.

Ptah’s divine scepter (a blend of the Djed (stability), the Was (power and dominion) scepter, and the Ankh) was crucial in creating the universe and the first Egyptian deities.

Furthermore, it was believed that Ptah was particularly interested in architecture and other forms of craftsmanship. No deity or human being in the universe rivaled him when it came to carpentry, shipbuilding, sculpting and metalworking. This gave him unimaginable powers over all of nature’s elements – earth/metal, fire, water and air.

Importance of Ptah in Ancient Egypt

Ptah was revered as the deity who kept the world in order, preserving all life in the universe. And because the Egyptian pharaohs were crucial to this preservation, Ptah imbued in them the ability the power to maintain peace, prosperity and stability in the land.

Owing to his sheer creative prowess, Ptah was considered the patron god of craftsmen, shipbuilders and architects. It is because of these particular traits many ancient Egyptians believed that the famed architect and chief minister Imhotep was the son of Ptah. Imhotep is believed to have designed and built a number of breathtaking structures, including the famous Saqqara Step Pyramid in the city of Memphis.

Interesting fact: Did you know that the vizier and sage Imhotep was at some point worshiped by ancient Egyptians as a god, a god of medicine? He was most likely seen in similar light as the ancient Greek god of medicine, Asclepius.

Why is Ptah green? 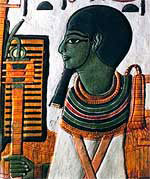 Ptah’s green skin color symbolizes* his association with mummification and the underworld. As result, Ptah was often associated with two very important deities – Osiris and Soker (Seker). Together, the three deities made up a powerful mortuary trio called Ptah-Soker-Osiris.

As a deity associated with the underworld, Ptah is believed to facilitate the dead during the travels into the afterlife. He was also credited with making the boats that ferried the dead through the underworld.

*In ancient Egypt, examples of gods with green skins are Osiris (the god of the dead and resurrection) and Geb (the god of the earth). When it came to vegetation and growth, Egyptians often used the color green (Wadj) to represent those concepts. They also associated green with death and decay and rebirth or resurrection. That explains why Osiris and Geb have green skins.