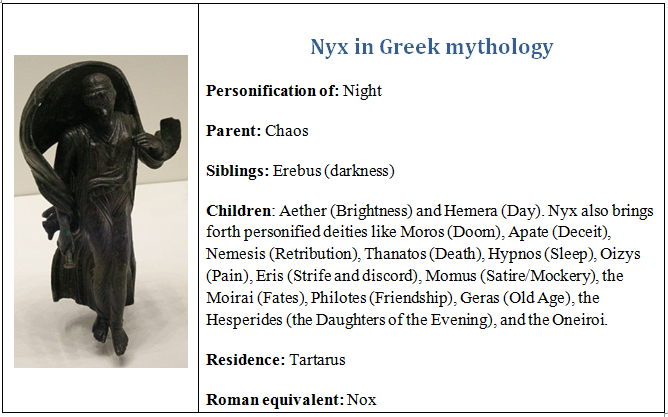 Known in Greek mythology as the personification of the night, Greek goddess Nyx was such an extremely powerful and dangerous deity that even Zeus, king of the Olympian gods, feared and stood in awe of her. Born in the depths of Chaos, a primordial entity, Nyx is portrayed as a shadowy figure that operates quite differently from other Greek gods. It was believed that she emerged at the birth of the universe.

In describing the origins of Nyx, ancient Greek poet Hesiod stated in the Theogony that the goddess is the child of Chaos, a mythological void that existed before the birth of the universe. Chaos has also been referred to as the gap that exists between the earth (Gaia) and heaven (Uranus). In the Theogony, Hesiod describes Chaos as a primordial void Chaos is located just beneath Earth but above Tartarus (the deep abyss). Chaos, according to Hesiod, was the first entity to exist. Chaos was then followed by Gaia, Tartarus, and Eros.

From Chaos, out came primordial entities like Erebus (Darkness). This means that Erebus is the sibling of Nyx. In ancient Greek religion and mythology, Erebus (Erebos) was believed to be the personification of darkness and shadows. He’s believed to have a huge presence in the underworld and in the deepest part of the earth.

As can be seen in the parenthesis above, Nyx gave birth to many children who then went on to play very influential roles in the Greek pantheon.

According to Gaius, the goddess Nyx instead fathered those children with Chaos. Those children include Fate, Old age, Death, Strife, Sleep, Dreams, Discord, Misery, Petulance, Nemesis, Friendship, Pity, Styx, and the Hesperides.

Nyx and her sibling were the offspring of Chaos, the first of all primordial deities to appear in the cosmos. Image: Nyx family tree

It was quite common for there to be variations in the depictions of many ancient Greek primordial deities. This is primarily because they represented abstract constructs. The goddess Nyx was no exception. She could be seen as the literal night that surrounds us. Alternatively, she could be seen as a beautiful woman in elegant black dress surrounded by a pitch dark mist. In some cases, she was depicted riding a chariot, a common phenomenon for many Greek deities.

She has also been depicted as a winged goddess with a dark halo cloud around her head.

Being a representation of the night, the Greeks did not have a set of definitive characteristics attributed to Nyx, other than that she was an extremely powerful deity.

Due to her father’s association with Tartarus, some ancient Greek authors opined that Nyx and her brother Erebusin Tarturus. In the Theogony, Hesiod asserts that Nyx moves in to Tartarus just as her daughter Hemera (Day) leaves the place. This cycle of Nyx and Hemera was perhaps ancient Greece’s first explanation of the cycle of night and day respectively. 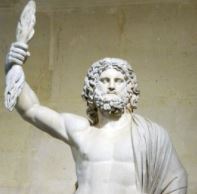 Homer describes Nyx as the only deity in the world that could stand against Zeus. Image: Zeus, chief of the Olympian gods

There is hardly any entity in the Greek pantheon capable of sending shivers down the spine of Zeus, the chief of the Olympians. Zeus was an extremely powerful whose thunderbolts could knock down the fiercest of gods or creatures. This was evident when he used them to take down Typhon, the strongest monster in Greek mythology. However, all that power of Zeus could not rival the power possessed by Nyx.

One time an angry Zeus was about to strike down Hypnos (Sleep), however upon seeing Nyx, Hypnos’s mother, Zeus stopped. Hypnos had conspired with Zeus’ jealous wife Hera to make Zeus fall into a deep sleep. With Zeus out of the way, Hera could proceed to put stumbling blocks in the way of Zeus’ son the demigod Heracles. Upon discovering Hypnos’ treachery, Zeus gave the god of sleep a hot pursuit all the way down to Tartarus. Hypnos had fled to the bosom of his mother, seeking her protection from Zeus’ wrath. Not wanting to anger Nyx, Zeus halted his pursuit and apologized to the goddess of the night.

The above explains why Homer’s Iliad describes Nyx as a primordial deity with an unbridled maternal fury.

Why was Nyx such a feared deity?

She is often seen as a deity that grants protection and safe passage to fugitives. In other words, she was known for facilitating people’s darkest actions. For example, in one of the myth, the Titan Cronos castrated his father Uranus under the cover of the Nyx (Night).

Therefore, what makes Nyx such a frightening deity has to do with the events and horrors that she could conceal. Often times, people are afraid of the things that lurk in the dark.

According to some accounts, Nyx rather than Chaos was the first primordial entity to appear.

Latin poet of the Augustan period Virgil described the goddess Nyx as the mother of the Erinyes (Roman Dirae). She bore them with Hades (Roman Pluto), Greek god of the Underworld. The Erinyes, according to Homer, are a group of female entities who punish men that take false oath. As a result, the Erinyes were sometimes known as the Furies.

In some version of the myth, Hecate, the Greek goddess of crossroads and witchcraft, is described as the daughter of Night.

Unlike her many of her children whose duties and roles were incorporated into the roles of Olympian gods, Nyx was somehow never replaced. For example the gods Apollo and Helios in some way replaced her children Hemera and Aether.