In ancient Greek pantheon, Eros, the god of love, was believed to be a primeval god born to Chaos. However, in a different account, Eros is seen as the son and constant companion of the Greek goddess of love and beauty Aphrodite. He is generally depicted as chubby infant or a handsome youth with a mischievous personality. To the ancient Romans, Eros was the equivalent of the Roman god Cupid.

Festival: the Erotidia (the festivals of Eros) 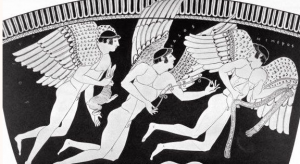 With regard to his physical attributes, he is often shown as a beautiful winged youth. For example, many Hellenistic era artists usually depicted him as an infant. The Romans knew Eros as Cupid. Image: Eros and his siblings Pothos (longing) and Himeros (Desire)

According to Greek poet Hesiod, Eros was one of four primary divine beings that emerged at the beginning of time. Thus he emerged alongside Chaos (Gap), Gaia (Earth), and Tartarus (darkness). In this account, Eros is not born. Hesiod goes further to describe Eros as the fairest of all those divine beings. He offers advice to the gods and men.

According to the pre-Socratic Greek philosopher Parmenides of Elea,  Eros was the first of all the gods to arrive. In some accounts however, he is described as the offspring of Nyx (Night), a primordial deity.

Perhaps the most popular origin story of Eros is the one which places him as the son of the Greek goddess of beauty and sexual love Aphrodite and the Greek god of war Ares. 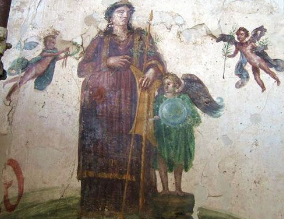 Some authors argued that Eros was not the offspring of Aphrodite. Instead he was a close companion of the goddess; Eros is believed to have witnessed the birth of Aphrodite. Due to the close relationship that exists between those two deities, later authors re-imagined him as the goddess’s offspring.

When depicted as the son of Aphrodite and Ares, Eros is considered the brother of three winged deities of love – Pothos, Anteros, and Himeros. Eros and those deities make up the Erotes, a group of love deities in Greek mythology.

In Hesiod’s Theogony, the god Eros is associated with Himeros (Desire) and the goddess of beauty and sexual love Aphrodite. Eros was said to have been present at the time of Aphrodite’s birth. Due to Eros’ frequent association with Aphrodite, some ancient Greek writers described Eros and Himeors as the offspring of Aphrodite. In those accounts, he is seen as a very mischievous and pigheaded child of the goddess.

Going by the popular account which places Eros as the offspring of Aphrodite, the god of love is often depicted as a handsome youth or an infant child. Often times he appears in the company of Aphrodite or his three other siblings – Himeros, Anteros, and Pothos. In some cases, he is depicted alongside Greek gods Hermes and Dionysus, the Charites, and the Muses.

There are also popular artworks that show him as winged plump child or baby (putto) with a blindfold. When he is not depicted wielding bow and arrows, he can be seen holding sash or a flower.

Often depicted as a bow-armed boy, Eros, the Greek god of love, usually accompanies deities like Pothos, Aphrodite, Himeros, Dinysus, Tyche, and Peitho, the Charites or Muses. In ancient Greece, it was not uncommon to have Eros’s statue and Hermes’s statue placed in front of a gymnasia. Later poets in ancient Greece and Rome sometimes depicted him as a blindfolded child.

In some accounts of the story, Eros and his sibling Anteros are considered rivals. Anteros, the god of requited love, is said to punish people who don’t return the love other people shower on them. Unlike Eros who wields bow and arrows, Anteros carries golden club or lead arrows.

According to ancient Greek playwright Euripides, Eros possesses a magical bow and a quiver that contains arrows that he uses to ignite love in people and gods.

In addition to the bow and arrows in a golden quiver, Eros was associated with a number of items, including, the ram, rose, and golden wings.

In the myths, his golden arrow was his go-to weapon when he wanted to spark love in the heart of people. All he had to do was shoot the arrow into the person’s heart.

In some accounts, Eros as a primordial being is credited with helping in the creation of the world. The power of his love helped in bringing balance and harmony in the chaotic environment that existed at the beginning of time.

Unbeknownst to many, Eros’ quiver contained two types of arrows. The first type, which have golden tip, when struck at the individual kindles love in the heart; on the other hand, the second type of arrows, which are believed to have lead in the tip, prevent the individual from falling in love.

In one of the myths, Apollo, Greek god of music, the sun and literature, incurs the displeasure of Eros after mocking the god of love. To get back at Apollo, Eros shot his love-igniting arrow at Apollo. He then shot his lead-tipped arrow at Daphne, making the mortal impervious to love advances of Apollo.

Role in the pantheon 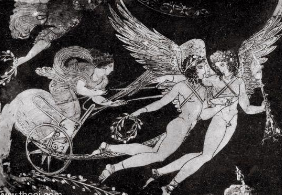 In Greek mythology, Eros is credited with imbuing in the gods passion and love. He is said to have ignited the flame of love in not just hearts of the gods, but also in human hearts. 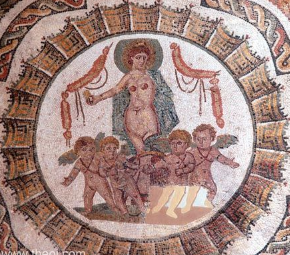 In addition to carrying a lyre or bow and arrow, many of the Erotes in Greek mythology are known to be associated with symbols such as dolphins, flutes, roosters, roses, and torches. Image: Aphrodite and chariot of Erotes, Greco-Roman mosaic from Thuburbo Majus C4th A.D., Bardo National Museum

In Greek mythology, the Erotes refer to a group of very youthful love and sexuality deities with wings. The number of Erotes varies, depending on which account one looks at. Greek gods Eros, Himeros, and Pothos (Passion) often feature heavily in the Erotes. Over time, the Erotes multiplied in the works of writers and poets. Other members of the Erotes include, Anteros (Mutual Love), Hermaphroditos, (god of hermaphrodites), Hymenaios (god of weding ceremony). In Roman mythology, the Erotes are known as Cupides, who were also known as patrons of sexual love.

The story of Eros and Psyche ranks up there as one of the most famous in Greek mythology. The story begins with the goddess Aphrodite having a tremendous amount of jealousy because the mortal princess Psyche was receiving more attention than the goddess. Men from all over Greece would throng Psyche’s home to worship her for her beauty. An enraged Aphrodite commanded her son Eros to make Psyche fall in love with the ugliest creature on Earth. Just as Eros was about to fire his gold-tipped arrow at the beautiful mortal, he accidentally scraped himself with the arrow. Eros then completely fell in love with Psyche, and the two moved away to live together in secret. Their happy-ever-after life came under serious threat when Psyche’s jealous sisters made Psyche betray Eros, causing the god of love to leave.

A heartbroken Psyche roams the Earth looking for Eros. She goes to Aphrodite and asks for help so that she could win back the love of her life. The goddess subjects Psyche to a series of very challenging tasks, which the determined mortal completes. The gods then help Psyche to reunite with her husband Eros. For her determination and devotion to Eros, Psyche is made immortal by the gods. The two then live happily ever after. Together with Eros, Psyche gives birth to a daughter called Voluptas (Hedone), the goddess of bliss and sensual pleasure.

Eros’s name comes from the Greek word for “love” or “desire”.

More on Eros in Greek mythology