Zeus dethroned his father Cronus, ruler of the Titans, with the support of his brothers, Poseidon and Hades. He then became the principal god in a novel pantheon, consisting generally of his brothers, sisters, and offspring. With his wife and sister, Hera, Zeus fathered the following children: Ares, Hephaestus, Hebe (the goddess of youth and prime love), Eris, and Enyo.

Apart from his power to govern the weather, Zeus was well-known for his lingering unfaithfulness to Hera. From his extramarital affairs Zeus bore the following children outside marriage: Apollo, Heracles (the demigod), Dionysus, Perseus (the Greek hero), Hermes, and Artemis. Helen of Troy and the Muses were just a few outcomes of his flaw for beautiful mortal women. In the Roman pantheon, Zeus corresponded to the Roman all-father god, Jupiter. In Norse Mythology, however, Zeus was seen as Odin, the one-eyed raven god. 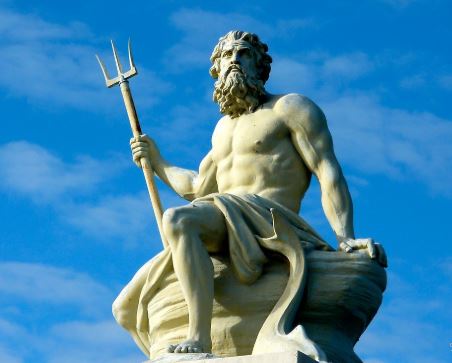 Poseidon is greatly recognized as the sea deity of ancient Greece. Apart from that, he was the patron deity of horses. He had some extremely bizarre offspring. Although he was humanoid, he begot both the flying horse called Pegasus and the Cyclops Polyphemus (the one-eyed giant), who was deprived of sight by Odysseus and his crew in the Odyssey. Other children of Poseidon include Theseus (the mythical king and hero of Athens), Neleus (the mythical king of Pylos), and Triton (god of the sea).

In some accounts of the myths, Poseidon is believed to have fathered Orion with Euryale, the daughter of Minos (king of Crete). Orion was the colossal huntsman who later became the constellation of Orion.

Typical of most ancient Greek gods, Poseidon had his fair share of consorts and lovers. Examples of Poseidon’s consorts are Amphitrite, Aphrodite, Demeter, and the nymphs Theophane and Arethusa. During the ancient Roman era, Poseidon was known as the god Neptune. 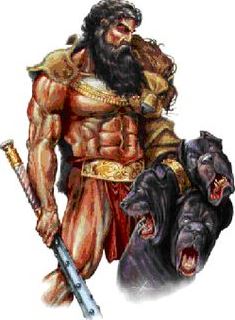 Hades governed the realm of the lifeless (the Underworld), with which he was occasionally tantamount. The frigid ruler of the netherworld was part of the little number of Greek gods that came by as being detached. He was not the decisive voice of justice of the souls that roamed his territory nor did he give out their sentences for iniquities done during their time on earth. Nevertheless, he was sly; he deceived the goddess Persephone into consuming charmed pomegranate seeds. Hence, she had to stay a part of the year with him.

Some of Hades’s offspring include Zagreus, Macaria and Plutus. In the Roman pantheon of gods, Hades was known as Dis Pater. In some cases he was called Orcus. 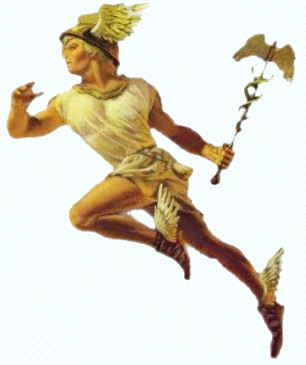 Hermes supervised various domains akin to that of the numerous deities in the Greek pantheon. He was a pastoral character, tasked with guarding farm animals, and was likewise affiliated with music, fortune, fertility, and trickery. He is portrayed as a courier god in the Odyssey. Mercury was the Roman equivalent of Hermes.

Apollo, Artemis’s twin brother, was one of the most significant among the gods. As Zeus’ son, he dispersed the resolve of his godly Paisanos using numerous ways, prophecies in particular. The Oracle that was at Delphi was his spokesperson. A 2001 research ascertained that the oracle was possible delirious owing to ethene gas arising from the rocks underneath the temple. 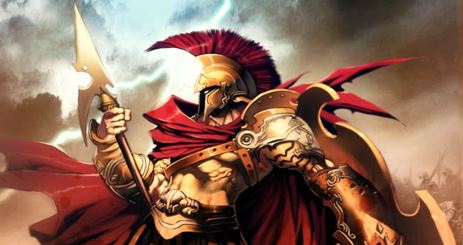 Ares was the deity of bloodthirstiness. His half-sister was the Athenian goddess Athena, who stood for the more “honorable” facets of battle and civic conduct throughout war. The Spartans had no difficulties offering captives of war to his adoration, although his fellow gods were not mostly affectionate of him. Dogs were also at times sacrificed to him. Mars was his Roman correspondent.

Read More: The Myths and Facts About Ares- the Greek God of War 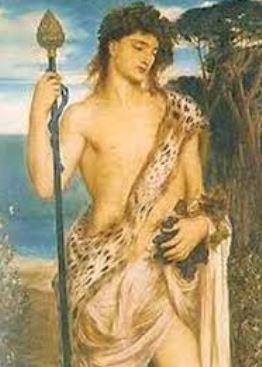 Dionysus was Zeus’s son born to a human mother. Zeus stitched the youthful Dionysus into his thigh after he had unintentionally killed his mother. When the new god, Dionysus came forth, Zeus left him in the care of the Maenads.

The Dionysus’s cult gyrated around drunkenness, sex, and barbaric ceremonial sacrifice. He was frequently represented with a bull owing to his affiliations with the animal of ritual killings. Rudiments of his personality are observed when you take a look at Bacchus, the Roman deity of wine. 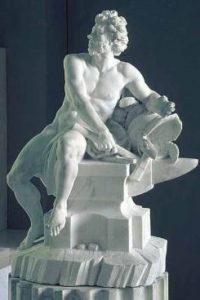 Hephaestus, the only horrible looking deity among flawlessly gorgeous immortals. He was the industrial laborer of the gods. He was the one who made their residences, fittings, and weaponry.  As a result, Hephaestus was identified as the deity of fire. In ancient Rome, Hephaestus’s equivalent was Vulcan. In ancient Egyptian mythology, the creator god and the god of craftsmen, Ptah, could be seen as Hephaestus’ equivalent. 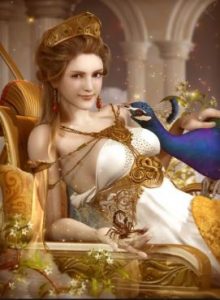 Olympus’s head goddess, Hera was both Zeus’s sister and wife. The queen of Mount Olympus was venerated by the ancient Greeks as the goddess of women, marriage, and childbirth. Over the time, she came to be associated with the following symbols: pomegranate, cuckoo, peacock/peafowl and a cow.

Although she is frequently portrayed as one with self-restraint and ascetic, she was cruelly vengeful when it came to Zeus’s numerous adulterous escapades. Unluckily for the targets of Zeus’s godly fondness, Hera had a habit of agonizing the “other women” and their children (counting Heracles, Apollo and Artemis) instead of Zeus. Juno was her Roman equivalent.

Athena, goddess of intellect, wisdom, and warfare. She is well known for being sprung wholly molded from the brow of Zeus. A key character in the Odyssey, she directs Odysseus. She instructed Heracles as well as Perseus through their tests. Her principal place of worship in Athens was the Parthenon, which is named as an honor to her. Minerva was her Roman equivalent. 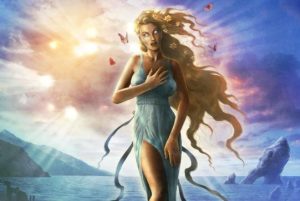 Aphrodite, the deity of affection, sex, and loveliness. Expectedly for a love deity, and it is believed that she came about as a result of the froth produced when her father, Uranus’ testis were severed and hurled into the sea by Cronus, Uranus’s son.

Her chief consort was Hephaestus. However, she often had romantic relationships with other Greek gods including, Ares, Poseidon, Hermes, and Dionysus. Her mortal lovers were Adonis and Anchises. Aphrodite’s most revered symbols were dolphin, rose, scallop shell, swan, dove, etc. Venus was her Roman equivalent. In the eyes of the ancient Egyptians, Aphrodite was seen as the equivalent of the goddess Hathor, the sky goddess of fertility and love. 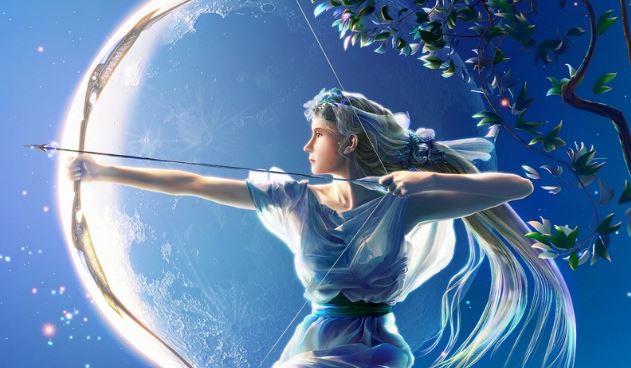 Artemis, the quick-footed deity of the hunt. Frequently portrayed on canvas and carving with a dog for hunting or cervid. She was together a huntress and a protector of the existing biosphere. Aretmis’ name in the Roman pantheon was Diana. 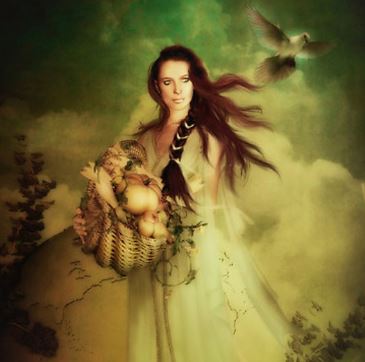 Demeter, an agrarian deity, was the mother of Persephone, who was kidnapped by the netherworld deity Hades to be his wife. While looking for her abducted daughter, she received the generosity of the regal family of Eleusis. The Eleusinian Mysteries, probably the most significant spiritual rites in ancient Greece, are credited to her lessons. In the Roman pantheon, Demeter was called Ceres.

Facts about the Olympian Deities

Hermes had a staff called the caduceus. It was usually portrayed with two serpents and two wings.

Hesiod records the trident of Poseidon was constructed by three Cyclops.

A 2001 research ascertained that the oracle, that was the spokesperson for Apollo, was possibly delirious owing to ethene gas arising from the rocks underneath the temple.