Stories in Greek mythology are known for taking readers on a journey through the realm of the gods in the sky on Mount Olympus, down to pitch dark region of the Underworld where sinister characters operate, and then across the vast depths of the ocean.

With regard to the realm of the Underworld (also known as Hades), where the souls of the dead journeyed to, there were a number of Greek gods and figures associated with the afterlife. There was the Olympian deity Hades and his wife Persephone. Contrary to popular opinion, Hades is NOT the god of death in Greek mythology. That title belongs to the primordial god Thanatos. Hades is the god of the dead. Hades only collected and ruled over the dead souls. He had nothing to do with ending the lives of people.

Therefore, who is Thanotos? And what are some of the major myths surrounding this Greek god’s origins, power and abilities?

In this article, worldhistoryedu.com delves right into origins, meaning, powers and symbols of Thanatos, the Greek god of death. It is not uncommon for many people to mistake Hades, the ruler of the Underworld, as the god of death in the Greek pantheon. Instead, the god of death in Greek mythology is the primordial god Thanatos. This god was seen by the ancient Greeks as the personification of death.

The primordial being who represents death

Thanatos, who is death personified, is a primordial deity, meaning he was one of the first deities that emerged at the beginning of the cosmos, that is, along with the likes of Gaia (earth), Tartarus (the abyss), and Nyx (night). The ancient Greeks saw the primordial deities in the pantheon as representations of concepts.

In the myths, Thanatos is seen as the son of the primordial deities Nyx, the goddess of night, and Erebus, the god of darkness. He is the brother of Hypnos, the primordial deity of sleep. Ancient Greek poet Hesiod states in the Theogony that Nyx and Erebus are the offspring of Chaos, a gaping void that preceded the creation of the cosmos.

Other siblings of Thanatos

In some accounts, Thanatos was said to be related to the three Greek Moirai. Also known as the Fates, the three Moirai were in charge of ensuring that every being, be it mortal or god, stuck to his/her destiny. As a result the three Morai were said to be even above and more powerful than the Greek gods.

Thanatos has also been associated with the Keres, a group of female death spirits. Unlike Thanatos who has a gentle and soft touch, the Keres were believed to deploy very violent techniques; hence their description as the personification of violent death. Often times, the Keres found themselves attracted to scenes of gory accidents and battlefields.

Role in the Greek pantheon

As the god of the death, Thanatos’ role involved going around the land of living and selecting the people whose time had expired. He would then gently carry the souls of the dead to the underworld. With the passage of time however, his role as the guide of the dead in the underworld came to be performed by the Olympian god Hermes. This has made some mythographers state that the Greek god Thanatos likely emerged from an aspect of Hermes.

In Hesiod’s Theogony, it is said that the sun never gazes upon Thanatos and his twin brother Hypnos. Hesiod adds that Thanatos roams the world peacefully looking for people whose time in the land of the living was up.

In performing his duties, he was unbiased. He could not be bargained with. Although he was soft and gentle in carrying out his duties, he was merciless when someone’s time was up. It was for this reason, he became hated by both gods and humans. Regardless, his role was an extremely crucial one as he served as an important figure in the transition from life to death, thereby keeping the cycle going. 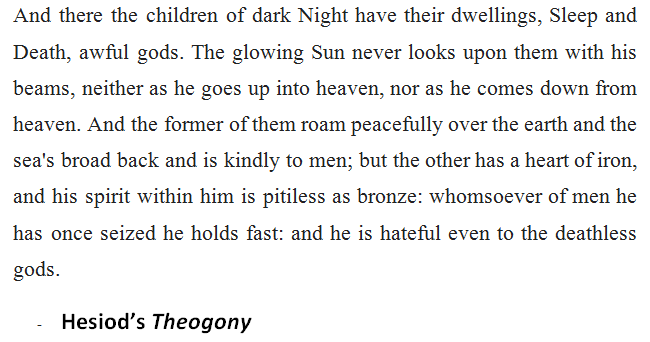 Over the millennia, there have been a number of ways Thanatos has been depicted. In some portrayals he is shown as beautiful young man with a very graceful demeanor.

In the Roman era, he was depicted as young boy with wings, almost similar to the depictions of the love deity Eros. There are also depictions of Thanatos as an infant sitting on the laps of his mother Nyx.

The ancient Greeks believed that the poppy flower was one of the symbols of Thanatos. Poppies are flowering plants within the subfamily Papaveroideae of the family Papaveraceae.

Depictions of a youthful Thanatos with a butterfly by ancient Greeks evoke a profound meaning. It shows the fleeting and transitory nature of life.

In addition to the butterfly, Thanatos has been associated with symbols such as a poppy flower, a sword, and an inverted torch. The inverted torch communicates the message of life coming to an end.

It was also not uncommon for artists to produce artworks showing Thanatos with his twin brother Hypnos. 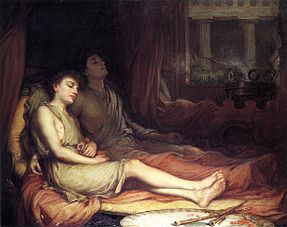 Due to his unbiased approach in carrying out his duties, Thanatos was hated by both gods and humans. The fact that he could not be bargained with made him a disliked figure in Greek mythology. However, Thanatos was by no means evil; his touch and the His touch was quick and soft, giving dead a painless death. He was also said to show a great deal of compassion to the people that he interacted with.

Significance in the Greek pantheon

The ancient Greeks believed that Thanatos was the personification of death. Often shown as a young, sinister figure, this Greek god was said to don a pitch black cloak and carry a sickle in his hand. In literature and art, he symbolizes the decaying or perishable. Along with Roman god Janus, the deity of doors and transition, Thanatos was one of the few ancient deities who best epitomized transition of life.

Thanatos may have been very merciless and impartial in carrying out his duties; however there were times where a few individuals managed to outsmart him and delay his coming for some period of time. The name that comes to the fore is King Sisyphus, ruler of Corinth.

It’s said that when Sisyphus’ time to die came, Zeus, king of the gods, ordered Thanatos to prepare a place in Tartarus where the mortal king would be chained up for the rest of eternity. Apparently Sisyphus had incurred the wrath of Zeus and some other Olympian gods, hence this special treatment.

Just as Thanatos was about to shackle King Sisyphus to his chains in the underworld, the shrewd king asked the god of death for one last favor. He asked if Thanatos could demonstrate how the chains would work. A trusting Thanatos obliged and shackled himself.  Sisyphus, having tricked death, left the scene and lived for a few additional period of time.

For cheating Thanatos (death) twice, Sisyphus was forced (by the gods) to roll a massive boulder endlessly up a steep hill in the Underworld | Image: Sisyphus (1548–49) by Venetian painter Titian, Prado Museum, Madrid, Spain

With Thanotos chained and unable to perform his duty, no mortal on earth died. Wars were fought and not a single human died. The absence of death infuriated Ares, the Greek god of war. A raging mad Ares journeyed down to the underworld and quickly released Thanatos from his shackles.

For tricking Thanatos (Death), Sisyphus was handed a terrible punishment in the Underworld. The gods made him roll an immense boulder up a hill only for it to roll down every time it came close to the top. Sisyphus was consigned to doing this over and over again for eternity.

Did you know: The word Sisyphean in English is used to describe a back-breaking and pointless activity?

One time the Greek hero and demigod Heracles came to the rescue of Princess Alkestis, the wife of his dear friend King Admetos of Pherai. Alkestis had offered her life to save her husband Admetos. Heracles happened to be in the palace of Admetos when Thanatos rightly came to claim the soul of Alkestis. Upon seeing Thanatos, Heracles jumped to action and famously wrestled and knocked down the god of death. By so doing, Heracles was able to prevent Thanatos from claiming the soul of his friend’s wife.

Thanatos during the Trojan War

Sarpedon was a Trojan warrior who fought gallantly during the Trojan War. As he was the son of Zeus, he was considered a demigod. As it was part of his destiny, Sarpedon was killed by Patroclus, the Greek warrior and childhood friend of Achilles. Following Sarpedon’s death, his body was taken by the Greeks, only for Zeus to summon Thanatos and Apollo to retrieve the body so that it could be taken to the land of Lycia. There Sarpedon was  given the proper hero’s burial.

Not wanting his dead son Sarpedon’s body to be dishonored on the battle field, Zeus ordered a number of Greek gods, including Thanatos, to retrieve Sarpedon’s body from the Greeks and give it a burial befitting of a hero. 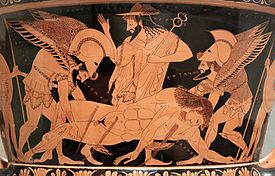 Hypnos (left) and Thanatos (right) transporting the deceased Trojan hero and demigod Sarpedon – son of Zeus – to his home in Lycia. Greek god Hermes can be seen in the background watching.

In almost every human society, there is a strong tendency to depict death or its concept as evil. Hence deities that are associated with death often get a bad rap, Thanatos being one of them. The Greek deity Hades, the lord of the Underworld, also suffered from this unfair stigma.

Compared to the selfish and evil actions taken by other Greek gods like Poseidon and Zeus, Thanatos and Hades can be seen as saints. There aren’t many stories in Greek mythology in which Hades or Thanotos acted in a malevolent manner, other than the fact that they were simply performing the role that was assigned them.

The ancient Greeks believed that Thanatos was the spirit of nonviolent death. Like his brother, Hypnos, the primordial deity of sleep, he has a very gentle touch.

So, perhaps the reason why he came to be demonized has to do with our natural inclination to be fearful of the inevitable, i.e. death. Like Hades, Thanatos is therefore one of the most misunderstood characters in ancient Greek religion and mythology.

It must be noted that comparing Thanatos to characters such as the Grim Reaper and the devil will be a huge insult to Thanatos. The Greek god of death, unlike those characters, did not take any form of pleasure in doing his work. Neither was he interested in giving the individual a very brutal death. The Greeks believed that Thanatos focuses on how best the soul can seamlessly transition from the land of the living to the land of the dead.

Thanatos was born from the union between Nyx (night) and Erebus (darkness). His siblings include his twin brother Hypnos (sleep), Eris (strife), and Nemesis (retribution) and among others. The boatman of the underworld, Charon, was also related to Thanatos.