As the ancient Greek god of forges and fire, Hephaestus is believed to have been the deity who forged the spectacular palaces, thrones, weapons,  and armor of Olympian gods and goddesses. He also famously forged the Greek hero Achilles’ armor during the siege of Troy in the Trojan War. Born crippled and hideous looking, Hephaestus is best known for the creation of Pandora, the first woman, who went on to unleash untold pain, illness, and misery on the race of men.

Learn 12 fascinating myths about the origin story, meaning and symbols of Hephaestus, the ancient Greek god of fire, volcanoes, blacksmiths, and craftsmen.

Hephaestus was a cripple and the god of fire, forges, sculpting and other metal crafts. Basically, he was the blacksmith of the Olympian gods and goddesses. He was an extremely hardworking and a powerfully built god. The source of his strength can be attributed to all the heavy lifting that he did in his workshop. He had his own workshop situated in a magnificent palace on Mount Olympus.

Children – Eucleia, Thalia, and Erichthonius (King of Athens who was half man and half serpent)

Epithets – “the Halting”, “Coppersmith”, “renowned artificer”, “Aetnaean”, “the lame one”

Hephaestus is one of the few Olympian gods that can claim to be the offspring of the mighty Zeus and Hera, both of who were king and queen of Mount Olympus.

However, some accounts state that he was only born to the goddess Hera. The Queen of Mt. Olympus was enraged after Zeus gave birth to Athena (goddess of wisdom) all by himself. The story goes on to say that Hera used a powerful potion to get herself pregnant. However, upon seeing the baby Hephaestus, Hera was so horrified by the baby’s deformed leg that she immediately cast Hephaestus out of Mount Olympus.

Some account of the myths state that the reason he was thrown out of Olympus was because he tried to mediate a fight between Zeus and Hera. Ultimately, Hephaestus fell on the island of Lemnos, where he honed his talents in the several crafts.

Regardless of the version of the story, the common denominator in Hephaestus’s birth has always centered on his disability and not-so-good looking features. 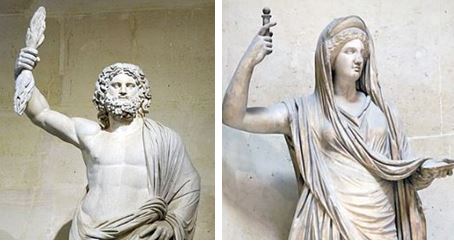 He was raised in secret by sea nymphs

As fate had it, and contrary to what Hera hoped for, Hephaestus went on to survive. He landed safely on earth after free falling from the sky for a couple of days. Taking pity on the poor baby, the nymphs (particularly Thetis, Achilles’ mother) at a nearby sea took Hephaestus in and cared for him.

According to the myths, Hephaestus is believed to have acquired his outstanding abilities in crafts and forging in the underwater cave that he was raised in.

Once the word got out that Hephaestus was alive, his father Zeus welcomed him back to Mount Olympus.

Hephaestus forged all the Olympian gods’ weapons and armor

In all of Greek mythology, no other deity or man can hold a candle to the skills Hephaestus possessed in craftsmanship. He was an absolutely skilled craftsman, creating amazing work of arts, furniture, and weapons on Mount Olympus. The tools (i.e. anvil, hammer, and tongs) he used felt like an extension of his body. His skill set ranged from metalwork, stone masonry, sculpting, carpentry, and many other crafts.

Hephaestus is credited to have created all the metal works, palaces and thrones on Mount Olympus. He was also the god who created the chariot that the god Helios, god of the sun, used in flying the sun across the earth, bringing in daylight.

And guess who forged Zeus’ thunder bolts and Poseidon’s trident? The credit goes to none other than Hephaestus. All in all, he forged the arrows of Apollo and Artemis; Harmonica’s necklace; Europa’s golden basket; the armor plates of Hercules and Achilles; Aphrodite’s girdle; Aegis breastplate, Agamemnon’s rod of office; Hermes’ helmet and winged sandals; Eros’ bow and arrows;  and Zeus’ impenetrable breastplate.

Owing to his natural ability to ability to control fire and metal, Hephaestus was able to bend any material to his will. It is also believed that he could imbue in the things that he made with motion ability. For example, he created two golden handmaidens to assist him in his workshop.

In some accounts, however, Hephaestus is believed to be the one who created the Cyclopes- the one-eyed giants/monsters. The Cyclopes frequently assisted him in his workshop. Their crowning achievement came when they made Zeus’ thunder bolts.

The Goddess Aphrodite was married off to Hephaestus

Aphrodite, the most beautiful and radiant of all the gods on Mt Olympus, constantly caused a number of gods to fight over her. Sensing that those fights could spiral into an all out war, Zeus married his daughter Aphrodite off to Hephaestus. Aside from the fact that the two deities were half-siblings, it was a vert strange pairing because no one expected Aphrodite to end up with a very hideous looking god in the shape of Hephaestus.

Another version of the story states that Aphrodite was given to Hephaestus in order to pacify the god of forges. Aggrieved perhaps by his mother’s disaffection for him, Hephaestus looked for a way to get back at her by gifting Hera a beautiful golden chair. Unbeknownst to Hera, the throne had a powerful mechanism that bound Hera in the seat. In order to set his wife free, Zeus arranged for Aphrodite to marry Hephaestus.

He created the Chains of Prometheus

The ancient Greek Titan Prometheus (creator of man) was once bound to a tree to spend the rest of eternity in torture. Zeus had grown tired of Prometheus’ trickery and shenanigans. Besides, the Titan Prometheus was the one who introduced mankind to fire. This act further infuriated Zeus. So the king of Mt. Olympus punished Prometheus by bounding him to a tree (in some account it was a mountain). The chain that he used to keep Prometheus bound was created by Hephaestus.

The chain was believed to be very strong. And had it not been for the sheer strength of the demigod Heracles (Hercules), Prometheus would have spent all of eternity bound to the mountain while his liver was feasted upon daily by Zeus’ eagle.

Desiring to inflict untold suffering on the race of men, Zeus commanded his son Hephaestus to create Pandora, the first woman. The King of Mount Olympus wanted to punish men (i.e. the creation of Prometheus) for receiving fire from the trickster god Prometheus.

Hence, on the command of Zeus, Hephaestus created Pandora, who was later given a jar (Pandora ’s Box) and sent to live with the race of men. Upon reaching earth, Pandora’s curiosity got the better of her, forcing her to open the box she had been given. And so the contents of the box, which contained unimaginable miseries and sufferings, were unleashed upon the earth (i.e. the race of men). It is believed that the only item that remained in Pandora’s Box was hope.

His wife Aphrodite was very unfaithful

Widely revered as the goddess of beauty, Aphrodite – Hephaestus’s wife – was a very unfaithful woman. She is believed to have had affairs with several gods and mortals. The most famous of her affair was with Ares, the Greek god of war and wanton violence.

The moment Hephaestus got wind of the affair, he devised a mechanical net and placed it on the bed. The goal was to use the net to trap Ares and Hephaestus while they were together. The magical net did its job and ensnared the adulterous gods. Quickly, Hephaestus dragged Ares and Aphrodite to the center of Mount Olympus, where he displayed them for the whole Olympian gods to shame. He released them after Aphrodite agreed to pay her bride price back to him.

Hephaestus facilitated the birth of Athena

The birth of Athena (the goddess of wisdom and strategic warfare) is quite a popular story in ancient Greek mythology. According to the myth, Athena – Zeus’ favorite daughter – was born a full grown woman with all her battle gear. She emerged out of Zeus’ forehead after Zeus had swallowed the goddess Metis (Athena’s mother) who was pregnant with Zeus’ child. Zeus feared that the offspring of Metis could one day unseat him from his throne on Mt. Olympus. Hence he swallowed Metis.

Shortly after swallowing Metis, Zeus had a very painful headache. In order to relieve his pain, he asked Hephaestus to use his mighty ax to crack open his skull. Athena then emerged out of Zeus head a fully grown woman in her battle attire.

Prometheus might have been a very troublesome and devious titan. However, he was altruistic in his actions. He went against the Olympian gods and stole fire from Hephaestus’ workshop for mankind. Aside from keeping themselves warm with the fire, the race of man was able to technologically advance its society.

Other interesting facts about Hephaestus