Learn about Helen of Troy

In many stories and legends from ancient Greece, Helen of Troy (also Helene) was seen as the most beautiful woman on earth. She was also the very character who indirectly caused the legendary conflict (the Trojan War) between the Greeks (early Greeks – the Achaeans) and the people of Troy (western Anatolia).

Most known for: her unrivalled beauty; triggering the Trojan War

Helen of Troy’s divine birth story and beauty earned her the respect and admiration of several gods and mortal kings. According to the myth, her father, Zeus ( the king of the gods ) turned into a swan to seduce Leda, Helen’s mother. Shortly after sleeping with Zeus, Leda also slept with her mortal husband, Tyndareus.

Leda went on to give birth to four children that were hatched from two separate eggs – one each for the two separate fathers. Two of the children – Helen and Polydeuces (Pollux) – were semi-mortals and believed to be the children of Zeus. The remaining two – the mortals Clytemnestra and Castor (the Dioscuri) – belonged to Tyndareus.

Right from an early age, the prophecies always stated that Helen of Troy was bound to be the most beautiful woman on earth. Suitors from all over the Mediterranean lined up in front of her house to seek her hand in marriage. It was even believed that the Greek heroes Theseus and Odysseus also sought to marry the young Helen.

Such was Theseus’ obsession with Helen that he kidnapped her and took her to the city of Athens. Helen was later rescued by her brothers, the Dioscuri.

Helen of Troy and Menelaus

Upon reaching the age of maturity, Helen chose to marry Menelaus – the Achaean wealthy prince and younger brother of Agamemnon. Menelaus was also the king of Sparta. Due to her sheer beauty and elegance, her marriage ceremony was attended by the Olympians, including the likes of Zeus, Athena, Poseidon, Aphrodite, and Hera.

At a ceremony that celebrated the marriage between the goddess Thetis (Achilles’ mother) and the mortal Peleus, the Greek goddess of discord Eris (most likely the daughter of Ares) gate-crashed the event.  Eris rebuked the planners of the wedding ceremony for failing to invite her, even though all the Greek gods were invited.

As a parting gift, Eris throws an apple into the hall and states that the apple is meant for the most beautiful god. Shortly after, the goddesses Athena, Hera and Aphrodite all begin to lay claim to the apple. Sensing that the dispute could cause havoc on Mt. Olympus, Zeus steps in and appoints the Trojan prince Paris to be the judge on the case.

The Judgement of Paris 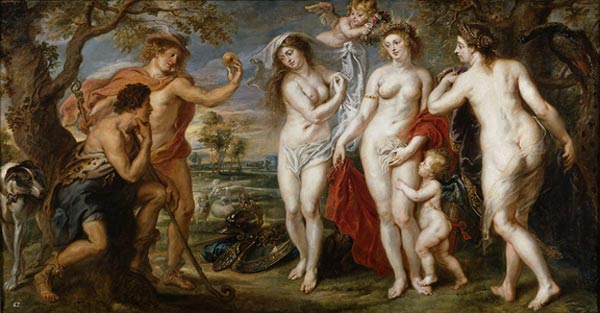 From left to right: the Trojan Prince Paris, Greek god Hermes, Athena, Aphrodite with her son Eros, and Hera | “The Judgment of Paris” | Image by Peter Paul Reubens (ca. 1638)

One by one, all the goddesses try to bribe Paris into ruling in their favor. Athena for example promises to make Paris the wisest and bravest battle commander, while Hera promises to bestow upon Paris vast amounts of royal power. Aphrodite, on the other hand, promises to give Paris Helen – the most beautiful woman on the planet. The young Trojan prince rules in favor of Aphrodite, declaring the goddess of love the most beautiful goddess on Mt. Olympus.

How Paris Abducted Helen of Troy 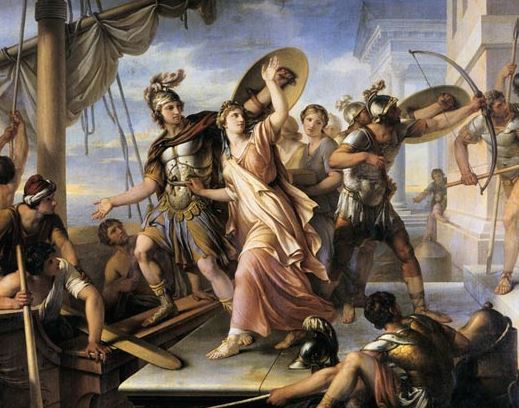 In a bid to get his prize, Paris sails to the palace of Menelaus. The Achaeans warmly receive Paris and throw a magnificent feast in honor of the prince. While Menelaus was away, Paris – the son of the King Priam of Troy – seduces Helen and convinces her to elope with him back to the city of Troy.

Extremely angered by her treachery, as well as that of the Trojans, the Achaeans ready all their forces and war against the city of Troy in a bid to get back their stolen princess.

Back in Troy, the common folks are incensed by Paris’ actions. They take out their anger on Helen, blaming her for the impending war against the Achaeans. In spite of the impending doom, the King of Troy, Priam, and his courtiers give Helen the best of treatments possible. They also convince her to reveal vital information about the military strategy of Achaian  commanders (such as Agamemnon, Ajax and Odysseus).

Helen of Troy | The city elders lamenting Helen’s role in triggering the Trojan War, a ten-year war between the Trojans and the Achaians

To settle the score, both nations agree that Paris and Menelaus must duel. However, the Greek goddess Aphrodite is believed to have swooped in the nick of time just as Menelaus was about to strike Paris. Helen gets enraged by Paris’ act of cowardice; she berates him and wishes he had died in battle.

Helen of Troy rebuking Paris for being a coward

In the course of the war, an arrow shot by Paris into the hills of Achilles kills the Greek hero. Shortly after, Paris himself loses his life in the war. It was revealed that Paris’ first wife, Oenone, could have saved him; however, she chose not to do so because she was still sour and heartbroken over Paris’ betrayal. Deeply saddened by the events of the war, Oenone kills herself later.

After failing so many attempts to break into the city of Troy, the Greeks devise an ingenious plan. They leave behind a gargantuan horse on the city’s shores and pretend to sail back to their country. Thinking the horse was an appeasing gift from the Greeks, the Trojans bring the horse inside the city. Unbeknownst to them, the Greeks had placed the best of their fighters inside the hollow horse. 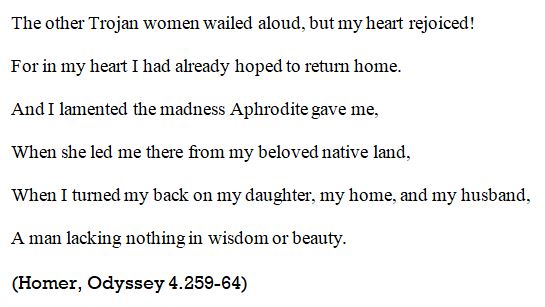 Helen of Troy | Helen rejoicing over the demise of Troy

Once inside the city, the Greeks in the horse wait patiently for the cover of the night before jumping out of the horse. The Greek soldiers went on to open the gates of Troy, allowing their comrades into the city. They then ransack and burn the city down to the ground. 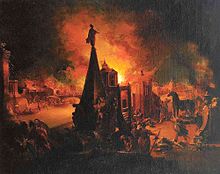 The Burning of Troy (1759/62), oil painting by Johann Georg Trautmann

In the ensuing chaos, Helen seeks the help of Menelaus and Odysseus in killing Deiphobus – the man she married shortly after the death of Paris. Deiphobus’ body is completely mutilated by the Greeks, with his arms, nose, and ears chopped off in the most gruesome of ways.

Before bringing the horse into the city, the Trojans tasked Helen to mimic the voices of the Greek soldiers’ wives as she walked around the horse. Realizing it was a trick, Odysseus ordered the men in the horse to remain silent. After vanquishing the Trojans, some of Trojans flee the city to set up settlements along the Mediterranean. The unlucky Trojans that remained in the city are taken as slaves, mostly surviving women and children as slaves.

A Trojan prince by the name of Aeneas – the son of Roman deity Venus – was among those who fled the burning city of Troy. Aeneas would later be credited with establishing the city of Alba Longa – the birthplace of Rome’s founders Romulus and Remus.

Although she was not entirely a goddess in the strictest sense of the word, Helen’s beauty was perhaps what made some ancient Greeks take to worshiping her. At Therapnae, there were even festivals and rituals in her honor. In the various temples of Rhodes also, Helen of Troy’s followers and worshipers saw her as Dendritis – the tree goddess. Some ancient Greek sailors even prayed to her in times of need.

The Death of Helen of Troy

In one of the stories, Helen was cast out by her stepsons after the death of Menelaus. The princess made her way to Rhodes, where she was killed by Polyxo, the Rhodian queen. Polyxo was avenging the death of her husband Tlepolemus in the Trojan War.

In Euripides’ version of the story, Helen is fated to die at the hands of Menelaus. However, Homer’s Odyssey begged to differ. According to the Odyssey, Menelaus and Helen of Troy went on to live happily ever after. Their daughter, Hermoine, later married Neoptolemus (the son of Achilles).

In a different ending to the story, Euripedes states that Helen was saved from the burning city of Troy by the Greek god Apollo, who later transports her to Mt. Olympus. Helen then spends all of eternity as a goddess with her brothers, the Dioscuri, on the mountain.