The Odyssey was a late 8th century BCE literary piece by Homer (a poet of ancient Greek era). The epic poem features the adventures of Odysseus of Ithaca who struggled to find his way back home after the Trojan War. For many centuries, the Odyssey has been rated as one of the best time-tested literature remnants from the Classical world.

Quick Facts about the Odyssey

Overview and Meaning of the Odyssey

About 10 years after Troy had fallen, and 20 years before Odysseus left Ithaca to join the Greeks to fight the Trojans, Penelope (Odysseus’ loyal wife) had faced marriage proposals from hundreds of suitors. They tried to convince Odysseus’ wife into marriage because they presumed her husband was dead.

Telemachus got encouragement from Athena (the Greek goddess who was supportive of Odysseus) and set out to hunt for his missing father. In his search, Telemachus paid visits to the homes of Odysseus’ former companions, namely; Helen, Menelaus, and Nestor.  These friends of Odysseus had returned to their various homes after the Trojan War. Since they partook in the war, Telemachus believed that they had clues concerning his father’s whereabouts.

Telemachus was briefed on how the war ended. He also heard stories about the hollow wooden horses (Trojan horses) that afforded the Greeks’ access to Troy. Menelaus then broke the hard news to Telemachus – rumors had it that Odysseus was held in captivity by Calypso (a female deity).

This cast the scene to Calypso’s Ogygia Island – the suspected location of where Odysseus is being held. It is believed that he spent about 7 years. Finally, the Greek gods Hermes & Zeus were able to persuade Calypso to set Odysseus free.

After his release, Odysseus’ boat was wrecked by the wicked sea god Poseidon. Odysseus then swam to rest on an island, where he was later discovered by a young Phaenician princess by name Nausicaa. Odysseus was warmly received by King Alcinous and his queen Arete; he proceeded to tell them the details of the difficulties he faced at sea during his return journey. Heavy storms had thrown all his 12 ships out of course.

He also recounted how he visited lotus-eaters before finding himself under the captivity of Polyphemus (Poseidon’s one-eyed son), and later escaped by blinding him. The Phaenician King promised to assist Odysseus to find his way back home to Ithaca. In exchange for his help, the King demanded that he tells them every little detail of his adventures. Odysseus spent the entire night telling them stories about; his temptations, love affairs with Circe (a goddess),  voyage to Hades to meet with Tiresias, battle with Scylla (a sea monster), and other adventurous tales.

After his powerful narrations, the Phaenicians were awestruck by Odysseus’ adventures. They fulfilled their promise and helped him to travel back to his home town of Ithaca. On arrival at Ithaca, Odysseus looked for the hut of Eumaeus (his loyal herdsman). Before that, Athena had disguised the lost hero (Odysseus) as a mere homeless beggar.

In any case, Eumaeus warmly entertained the beggar. It was all joy when the disguised Odysseus bumped into his son Telemachus; he secretly disclosed his real identity to his son. When Odysseus was stranded at seas for a decade, the Ithaca people declared him dead and took over the kingship. They even laid ambush to kill his son Telemachus and also tried to take over Odysseus’ wife.

The return of the real King and hero meant that power struggle and commotion were likely to ensue. Moreover, Odysseus had to be careful not to get identified by his fake friends and enemies. So the father and son hatched plans to murder the suitors, in order to regain their royal powers.

Visit to the Palace – the Archery Contest

Odysseus visited the palace the following day (still disguising himself as a stranger). There, the suitors treated him with disrespect by raining insults on him.  It was only Eurycleia (Odysseus’ former nurse) that quickly identified the returned hero, but then, she kept it to herself.  All that while, Odysseus’ wife (Penelope) raised suspicions about the stranger’s resemblance to her missing husband. She developed some interest in him.

Being a wise lady, she decided to organize a bow and arrow contest and challenged her suitors to use Odysseus’ popular bow to fire through an array of 12 axes. This was a difficult mission that no one had ever accomplished, except the mighty Odysseus. When it reached the stranger (Odysseus’) turn, his shot went through the array of axes. The rest of the suitors had failed the test. 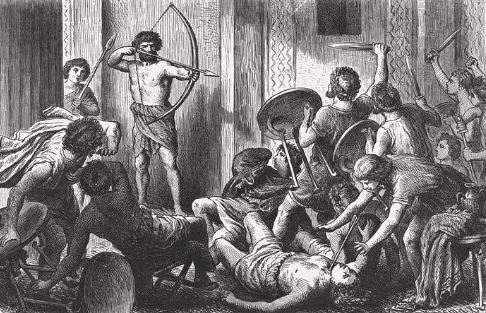 Now with a weapon in his hands and his enemies before him, Odysseus fired the arrows into his enemies. With assistance from his son, they killed all the suitors. Odysseus then revealed his true identity to his townspeople and reunited with his beautiful and faithful wife, and paid a visit to his father Laertes.

The relatives of the slain suitors tried to avenge the bloody deaths of their family members by attacking Odysseus. Laertes came to the defense of his son and killed Antinous’ father. This ended the attacks. The king of Mount Olympus, Zeus,  intervened by dispatching Athena to bring peace and harmony to Ithaca. Odysseus re-established his authority over Ithaca; this ended his ordeals.

The term “Odyssey” has become an alternative word for long adventurous journeys (voyage).  When talking about the greatest stories, Odyssey always makes the list. Ever since the Renaissance flame sparked, the poem has had a huge impact on European literature.