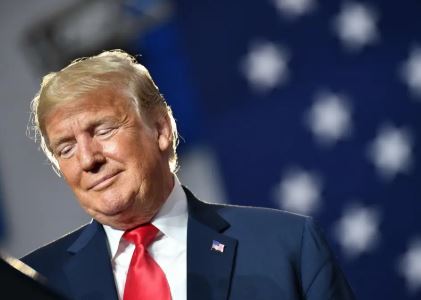 Donald Trump, the 45th President of the United States of America

With no prior government or military experience, Donald J. Trump stunned the world and critics when he defeated former US Secretary of State Hilary Clinton in the 2016 US presidential election.

In the four years that he stayed in power, the Trump administration typically pursued trade protectionism, a plethora of deregulation exercises, and individual and corporate tax reforms. These policies in so many ways caused the federal budget deficit to balloon. For those on the left and critics of the president, Trump’s political and economic initiatives (i.e. America First) were too anti-global in nature. However, the upside of those policies (conservative legislation and ideals) resulted in remarkable economic growth and close to full employment in the U.S.

Worldhistoyedu takes a look at the 10 most significant achievements of Donald Trump, the 45th president of the United States.

In December 2017, President Trump passed the Tax Cuts and Jobs Act. Owing to the act, the United States is expected to cut about 1.5 trillion in taxes over the next 10 years. That is about 150 billion every year – the fourth largest since 1940. As a percentage of GDP, those tax cuts come in seventh in U.S. history.

However, those tax cuts contributed to worsening U.S. budget deficit. For example, the US had a budget deficit of $779 billion and $984 billion in 2018 and 2019 respectively. The deficit from 2019 translates into about 4.6% of the 2019 GDP of the United States. Regardless of those deficit issues, the U.S. continue accrue immense economic advantages from those tax cuts. Most notable of those benefits came in the form of jobs. Interestingly, the stock markets have responded very positively. Since Trump came into office, the U.S. stock market (S&P 500) has witnessed about 45% growth.

Largely buoyed on by the economic stimulus package from the Obama era in 2009, the Trump’s administration has supervised successive years of stellar job growth figures. Critics of the president say that these figures have come on the backdrop of Trump’s excessive economic nationalism and anti-globalization policies.

Regardless of what side of the political aisle one is, it is an undeniable fact that the Trump presidency witnessed growth in wages for several months in a roll. Likewise, the median household income steadily increased.

In 2019, unemployment in the US stood at a 49-year low. Similarly, there were very remarkable reductions in unemployment rates among women, the youth, veterans, high school diploma holders, African-Americans, Hispanic-Americans and Asian-Americans. Since the beginning of Trump’s presidency, about 6.7 million jobs have been created in the nonfarm sectors.

Visit this link to read up-to-date data (from the U.S. Bureau of Labor Statistics) about the employment situation in the United States. 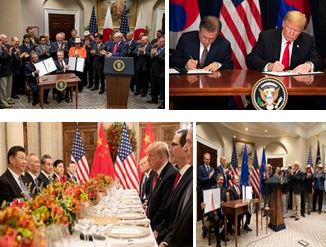 Upon entering office, Donald Trump immediately set course to scrap off all deals that he considered exploitative and damaging to America’s economy. His administration has consistently steered away from multilateral trade agreements; instead, Trump has favored dealing one-on-one with countries. He believes that multilateral trade deals create a situation where parties in the deal can go rogue and thereby exploiting the other party. It is for this reason why he renegotiated several trade deals with both allies and foes of America.

Many of those renegotiation allowed benefits to trickle down to the average American workers. For example, Trump pulled the US out of 1994 NAFTA (the North American Free Trade Agreement) – a trade and economic corporation deal that eliminated trade barriers among the signers for 15 years. Trump pulled out of NAFTA because he reasoned that it subjected the US to a foreign trade tribunal. In place of NAFTA, Trump secured the U.S-Mexico-Canada Agreement (USMCA), which was given consent by the U.S. House in December 2019.

Trump also exited TPP (Trans-Pacific Partnership), which was signed by 11 countries. He signed the Buy-American, hire-American executive order on April 18, 2017. The order restricted the H-1B visa by giving preference to American workers. It also promoted the use of American-made goods in federal projects.

Click on this link to read a succinct guide to the NAFTA deal.

President Trump opened several avenues for American goods and services to be exported abroad. He famously secured a deal with Beijing for American beef and rice to be exported to China.  Likewise, several European markets opened their doors for American products and services. In Ukraine for example, the Trump Administration was able to secure a deal that allowed America to export coal to the country. This was very crucial because it reduced Kiev’s over reliance on energy from Russia.

In dealing with China, Trump halted China from illegally dumping aluminum foil into the US. The China-US trade war that stemmed from what Donald Trump called decades of economic exploitation and abuse from China. Trump forced Beijing to come to the negotiation table by expertly imposing a series of economic tariffs on China.

During his presidency, Trump nipped in the bud Beijing’s alleged crimes in currency manipulations (a technique which makes its exports relatively cheap), intellectual property theft and piracy. In the nutshell, he has promoted equitable and fair trade deals with a host of countries like South Korea, Japan, and other Middle East countries.

Between 2017 and 2019, Trump appointed about 50 federal appeals court judges. He also got two of his nominations for the Supreme Court confirmed. The first was Neil Gorsuch in 2017 and the second was Brett Kavanaugh in 2018. Gorsuch’s confirmation by the Senate came in Trump’s first 100 days in office.

The president was criticized for appointing mainly conservative jurists, that is, judges that are more inclined to tow an originalist interpretation of the Constitution. Regardless, it is still quite an impressive feat to get 50 federal appeals court judges confirmed in a single term.

At the start of his presidency, Trump joined forces with allies in the Middle East region to eliminate the threat of ISIS. The territories that the radical Islamic Caliphate used to occupy significantly shrunk due to bold efforts taken by the Trump administration. By so doing, the U.S. and its allies were able to end years of bloodshed and human rights abuses that were carried out by the caliphate in Syria and surrounding countries.

To cap it all off, Trump gave the directive for a surgical strike to be carried out against Abu Bakr al-Baghadi – leader of ISIS. Al-Baghadi and a number of his lieutenants were neutralized in October 2019. Ever since, the threat that ISIS pose to the region, and for that matter to the US, has significantly reduced.

In 2019, Trump did however come on the receiving end of a barrage of criticisms after he pulled out American troops from the area, leaving the Syrian Kurds to fend for themselves. Those Kurds were the very people that supported America’s coalition forces in immobilizing and dismantling ISIS. To many people around the world, this felt like a stab in the backs of the Kurds. Trump retorted by saying that the stability and safety of the region should be met by regional powers. His America First Policies are interested in very minimal political and military intervention beyond the shores of America. Rather than acting as the world’s police force, Trump believes that those resources would be better spent in improving the lives of the average Americans.

Another remarkable achievement of Donald Trump was that he accelerated the swift implementation of programs that cemented America’s dominance in the coal, oil and natural gas markets.

It may have come at the expense of the world’s climate, but those production figures have helped boost manufacturing industry in America.

The U.S. maintained its top spot as the world’s largest producer of crude oil. It surpassed* Russia and Saudi Arabia. By so doing, Trump’s initiatives, as controversial as they are, have helped guarantee America’s energy for the foreseeable future. His admirers tout those energy policies as crucial in securing America’s prosperity and security.

Increased spending in the military

In 2017, Trump’s spending in the military increased by $21 billion. He focused on U.S. national security in the cyber and tech world. Trump rolled out a new national cyber strategy. He also increased transparency and accountability at the Department of Defense. Under Trump’s administration, the first-ever department-wide audit of the Pentagon was conducted. The audit was backed by an executive order signed by Trump on March 13, 2017. The goal was to bring waste to the barest minimum and to improve the DOD’s services.

In addition to the overall increased spending in the military, Trump made sure that troop salaries were well provided for. Military pay increased by 3.1%. He also bolstered America’s defense systems. As a result, US troops and equipment are better poised to deploy quicker or to face off America’s enemy in a swift and effective manner.

Additionally, Trump called on NATO allies to put their monies where their mouths are and pay their fair share for their collective defense against threats that may stem from the likes of Russia. The allies responded by spending more on its collective defense – $69 billion dollars more.

The US Space force

On December 20th, 2019, the US Space Force came to being. It was incorporated as the sixth arm of the United States Armed Forces. It supersedes the Air Force’s Space Program Command (AFSPC).

It may sound futuristic; however, the initiative is a very bold and laudable idea. It is inevitable that humanity in the near future will begin to soar into space and colonize near-by worlds in our solar system. It is for this reason why Trump decided to set up a body that could effectively keep things orderly and civilized in space. It is absolutely crucial that America has the appropriate security measure to thwart efforts from persons or countries that would like to harm America’s interests in space.

Donald Trump Accomplishments in terms of executive orders and legislation 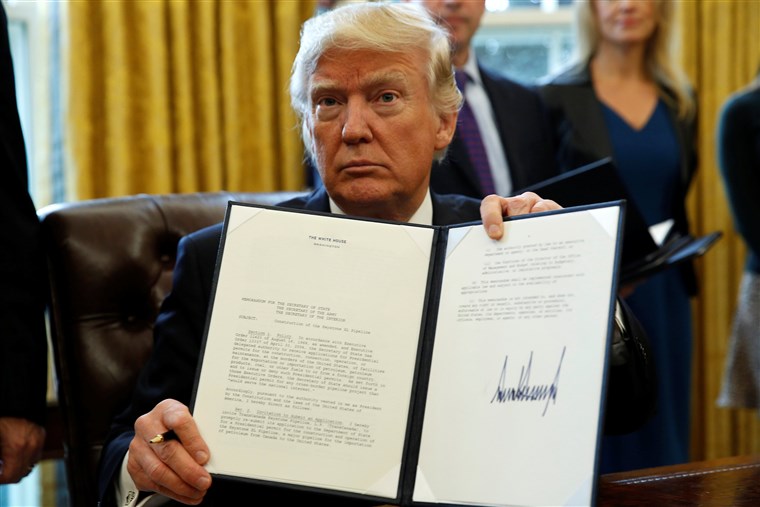 In the first few months of Trump’s presidency, the administration worked tirelessly to undo the previous administration’s legacy. For conservative Americans, this came as good news, watching the president introduce a plethora of conservative legislation. Since Harry Truman, no other U.S. president has signed more legislation and executive orders than Donald Trump.

Let’s take a look at his notable lists of legislative accomplishments during his stay at the White House.

On June 2, 2017, Donald Trump signed bills that assisted law enforcement and veterans. Some of those bills allowed for quicker processing of benefits to families of fallen police officers.

On December 22, 2017, Trump signed the ObamaCare Individual mandate. Trump’s goal was to make the healthcare market freer. However, on December 20, 2019, he came under sharp criticism for repealing three ObamaCare taxes.

Trump signed the Right-To-Try legislation in 2017. The legislation allowed for patients to explore experimental treatments that have not necessarily been approved by the U.S. Food and Drug Administration.

The First Step Act signed by Trump on December 21, 2018 was aimed at reducing the mandatory minimum sentences given to people for certain crimes.

In the month of February, 2017, Donald Trump signed H.J. Res. 41 and H.J.Res. 38. Those laws removed a host of regulations in the oil, gas, and mining industries enacted by the previous administration.

Nicknames: Mr Trump; Your Favorite President; The Chosen One