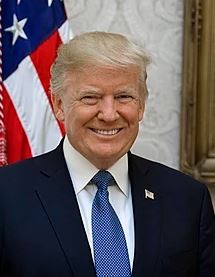 New York business magnate and 45th president of the United States, Donald J. Trump, loves to brag about his quality of education. But the fact of the matter is that his educational journey is surprisingly a shorter one; Trump’s highest qualification is a bachelor’s degree in economics, with finance being his main area of specialization. Let’s take a look at Trump’s educational background.

Trump grew up in Jamaica Estates in Queens, New York. His early childhood was characterized by a bit of uncouth behavior, which got his rich father Fred Trump deeply worried about his boy’s future. Being a smart businessman, Fred Trump took corrective measures and addressed little Donald’s waywardness.

Before he attained the age of 13, Trump schooled at the Kew-Forest School — it’s an old preparatory school in Forest Hill, Queens. The school offers coeducational preschool tuition for students through 12th Grade. Trump started showing his bad colors right at this preparatory school. To stop him from causing further troubles, his dad took him to New York Military Academy so that he could be disciplined over there.

Trump excelled greatly at the military academy. His social and academic life transformed in a positive direction. He was also a great sportsman. Trump was a star soccer player, an athlete, and a member of the academy’s baseball team.

Tapping into his leadership skills, Trump was appointed a cadet captain. In 1964, his graduation year, he led his cadet members to 5th Avenue during a parade on Memorial Day.

Notwithstanding the fact that he was seen as a bully and a Ladies Man, Trump believes that his formative years were those he spent at the New York Military Academy. However, Trump went on to become a businessman, instead of serving in the Vietnam War as an American troop. The president acknowledges that he felt guilty of not going to Vietnam. But truth be spoken, a medical deferment disqualified him from military deployment.

It’s hard to dig into the details of Trump’s academic performance at the academy. After boasting of his intelligence, Trump had his lawyers and legal team bar his former schools from releasing his academic results. He entered Fordham University for a while.

After graduating from military academy, Trump enrolled at Fordham University for 2 years (1964-1966) before leaving on a transfer to the University of Pennsylvania. Trump claims that he transferred to Pennsylvania because he wanted a new challenge with the best. There are also unsubstantiated allegations that the future president of the U.S. left Fordham because of bad grades.

In 1966, Donald J. Trump entered University of Pennsylvania to read Economics as an undergraduate student. His interest in real estate may have convinced him to read economics in order to widen his financial literacy. When his elder brother Robert struggled to live a responsible life, Trump stepped in to inherit and manage his family‘s real estate businesses.

In 1968, he graduated with a bachelor’s degree in economics. Claiming that he topped his graduating class, Trump has blocked all access to his academic results. Meanwhile, he constantly questioned president Obama’s educational background.