Timeline of Rutherford B. Hayes’s Life 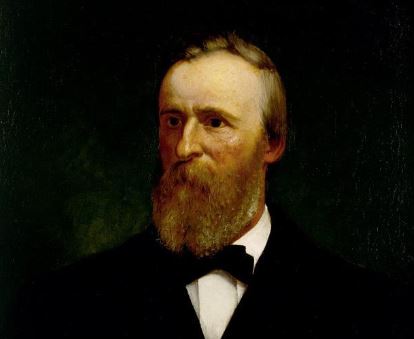 Rutherford B. Hayes, supported by his financial conservative approach to governance, was US president during a period of great change – the end of Reconstruction Era (1865 – 1877).  President Hayes worked extremely hard to ensure that his administration was guided by the principles of merit and equal treatment. Also, he was a very decisive leader – a trait which was evident in July 1877, when he deployed federal troops to quell riots that spilled over from the Great Railroad Strike of 1877.

Extracted from a host of materials, this timeline shines light on the key moments in the life of Rutherford B. Hayes, the 19th US President:

1836: Enrolled at Norwalk Academy in Ohio. The school, which was headed by Jonah Chaplin, was a Methodist school.

1842: Studied law under the tutelage of Thomas Sparrow.

August 27, 1845: Graduated with a Bachelor of Laws from Harvard University.

1847: Came down with what was most likely tuberculosis, according to his doctor.

December 30, 1852: Hayes got married to Lucy Ware Webb. The ceremony took place at his mother-in-law’s residence.

December 26, 1853: Hayes entered into a partnership with Richard M. Corwine and William K. Rogers in Cincinnati. The name of the law firm was Corwin, Hayes and Rogers

1856: Served as a delegate to the state Republican Convention in Columbus. Hayes supported John C. Fremont for presidency.

April 15, 1861: The American Civil War breaks out and Hayes, almost 40, joins the volunteers to fight for the Union.

June 27, 1861: Appointed Major in the 23rd Ohio Volunteer Infantry. He had no prior military experience.

1861 – 1865: Fought bravely in a number of Civil War battles such as the Battle of Opequon Creek and the Battle of South Mountain in Maryland (during Antietam Campaign in 1864). Hayes was promoted to field commander and later Brevet Major General of Volunteers.

September 29, 1864: A fifth child of Hayes is born. The child is called George Crook Hayes. He was named after Hayes’ Civil War commander – George Crook.

October 17, 1864: Elected to the U.S.House of Representatives to represent Ohio’s Second District.

June 8, 1865: Hayes draws his army service to an end and resigns from the army.

December 4, 1865: Rutherford B. Hayes gets sworn into the 39th Congress as Ohio’s Second District representative.

October 1866: Wins at the polls and gets re-elected to Congress.

June 19, 1867: The Republican Party nominates Hayes for governor of Ohio.

January 13, 1868: Inauguration ceremony is held and Hayes is sworn in as the 29th Governor of Ohio.

October 12, 1869: Wins a re-election as governor. He defeated Congressman George H. Pendleton (Democrat). His campaign had themes such as equal rights for minorities, especially black Ohioans.

January 10. 1870: Sworn into office as the governor of Ohio for the second time. With Republican majority in the legislature, Hayes helped ratify the 15th Amendment to the United States Constitution.

June 1872: Serves as a member of the platform committee during the Republican National Convention in Philadelphia, Pennsylvania

August 6, 1872: His party nominates him to represent Ohio’s Second District at Congress.

October 1872: Fails in his bid to become a Congressman, losing to Henry B. Banning by 1500 votes.

March 1873: Turns down the position of Assistant US Treasurer at Cincinnati. The offer of appointment came from President Ulysses S. Grant.

May 3, 1873: Retires from politics and moved to Spiegel Grove, Fremont.

January 21, 1874: Hayes inherits a sizable amount of fortune from his uncle Sardis Birchard.

June 2, 1875: Nominated to run for governor of Ohio for the Republican Party.

January 10, 1876: Hayes is sworn in as governor of Ohio for the third time. An unprecedented feat of accomplishment.

June 14-16, 1876: Nominated for president at the Republican National Convention. His win came on the seventh ballot. William Almon Wheeler was voted as his running mate.

March 2, 1877: Congress declares Hayes the winner of the election. As part of the concessions (i.e. the “Compromise of 1877” or “The Great Betrayal”), Republicans agree to bring an end to the Reconstruction Era by removing federal troops from the South.

March 2, 1877: Hayes resigns from his position as governor of Ohio.

March 3, 1877: Rutherford B. Hayes gets sworn in as the 19th US president. The oath of office was privately administered by Chief Justice Morrison R. Waite.

March 5, 1877: At a ceremony in the capital, Hayes is publicly sworn in as the nineteenth president of our nation.

March 15, 1877: President Rutherford B. Hayes taps Frederick Douglass as the US Marshal of the District of Columbia.

April 24, 1877: President Hayes removes military from Louisiana and South Carolina. This marks the end of Reconstruction.

July 1877: Great Railway Strike erupts in Maryland before spreading to other states. President Hayes responds by using federal troops to quell the riots before protesters could damage or cripple the US postal service infrastructure .

February 28, 1878: He vetoes the Bland-Allison Act. Congress went ahead and passed it anyways.

July 11, 1878: Hayes removes Chester A. Arthur (later 21st president of the United States) and Alonzo B. Cornell from the New York Customs House. This was part of Hayes’ effort to eliminate the enormous influence New York Senator Roscoe Conkling had on Capitol Hill.

November 17, 1880: President Hayes signs a treaty with China. The treaty allows the U.S. to regulate immigration from China.

January 26, 1881: Stanley Matthews of Ohio gets appointed to the Supreme Court by Hayes.

March 4, 1881: Curtains close in on President Hayes’ term of office. He leaves the White House to retire at his home in Fremont, Ohio. His successor, Republican James A. Garfield, won the 1880 presidential election by defeating Democrat Winfield S. Hancock.

1881: Rutherford Hayes gets appointed as a trustee of the Western Reserve University.

September 7, 1883: The former commander-in-chief of our nation becomes the President of the National Prison Association.

October 17, 1888: Appointed commander of the National Commandery of the Military Order of the Loyal Legion.

April – May, 1890: Hayes embarks on a tour of Bermuda with his daughter Fanny.