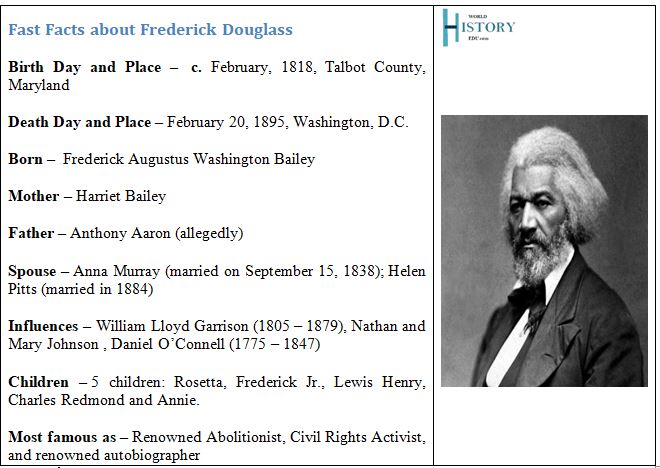 Facts and achievements of Frederick Douglass

Frederick Douglass was a famous 19th century African-American noted for his escape from the jaws of slavery and then going on to become a leading abolitionist and civil rights activist. He is also most remembered for penning down five critically acclaimed autobiographies, which helped bring to an end the practice of slavery.

In order to fully comprehend his life, the article below contains the 9 major achievements of Frederick Douglass, the man whose work inspired the civil rights movement in the 1960s.

He made a daring escape from slavery to freedom 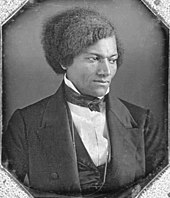 Frederick Douglass in his early 20s

Did you know that Douglass failed on two occasions as he tried to escape from his slave masters? It was only on the third attempt (in 1838) that he was successful. He was assisted by Anna Murray, a free woman and later his future wife. It was Murray’s money that Douglass used to take a train to Havre de Grace, Maryland.

Disguised as a sailor, and with the help of some identification documents given to him by a free African American, Douglass was able to flee from slave owner Edward Covey to the residence of David Ruggles, a famous abolitionist from New York. Shortly after he was safe and sound, he changed his surname from Bailey to Douglass.

Kind courtesy to his slave master’s wife, Sophia, Douglass was able to learn the English alphabet starting around the age of 12. But his tutoring days were short lived after Sophia’s husband, Hugh Auld, asked Sophia to desist from educating Douglass. From there onward, Douglass took to self-educating himself. It has been stated that he read whatever material his hands could get hold of. He would go on to become a respected orator, writer and teacher.

Due to his deep insight into what it was like to be a slave, Douglass was urged by William Lloyd Garrison, the founder of The Liberator, to write an autobiography. Garrison and Douglass hoped to shed enormous light on the plight of slaves in America.  And so Douglass authored his first autobiography – Narrative of the Life of Frederick Douglass, an American Slave. The book was published in 1845 and went on to received wide acclaim. It provided in-depth details about his life as slave and the challenges he faced even after becoming a free. This bestseller, which sold about 5,000 copies in just under 5 months, was followed by My Bondage and My Freedom (1855) and Life and Times of Frederick Douglas (1881).

Across the U.S., Douglass’ autobiographies were big hits as well. Some of them were even translated into major European languages. Those autobiographies were crucial in the struggle to end slavery in the United States and beyond. They inspired a whole lot of African Americans to join the abolitionist course and movement.

Douglass believed that civil rights and voting rights were inalienable to every American regardless of race or gender. Hence, his activism also included women’s suffrage.

For his efforts, the women’s rights movement invited Douglass to a number of their events. At the Seneca Falls Convention (the first women’s rights convention in the U.S.) in New York in July 1848, Douglass was the only African-American at the event. Extensive discussions and debates were made about whether women should be allowed to vote or not. Douglass stood up and gave an eloquent speech about why women should have voting rights. He was able to convince the delegates to pass a resolution. From there onward, he became a real force be reckoned with in the fight to create a just and fair society for all Americans. 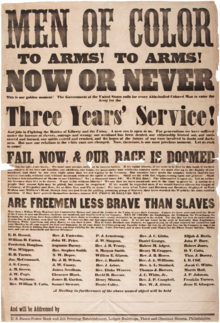 Frederick Douglas frequently had very productive talks with Civil War President Abraham Lincoln. Owing to the two men’s efforts, African-Americans rallied, in their millions, in support of the Union’s course. President Lincoln welcomed Douglass’ input about how African American soldiers ought to be treated in the Union forces.

Douglass and his fellow abolitionist were full of heartfelt praise for President Lincoln after the Emancipation Proclamation came into effect on January 1, 1863. The proclamation freed all slaves in the Confederacy. Owing to the proclamation, tens of thousands of African Americans joined forces with the Union to defeat the South.

Supported the ratification of the Civil Rights Amendments

Regarded as the most influential African-American abolitionist, Frederick Douglas was an outspoken supporter of the Thirteenth Amendment – a constitutional amendment that outlawed slavery across the United States. After years of fighting and activism, Douglass remained very optimistic that the battle was close to completion, African Americans were finally getting a modicum of human rights and protection under the law.

He was a staunch advocate of voting rights for African Americans

All throughout the duration of the American Civil War (1861 – 1865), Frederick Douglass communicated with President Abraham Lincoln. He even encouraged African Americans to serve in the Union army. Douglass was however a bit disappointed that the 13th Amendment, which abolished slavery, did not incorporate voting rights for African Americans. Owing to this, Douglass and President Lincoln’s relationship soured for a brief period of time.

The 14th and 15th Amendments (i.e. the Civil War Amendments) to the U.S. Constitution came as huge relief to Douglass. Those Amendments were big boost to alleviating the deplorable situation African Americans found themselves living in. Additionally, Douglass’ brilliantly written autobiographies helped whip up civil rights sentiments all across the South. Douglas’ civil rights activism was in part aided by then U.S. president Ulysses S. Grant (1822 – 1885). Joining forces with Grant, Douglass worked tirelessly to bring an end to brutalities perpetrated by the Ku Klux Klan (KKK) in the South.

Shortly after he had self-taught himself to read and write, Douglass embarked on a life journey to teach enslaved African Americans. After church service, it was not uncommon to find him teaching the slaves how to read the New Testament. His weekly lessons attracted more than three dozen slaves. Such was his impact that, the slave owners became suspicious and weary of Douglass’ lessons.

As a freeman (with his wife and children), Frederick Douglass renewed his passion for teaching living in New Bedford, Massachusetts. He frequently gave lectures about his life as slave in Baltimore. Many of his anti-slavery lectures received quite a large audience. He even won the admiration of William Lloyd Garrison, the founder of The Liberator, a weekly journal that promoted the abolitionists’ course.

Douglass’ reputation and fame as a formidable orator won him an invitation to Massachusetts, where he gave a rousing speech at the annual convention of Massachusetts Anti-Slavery Society in Nantucket.

His abolitionist struggle took him oversees

Not wanting to return to his old life of bondage and slavery, Douglas fled the United States, making his way across the Atlantic and into England. Shortly after arriving in 1845, he moved to Ireland, staying there for about two years.

While in the United Kingdom, Douglass continued to give speeches and talk about his anti-slavery ideas. He also spent considerable amount of time with famous Irish nationalist Daniel O’Connell.

Although he roamed the streets of the United Kingdom as a free man, Douglass was still a slave under the laws of the U.S. His freedom came after his supporters in the UK raised money to buy his freedom. Shortly after, Douglass, now a freeman, returned to the U.S. in 1847 to fight even fiercer for the freedom of enslaved African Americans.

Established on December 3, 1847, The North Star newspaper was intended to spread anti-slavery sentiment all across America. The newspaper was quite effective at doing what it set out to do. As a result, the newspaper became very popular in the north of the country, a place where Republicans and abolitionist dominated the political landscape.

Using its weekly publications, The North Star consistently shone light on the inhumane and barbaric conditions slaves had to endure at plantations across the nations. Douglas and his team of writers at the newspaper could boast of reaching about 4,000 weekly readers.  Some of Fredrick Douglas’ readers were even in places across the Atlantic, in Europe, and the Caribbean.

A few years after it was founded, the North Star formed a very close alliance with the Liberty Party Paper, an abolitionist newspaper which was founded by Gerrit Smith. The merger would last until 1860. 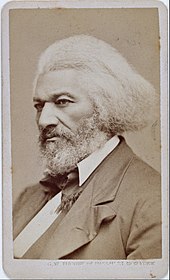 Here are a few other worth-mentioning accomplishments of Frederick Douglass: