Why and How the American Civil War Occurred 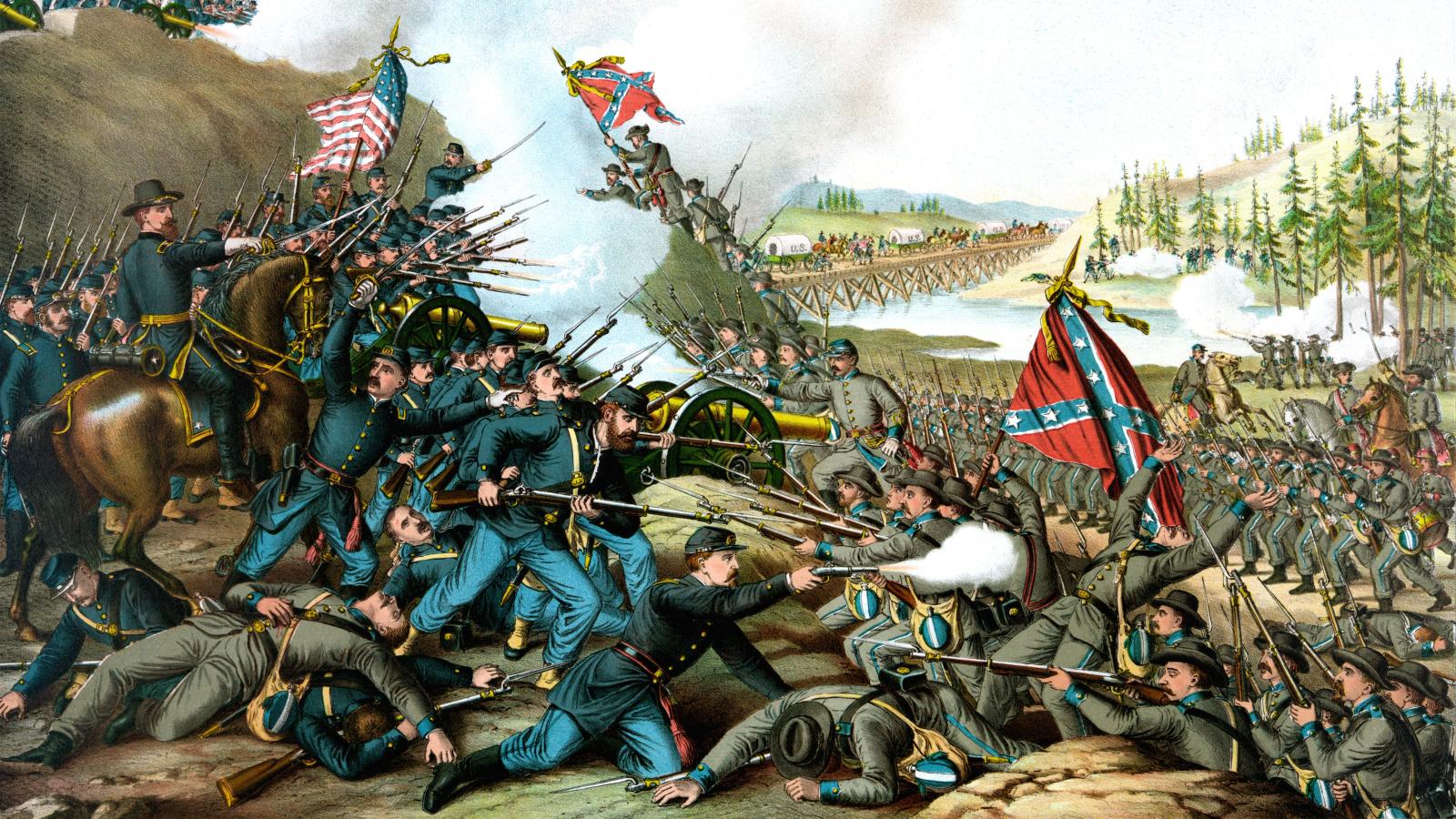 The American Civil War was one of the deadliest and costliest wars ever fought on mainland U.S. It was an interstate conflict between the southern Confederate States and the northern Union States. The war lasted from 1861-1865. Disagreements about enslavement of blacks, States’ rights and westward expansion had internally divided America for decades. The Northern States believed in interpreting the U.S. Constitution from moral and ethical stand point. Hence, the loyalists in the Union desired one thing only- the abolition of slavery, or at least preventing it from creeping into the North. They believed that this was in the spirit of the the 1776 Declaration of Independence – all men are simply born equal.

On the other hand, the Confederate States held opposing views, steep deep in the legalism of the U.S. Constitution. Basing their argument on the rule of popular sovereignty, they believed that states had the right to determine whether or not to have slaves.

Learn about the First Amendment to the U.S. Constitution

Decades of this critical division between the North and South grew into epic proportions after Abraham Lincoln (a Union loyalist and anti-slavery advocate) was elected president on November 8, 1860. Tensions heightened and  broke into an all-out civil war the following year. 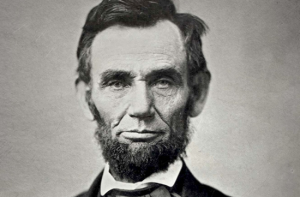 Troubles between the South and North brewed for a very long time, long before Abraham Lincoln was elected President of the United States in 1860.

Summary of the events that precipitated the Civil War

Contrary to popular opinion or misinformed opinion, the American Civil War did not just start solely because of the election of Abraham Lincoln in 1860. The causes of the war evolved in a gradual process. It got to its crescendo in 1854 when Illinois Senator Stephen A. Douglas pushed for the passage of of the Kansas-Nebraska Act. The act nullified the Missouri Compromise of 1820 – an agreement that kept things in check by maintaining relative order between the southern states and the northern states.

When Congress passed the Kansas-Nebraska Act, they in effect legalized slavery in those new territories. What the act did was that it gave those territories the right to determine whether or not  to keep slavery. This caused a huge outrage and resulted in clashes between slave owners and anti-slavery activists. The Republican Party was born out of the opposition to acts like these ones in the northern states. They feared that if something was not done drastically, the South could spread slavery to the North.

In what was seen as deliberately stoking the flames, the U.S. Supreme Court, in 1857, ruled in favor of slavery during the  Dred Scott v. Sandford case. The jurors defended the Kansas-Nebraska Act and the rule of popular sovereignty. Roger B. Taney, U.S. Supreme Court Chief Justice, went as far as saying that the U.S. Constitution did not make any provisions for blacks to have any rights. This sparked further outrage from the camp of abolitionists- primarily Republicans.

One of the most critical event of the 1850s was when a radical abolitionist, named John Brown, raided the Harpers Ferry in 1859.  Sou0..

030thern States became increasingly concerned that the Northern States were pushing for the abolishing of slave trade – their source of economic gain. This led to the secession of several southern states; they cut ties with the federal government in Washington D.C.., United States. Therefore, from an economic point of view, the Southern states that broke away might have been acting in self-centered manner to protect their livelihood.

Southern States break away from the Union

The Confederate States were the secessionists in the south who still wanted to uphold slavery. As at February 1861, there were about 34 states in the U.S. At the beginning, seven southern states broke away and rebelled against the U.S. government. The first to do so was South Carolina. Their secession was complete with the issuance the Ordinance of Secession on December 20, 1860- approximately a month after Abraham Lincoln’s election victory in November, 1860. Subsequently, the states of Mississippi, Florida, Alabama, Georgia, Louisiana, and Texas seceded in similar fashions. Together, the secessionists formed the Confederate States of America. At the helm of affairs was Jefferson Davis. On February, 1861, the Confederates selected Davis as the provisional head (i.e. president) of the Confederate States of America.

The Confederate States expanded and took control of about half of the territories in 11 states. The U.S. government and other countries never formally recognized the southern confederacy. Consequently, a war broke out and lasted for four years.

The Union States and the Confederate States started recruiting their armies in readiness for the war. On April 12 of 1861, the secessionist forces from the south attacked government forces stationed at Fort Sumter, South Carolina. This was the first battlefield of the war. 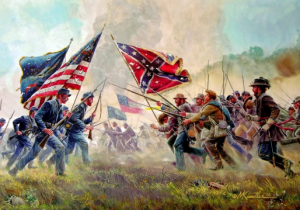 The Northern Union States and the Southern Confederate States in a fierce battle.

After Abraham Lincoln’s inauguration in March of 1861, he ordered a fleet to restock the Fort Sumter.  Confederate forces threatened mayhem and fired the first shots of the war. A commander of the Sumter’s (Robert Anderson) surrendered after two days of intense clashes. Fort Sumter was successfully now in the hands of the Confederates.

Soon, more southern states like Arkansas, Virginia, Tennessee, and North Carolina sided with the Confederates. Other slave states like Kentucky, Missouri and Maryland did not fully break away, however, they were sympathizers of the Confederate States’ cause. Even though the 23 Union States had an advantage in population, the Confederate States had more military might than the North. The South had some very skillful military commanders and soldiers such as Jefferson Davis, Joseph E. Johnston, Braxton Bragg, T.J. “Stonewall” Jackson, James Waddell, and Robert E. lee. These political and military leaders from the South were ready to fight and preserve their slave traditions and States’ Rights.

On July 21, 1861, Commander Thomas Jonathan of the Confederate States deployed over 35,000 soldiers. His troops pushed Union soldiers to retreat to Washington, D.C. This was the First Battle of the Bull Run.

President Lincoln reinforced his side by recruiting 500,000 soldiers to join the battle. At this point, it became clear that the Civil War wasn’t going to be a brief skirmish. Rather, both sides geared up for the long haul.

After two months of fighting, George McClellan replaced the Union Commander Winfield Scott. The Union troops loved McClellan but he was too slow for Abraham Lincoln’s liking. McClellan finally advanced his Army of the Potomac towards a Peninsula between York and Jamestown. His forces were able to capture Yorktown on 4th May 1862. When Confederate forces drove back the McClellan’s army in the Seven Days’ Battle, Lincoln brought his men to Washington.

On 29th August 1862, John Pope led Union soldiers to strike Confederate forces under the command of Jackson. This was the Second Battle of the Bull Run. The next day, Confederate soldiers marched on and massively attacked the Federal (Union)army, driving them back to Washington. General McClellan reorganized his men and hit back at the Confederates on 14th September. Confederates went back to defend along the Antietam Creek.

The war’s bloodiest day occurred on 17th September 1862. The Union Army of the Potomac hit hard at the Confederate forces. On that single day, 12,410 army fatalities were recorded from the Union side. Confederates also lost 13,724 soldiers. By comparison, the Union soldiers had won the battle at the Antietam Creek. Their victory prevented the Confederates from advancing to Maryland. Lincoln replaced the Union commander McClellan after he failed to make good use of their win advantage. The war continued until the armies of both sides settled winter quarters, across Rappahannock – a river in Virginia.

President Lincoln used his victory at Antietam to free all slaves in the defiant states. This Proclamation of Emancipation was after January 1,  1863. Lincoln did not free slaves at the border states who supported the Union fighters. When he freed slaves in the Confederate States, the southern forces were deprived of its labor force. International opinions supported the Unions. Shortly after the Emancipation Proclamation, more black soldiers, numbering over 186,000, joined the Union Army.

The Southern Confederate States eventually lost the battle to the Northern Union States.

The war continued with invasions and victories from both sides. Abraham Lincoln timely replaced his army commanders with better ones. This made the Union army grow stronger; they outsmarted the Confederate forces. By December 1864, Union soldiers had captured Georgia, Petersburg, North Carolina, Columbia and Charleston. When the Confederate army got weakened to its core, they surrendered at the Appomattox House Court on 9th April 1865.

The War ends, and Abraham Lincoln’s gets assassinated

On 14th April 1865 (a Good Friday), an actor and a sympathizer of the Confederates by name John Wilkes Booth assassinated President Lincoln at the Ford’s Theater in Washington. Despite the victory of the Union in the war, their leader was no more. In all, about 600,000 to 1,000,000 people died. By April 26, 1865, the American Civil War had officially ended.

The American Civil War was the conflict that helped abolish slavery. After the war, the Confederate states were dissolved; the Reconstruction Era began. Most importantly, the War also led to the passage and ratification of amendments such as the 13th, 14th and 15th Amendments of the U.S. Constitution.