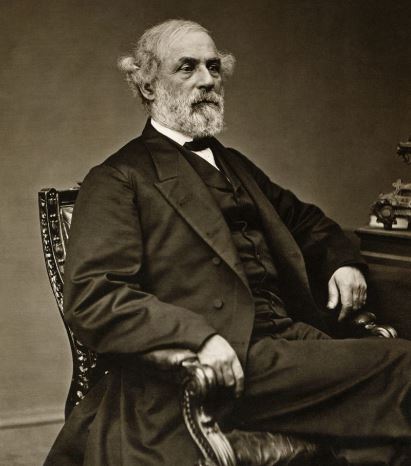 Robert Edward Lee was born on the 19th of January, 1807 in Stratford Hall, Virginia, US. He was born to an aristocratic Virginia family. His father, Henry Lee, was a colonel and served during the American Revolutionary War.

Robert E. Lee married Mary Anna Randolph Cutis and they had several children. Lee started his military career in the United States Army. However, during America’s most fatal war – the American Civil War – Lee was the commander of the Confederate States Army.

Serving as a Colonel in the United States Army from 1829 to 1861 and then later as a General in Chief in the Confederate States Army from 1861 to 1865, he was a man of principle and focus who fought gallantly for any cause that he set his mind to. Depending on whom you ask, Robert E. Lee is remembered in two different ways; in the south as a hero, and in the North, possibly as a traitor.

Cause of death – Pneumonia

For his astounding military mind and tactics, Robert E. Lee is continuously venerated as one of the greatest generals in U.S. history, if not world history in general. In order to emphasize this point, the following are the top accomplishments of Robert E. Lee:

He had an appointment at the United States Military Academy in West Point in 1825 and graduated second in his class. Robert E. Lee distinguished himself academically as a student and he was commissioned as a brevet second lieutenant in the Corps of Engineers of the U.S. Army in June 1829. Lee would proceed to become an officer and also a military engineer in the United States Army, serving for 32 years.

Phenomenal in the Mexican-American War

Robert E. Lee served as a member of staff for fellow Virginian, General Winfield Scott. Thanks to his engineering skills, Lee helped Scott by using tactical arts to find the opponents’ weak points which led to their victory. He was illustrious in the Mexican War. He was in charge of several brave duties which led to America’s victory.

Lee received three brevet promotions for his acts of courage during the war. He also secured promotions beginning from Major to Lieutenant colonel, and then to colonel. At that time, he was considered one of the most intelligent, courageous and daring officers in the U.S. Army.

During the Mexican-American War, Robert Lee, the captain of the engineers, for the first time, worked side by side with Ulysses S. Grant (later Civil War General and 18th President of the United States). Both of them worked closely with each other and ended the war on the 2nd of February, 1848.

Arlington Plantation and the Curtis slaves

George Washington Parke Curtis, Robert E. Lee’s father-in-law died in 1857. He left behind a vast plantation and slaves amidst huge debt. After Curtis’s death, the plantation faced a financial crisis due to improper management. Lee then decided to take charge of the plantation, and for him to take up the management role, he took a two-year leave of absence from the army.

Managing the plantation also involved managing the slaves. These slaves were made to believe that they were to be set free as soon as their master died. Since they felt their freedom was being delayed, some tried escaping but were caught and put in jail. The slaves protested against Lee’s harsh treatment on the plantation and this almost led to a revolt. About five years later, the slaves were set free after filing the deed of manumission.

After the war, Robert served as a superintendent of West Point until 1855 when he left to take a Cavalry position in Texas. In 1859, he was ordered to put down John Brown’s slave rebellion at Harper’s Ferry. John Brown was a leader of a group of abolitionists who were stirring up a slave rebellion. Lee and his soldiers attacked him and his followers since they refused to surrender. This attack was accomplished in an hour with Lee capturing John and his followers.

Abraham Lincoln, the incoming president, signed Lee’s colonelcy in March 1861 after the secession of Texas from the Union in February 1861. To fight the Southern States that had detached themselves from the Union, Lee was offered the rank of Major General after his promotion. He was given a chance to lead an army, which he renamed the Army of Northern Virginia at the Battle of the Seven Pines.

Commander of the Army during the Seven Days Battle

Lee gained admiration from his people and his men gave him the name, ‘Marse Robert’ after his attack against McClellan’s forces in the Seven Days Battle (June 25–July 1, 1862). His serial attacks distorted McClellan’s plans to attack him and his men. These tactical moves made McClellan leave the Peninsula Campaign. It was a battle that recorded one of the heaviest casualties.

Within 90 days after his promotion, Lee had moved the battle lines further by defeating a number of Union forces, including one led by General John Pope at the Battle of Bull Run. With the aim of ending the war, Lee invaded Maryland and Pennsylvania. Hoping that he could gather materials in the Union territory and then influence the upcoming elections.

For the second time, McClellan attacked Lee and his forces at Antietam on the 17th of September. This battle was considered the bloodiest as it recorded great losses on both sides. After the battle of Antietam, Abraham Lincoln ordered another attack on Lee and his force. It was led by Ambrose Burnside, the commander of the Army of Potomac on the 13th of December 1862 at Fredericksburg. Even though the battle was disastrous, Lee came out victorious.

President Lincoln wasn’t deterred by the defeat at Fredericksburg under Commander Burnside. He decided to name another man Joseph Hooker, to command the Army of Potomac. Lee’s army was attacked by Hooker in May 1863 at Chancellorsville. Using tactical means, Lee’s army defeated but lost Jackson his commander amidst great casualties.

Bravery during the American Civil War

Robert E. Lee was an able tactician and commander who in spite of the 4-year bloody civil war was respected by his men and opposing commanders from the Union Army

Robert E. Lee performed the duty as a senior military adviser to Confederate President Jefferson Davis in the first year of the Civil War. As the commander of the Army of Northern Virginia, he conquered most of his battles against the Union armies at the battlefield.

At the beginning of the civil war, Lee was asked by President Abraham Lincoln to lead the Union forces. Robert refused and as a matter of fact, resigned his post because he considered himself a Virginian. His original intention was that he was not going to fight against the South.

The North was against slavery while the South relied on it. Due to this, slavery is considered to be the central cause of the civil war. It created cultural and political division between the North and the South.

General Robert E. Lee opposed succession and in his opinion, slavery was a sinful act. He didn’t join in to fight for the south until his home state, Virginia was invaded. He was the commander of the Army of Northern Virginia in 1862. Lee commanded the Army in the American Civil War from 1862 until its surrender in 1865. The Union Army was forced to withdraw from its position after the attack against George McClellan.

Robert E. Lee achieved some important battle wins over the Union Army, but often his audacious attacks caused him to lose many men, which was even compounding the fast depleting resources of the South. In the dying years of the Civil War, Lee was in charge of all Confederate Armies, and ultimately it was Lee who surrendered to the Union general Ulysses S. Grant.

The Battle of Gettysburg and the Surrender at Appomattox Court House

The Union Army faced great losses after a series of fights and Lee was unsuccessful with his attacks against the North. Even though the army was unable to withstand General Ulysses S. Grant, Lee didn’t listen to the advice to save Vicksburg. In 1863, he attacked the North another time in Pennsylvania at the Battle of Gettysburg (a three-day battle). On the third day of the battle, Robert and his army retreated due to great loss. He was condemned for his aggressive strategies into the Union territory which caused great casualties.

Ulysses S. Grant, in 1864, realizing how weak Lee’s army was, decided to launch a series of attacks. Lee was successful in the initial ones but they were defeated when he sent Jubal A. Early to lead the raid. Robert and his army were outnumbered in the subsequent attack as a result of inadequate supplies. On the 9th of April 1865, he surrendered his army to Ulysses S. Grant at Appomattox Court House in Virginia. After the surrender, he instructed his men to be good citizens, not to fight but go home. This was the end of the civil war. 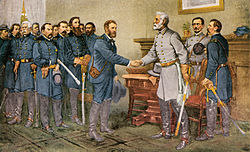 Read More: 10 Most Famous Americans of the Civil War Era

Robert E. Lee became the President of Washington and Lee University in Virginia in 1865. He dedicated his last years to education.  Also, he requested a national reconciliation; he did everything he could to create patch up the relationship between the North and the South.

Due to the exceptional roles he played in the American Army, Bobby Lee was given several nicknames like “Granny Lee”, “Marble Man” and “King of spades”.

Robert E, Lee is remembered in two different ways; in the south as a hero and the North, possibly, as a traitor. He died of pneumonia on the 12th of October 1870 at age 63. In 1975, Robert E. Lee’s citizenship was posthumously restored by the U.S. Congress, effective June 13, 1865. 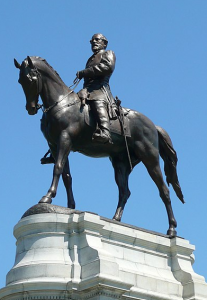 In September 2021, The Robert E. Lee statue was removed in Richmond, Virginia. Richmond was the capital of the Confederacy during the American Civil War. The statue, a symbolic confederate statue, was designed by Mercié, Monument Avenue, Richmond, Virginia, 1890

FACT CHECK: At World History Edu, we strive for utmost accuracy and objectivity. But if you come across something that doesn’t look right, don’t hesitate to leave a comment below.