The First Amendment to the U.S. Constitution: Meaning, Facts & Myths 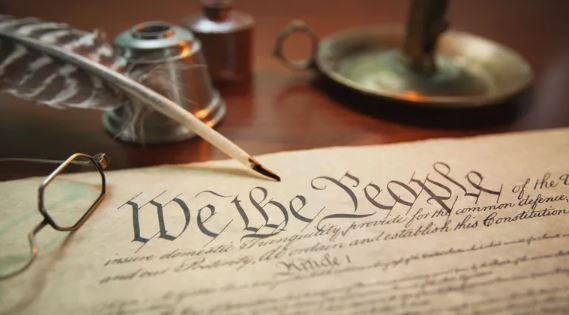 Meaning of the First Amendment

The First Amendment is largely considered the most impressive and most famous amendment in the United States Constitution. It has the following cardinal freedoms and rights that ban the federal and state governments, as well as Congress, from:

Explanation of the First Amendment

The first Amendment spells out Americans’ right in relation to the federal and state governments. Basically, it calls on the U.S. Congress to respect the people’s natural and inalienable liberties and freedoms of religion, speech, and association.

There is a history to the opening clause (i.e. the Establishment Clause) of the First Amendment. Religious oppression was one of the biggest reasons why the early settlers from Europe migrated to the Americas. Before the 18th century, European monarchs were unforgiving when it came to having diverse religious views. Such a draconian interpretation of religion is what forced many early migrants to move to America in the first place.

After the struggle for independence, the Founding Fathers deemed it wise that the first area of concern should be establishing religious freedoms. Their goal was to create a nation that was not going to be modeled on the imperial system of governance in Europe.

Therefore, every individual living in the new nation must be allowed to worship and belief freely, so long as it did not infringe on the rights and freedoms of another person. Unlike imperial rulers and monarchs that forced their subjects to worship and think in a particular way, the U.S. Congress did not see its citizens as subjects.

The Founding Fathers wanted to institute a type of society where every citizen can voice out any concern of his/her without being oppressed by the government.

This freedom does not necessarily shield the speaker if the content of his/her words is false, untrue or damaging to another individual. What this means is that derogatory/racist/sexists or highly inflammable or charged up speech often elicit the ire of the law.

As the Founding Fathers drafted and proclaimed the Declaration of Independence in 1776, they had it at the back of their minds of elevating the press to a status of being the fourth arm of government. They saw how absolutely vital an independent press is. The press played an immense role in disseminating information and ideas in the American colonies. Pressmen and presswomen in the 13 American colonies sent more shivers down the spine of King George III and the British Parliament than a battalion of colonial soldiers.

Therefore, the framers of the U.S. Constitution put in place a clause that keeps the government out of the activities of the press. More often than not, the absence of this freedom brings intolerable consequences to the society. Curtailing people’s ability to freely publish their views or opinions could create a draconian system of government. This is why the First Amendment to the U.S. Constitution explicitly has the freedom-of-the-press clause.

The crucial thing here is the word, truth. The First Amendment considers it a gross violation of the rights of an individual when false statements or lies are published. Neither, does it shield anyone that engages in plagiarism or the theft of ideas of another person.

Gatherings and assembles are the worst nightmare of any dictator or autocratic imperial ruler/emperor. So what do they try to do? They ban peaceful groupings, assemblies, associations and the like.

The framers of the U.S. Constitution were fully aware of this, so they inserted the Right to Assemble in the Bill of Rights. In order to have a functioning democracy, people must have the right to assemble or form groups as they please. The First Amendment grants Americans the right to protest and rally for any cause that they deem fit, so long as the group’s ideology and practices are peaceful, or do not infringe upon the rights of the people.

Today, federal and state institutions in the U.S. uphold and protect this right by issuing out permits to peaceful protesters.

The First Amendment was borne out of the need to have a system in place that allowed people to petition the government. This was very much missing during Britain’s imperial rule in America. On several occasions, the grievances of the people were swept under the carpet. The imperial power of George III was anything but natural; it had no legitimacy.

Who Wrote the First Amendment?

Jefferson and Madison believed that the Constitution had to clearly state these sorts of freedoms and rights in order to have a proper working relationship between the government and the people.

Where did the concept of the First Amendment come from?

The concept that governs the First Amendment did not originate from Madison. It goes back to the Enlightenment Era when philosophers such as John Locke and Cesare Beccaria existed. As a matter fact, the First Amendment was modeled slightly on three very important documents of the past – the Magna Carta (1215); the English Bill of Rights (1689); and the Virginia’s 1776 Declaration of Rights.

The fact that people like Thomas Jefferson and James Madison saw the need for incorporating such a fundamental concept into the U.S. Constitution was in itself a phenomenal achievement.

What is the difference between the First Amendment and the Bill of Rights?

The First Amendment forms part of the first 10 Amendments of the Bill of Rights.

What are some of the instances where one’s freedom of speech could be limited or suppressed?

Over the decades, the U.S. Supreme Court has stepped in to introduce certain limitations to the freedom of speech. The Justices once ruled that the First Amendment does not come to the rescue of individuals whose speeches result in “clear or present danger” to the country or people in general. In times where the nation was faced with a threat or apparent danger, the freedom of speech can be limited. This decision was made in the case of Schenck  v. the United States (1919).

7 Fascinating Facts about the First Amendment

The following are 3 major wrongly held views that cloud people’s understanding of the First Amendment rights:

Are students allowed to voice out their concerns against unjust, improper and offensive behaviors? The simple answer is yes! Remember, the First Amendment regulates the relationship between the people (everyone is included) and the government. Therefore, students’ rights and freedoms CANNOT be abridged by the federal or state authorities. In public-run schools, the right and freedom are protected by the U.S. Constitution. However, in the case of a private-run school, the First Amendment rights cannot be enforced over there. This is because those schools do not fall under the jurisdiction of the federal or state authorities.

If you get offended by someone, the First Amendment won’t swoop in and provide you a redress. It only covers you when the government tries to abuse or suppress your rights. Individual-to-individual relationships get to be handled by different sets of federal or state laws.

However, if the speech or utterances in some way incites violence against another person, then based on some Supreme Court rulings, the First Amendment can come in to regulate those activities.