5 Major Events that Led to the American Revolutionary War

American Revolutionary War | The American colony of Massachusetts was the hotbed of disloyalty. | Image: Depiction of the Battle of Lexington by William Barnes Wollen, 1910

Some of the major events that triggered the eight-year American Revolutionary War (1775-1783) could be traced all the way back to the 1760s, a time when a very indebted Great Britain deployed coercive policies in the American colonies.

London’s goal was to recoup a bit of the fortune it had spent defending the American colonists during the French and Indian War (1754-1763) and the Seven Years’ War (1756-1763).  It turned out that the British Parliament and British Crown (i.e. King George III) gravely underestimated the resolve of their American colonies. The protests and public sabotage of British government officials and goods of the mid-1760s are what culminated into an all-out Revolutionary War in 1775.

Below World History Edu takes a quick look at the 5 major events that led to the American Revolution.

The mid-1760s were very challenging times for Britain’s King George III and his British Parliament. The British Crown was neck deep in debt due to the Seven Years’ War it had waged against France and its Native American allies. With the ending of the war, the American colonies expected the British Crown to ease the tax burden on them, not increase it.

Under the leadership of Prime Minister George Grenville, the British government began clamping down on smuggled goods into the colonies. Grenville’s intension was to raise more revenue from the American ports. Therefore he pushed for the passage of acts such as the Sugar Act and the Stamp Act. The latter act, which was passed in March, 1765, imposed taxes on numerous commercial and official activities across the colonies. Increased taxes (on almanacs, newspapers, contracts, playing cards and others) simply did not sit well with the American colonies, who up until that time was slightly autonomous as they had a huge say on the kind and amount of taxes they would have.

Resentment and angst spread throughout the colonies, particularly in Boston, Massachusetts, whose leading businessmen had formed the Sons of Liberty to defend the rights of Bostonians. Riots, protests, and tarring and feathering of British colonial officials became the order of the day. 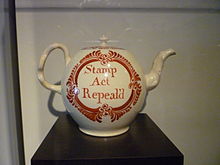 By the time the British government repealed the Stamp Act in March 1766, the die was cast, and there was no turning back as many colonists started resisting every Parliamentary act introduced by Britain. Image: Teapot commemorating the repeal of the Stamp Act

Perhaps feeling disrespected by the actions of American colonists following the Stamp Act, the British Parliament tried to show the colonies who was boss. They did this by passing the Townshend Acts in the middle of 1767. The acts imposed taxes on goods imported (particularly glass, tea, and paper) into the colonies from Great Briatin. The act also stepped up its monitoring and evaluation policies to clamp down on smugglers and unethical port officials. Such measures affected many of the top smugglers in the colony, including John Hancock, a merchant who would go on to be one of the leading Founding Fathers of the United States.

The businessmen and merchants that suffered the most from the Townshend Acts resorted to boycotting goods from Britain. The leaders of the colonies also riled up the public, encouraging them to exact revenge on British government officials and port commissioners. The British government responded to the unfolding chaos and violence by sending more troops to colonies, particularly to Boston, Massachusetts. 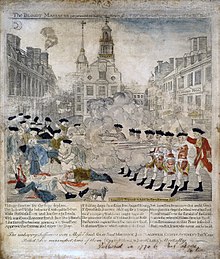 Silversmith Paul Revere’s engraving of the Boston massacre of 1770. The engraving is one of the most famous images of the American Revolution | Image: The Bloody Massacre Perpetrated in King Street Boston on March 5, 1770, a copper engraving by Paul Revere modeled on a drawing by Henry Pelham,

In what was an obvious propaganda tool, the famous 1770 engraving of the Boston Massacre by silversmith Paul Revere was produced less than a month after the Boston Massacre. The Boston Massacre was a pivotal moment in American history. On March 5, 1770, seven British troops opened fire on an irate group of American colonists, killing five people and injuring numerous others. A ruckus had broken out between rowdy colonists and British soldiers (i.e. Red Coats) just in front of the Custom House on King Street in Boston.

Of the five that died, three died on the spot, including African American called Crispus Attucks. The others were Samuel Gray and James Caldwell. In the coming days, Bostonians grew more irritated upon hearing the deaths of two more people (Patrick Carr and Samuel Maverick) as a result of the injuries suffered at the event.

To this day, it remains unclear who gave the British soldiers the order to fire. What is known for a fact is that the soldiers were constantly provoked and abused by the rowdy crowd that had gathered in the street.  Later investigations and court hearings revealed that the riot broke out when wigmaker apprentice got into a fight with Private Hugh White, one of the British soldiers. Feeling very threatened by jeers of the crowd, White called for backup, and in came Captain Thomas Preston and seven soldiers. The arrival of more soldiers only incensed the crowd even more, and in the end, the soldiers opened fire on the crowd.

Did you know: Famous American Revolutionary War General Henry Knox (later Secretary of War) was among the crowd of over 200 colonists at the Boston Massacre?

To put into perspective how extremely important the event was, America’s 2nd president John Adams described the Boston Massacre as the night “the foundation of American was laid”.  Regardless of those opinions, John Adams Josiah Quincy II went ahead and offered their counsel to accused soldiers. They were able to get most the soldiers acquitted, which in turn incited public even further as they felt justice had not be done.

Paul Revere, John Hancock and Samuel Adams (John Adams’ cousin) intensified their efforts to paint the British as tyrants. Similarly, the British embarked on their own version of propaganda. They also continued flexing their military muscle and authority across the colonies. About five years after the Boston Massacre, the American Revolutionary War ignited.

On December 16, 1773, a group of up to 120 men disguised as Native Americans climbed aboard three vessels in the Boston Harbor. The men, who were led by engraver and spy of the Patriots Paul Revere, went on to dump all the ships’ tea cargo into the Boston Harbor. The total amount of tea destroyed that day was in the region of 90,000 pounds, with a value of around one and half million Dollars in today’s money.

The objective of the men’s (i.e. Sons of Liberty) actions was simple: they wanted Britain to repeal the Tea Act of May 10, 1773. Britain had passed the parliamentary act in order to use the taxes to bail out the British East India Company, one of Britain’s most prized jewels of the 17th and 18th centuries. With Britain failing to address the concerns of the American colonists, dumping British-owned tea into the harbor was seen by many Patriots and members of the Sons of Liberty as the last resort. 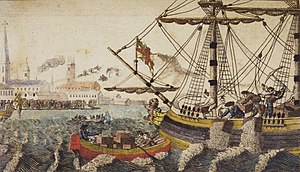 With the progression of time, the American colonies got better at mobilizing themselves and opposed the Tea Act of 1773. The colonists again trumpeted their motto: “no taxation without representation”. Image Source: W.D. Cooper. Boston Tea Party in The History of North America. London: E. Newberry, 1789. Engraving. Plate opposite p. 58. Rare Book and Special Collections Division, Library of Congress

The news of Bostonians destroying British goods and tea incensed London, particularly many members of Parliament who owned shares in the East India Company. The British government tasked the Royal Governor of Massachusetts Thomas Hutchinson to apprehend all the people that were involved in the event.

Britain also responded by introducing the Intolerable Acts in 1774 to punish Boston for the tea destroyed. The British authorities also closed the Boston port. British General Thomas Gage was given wide powers to nip the deteriorating situation in the bud.

All of those measures taken between March and June 1774 were aimed at not only teaching Bostonians a lesson but also restoring the British government’s authority across the thirteen American colonies.

Of all the Coercive Acts passed by the British Parliament in 1774, the Quartering Act was the one that was met with the most resistance from the colonists. The colonists decried quartering of British military officials. Other Coercive Acts passed that year included the Boston Port Act (March 1774), the Administration of Justice Act, the Massachusetts Government Act, and the Quebec Act.

Colonists and Sons of Liberty chapters outside Boston united in solidarity with Boston, with many leading Sons of Liberty members calling for the boycott of British goods and businesses.

In less than a year after the last Intolerable Act of 1774, tensions between the British colonial forces and the American Patriots had reached irreversible levels. The Intolerable Acts are therefore considered one of the pivotal events that plunged the colonies into an open rebellion against Britain’s rule.

Tensions were so high between Great Britain and the American colonies that the British Crown rejected a number of petitions from the First Continental Congress (September 5 – October 26, 1774). As more and more colonies started boycotting British goods, the two parties had a reached a point of no return so to speak.

On April 19, 1775, militiamen from Massachusetts locked horn with British forces in the Battles of Lexington and Concord, the first confrontation of the American Independence War. 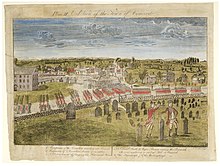 The Battles of Lexington and Concord on April 19, 1775 came on the back of a difficult ten years that saw tensions rise to unimaginable proportion between the American colonies and Great Britain. Britain’s punitive measures had failed to force the colonies into obedience. | Image: The British troops marching out of Boston to Lexington and Concord April 1775