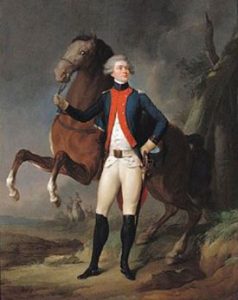 He was named, Marie-Joseph Paul Yves Roch Gilbert du Motier de Lafayette at birth. “The Hero of the Two Worlds” had a function in both the American and French revolutions. This brief history will introduce you to the great French man and let you have a look at his numerous life accomplishments.

The Birth of Marquis de Lafayette

Lafayette was born in Chavaniac-Lafayette, France, to Marie Louise Jolie de La Rivière and Michel Louis Christophe Roche Gilbert Motier on September 6th, 1757. His father was a commissioned military officer of the Grenade Throwers in the French army. Lafayette was born with a silver spoon in his mouth; his family was moneyed due to possessions of vast lands in Chavaniac.

The Early Life of Lafayette

Lafayette’s father was killed in Westphalia after being smashed with a cannonball in a battle against the British on August 1st, 1759. Though the estates went to his mother, he was made Chavaniac’s Lord and was ranked as Marquis. His mother left for Paris with some of her family members so he was brought up by Mme de Chavaniac,  his grandmother, after his mother’s departure.

At age 11, Lafayette moved to live with his mother in Luxembourg Palace, a suburb in Paris. He schooled at Collège du Plessis, a component of the University of Paris. He was then registered to a Musketeers program by his great-grandfather. In April 1770, both his great-grandfather and mother passed away allowing him to inherit an amount of 25,000 livres. He also acquired an amount of 120,000 livres annually at the age of 12 as a result of one of his uncles passing away.

In 1771, he became sous-lieutenant in the Musketeers, where he performed ceremonial roles like military parading and making himself present to King Louis XV.

Lafayette contracted a marriage agreement in 1773 and got married to Marie Adrienne Franҫoise by 1774. His father-in-law was a French noble called Jean-Louis-Paul-Francois de Noailles, who was also a scientist.

Lafayette’s Conviction and Trip to France

Marquis de Lafayette took an interest in the American Revolution.

In April 1773, with the aid of his father-in-law, he became part of the Noailles Dragoons. He ranked as a lieutenant and even became the captain in 1775. Lafayette took an interest in the American Revolution and reconciled it with his beliefs; “My heart was dedicated” he said.

The expedition to North America came to ruins when the British discovered what the French were up to. The British began intimidating their French neighbor with threats of war. Lafayette took his father-in-law’s advice and headed to London to visit the ambassador of Britain in February 1777.

After gaining a meeting with King George III, he stayed in London for three weeks and headed back to France. He hid from his father-in-law upon his return in the hopes of still going to America. Lafayette made his intentions of leaving for America known to his father-in-law through a letter. This provoked his father-in-law. His father-in-law successfully got  an order from France’s king  that prevented French armies from intervening in America.

Lafayette had to obtain a ship himself because the Continental Congress could not afford to provide him one for his trip. He sailed his ship, Victoire, to Bordeaux and made preparations for his voyage. He sailed away but sailed back to Bordeaux upon receiving information about how his family had reacted to him leaving. Lafayette met a man in Bordeaux, De Broglie, who convinced him that the authorities wanted him to go to America. However, this wasn’t true. On April 20th, 1777, Lafayette set sail for North America and arrived two months later (June 13th, 1777) in North Island, a place close to Georgetown.

Lafayette’s Involvement in the American Revolution

Marquis de Lafayette left for Philadelphia after living with Major Benjamin Huger for two weeks. His fluency in English and association with the Freemasons provided him with a lot of opportunities in Philadelphia. On July 31, 1777, he rose to the rank of major general in the Continental Army.

On the 5th of August 1777, Lafayette met George Washington, the Revolution’s Commander in Chief. The two men got along very well. He was taken to Washington’s military camp and eventually became a staff member.

Lafayette got his first taste of combat against the British on September 11th, 1777. However, they were overcome by the British and Hessian army and were forced to retreat. Lafayette was hit in the leg during the combat. Britain came into possession of Philadelphia within a period of one month.

In November that year, Lafayette joined up with General Nathanael Green with a division given to him. On November 24th, 1777, he succeeded in overcoming a Hessian army that had greater numbers in forces, in Gloucester.

Marquis de Lafayette continued to fight under General Washington for the next couple of years. He went back to Paris in 1779. After his arrival in Paris, in February 1779, he attempted to convince France to invade the British. With the aid of Spanish ships in August 1779, their combined forces failed in capturing the British ships due to the opponent’s ships being swifter. He attained the assurance of 6,000 French soldiers to aid in the American Revolution, with the aid of Benjamin Franklin. He headed back to America. On April 27th, 1780 he set foot in Boston.

He rejoined George Washington on May 10th, 1780, in New Jersey. Washington urged Lafayette to send a letter to the state officials in order to acquire more soldiers for the army. However,  the soldiers were, unfortunately, fewer than what was agreed upon. This caused a lapse in his plan to take back New York City.

Cornwallis, the British general that had established the British forces in Yorktown, failed to get aid from their navy because Lafayette had successfully entrapped him with the aid of new French forces. Washington’s armies united with Lafayette’s and beleaguered Yorktown in September 1781. The British defenses finally collapsed and Cornwallis ceded on October 19th, 1781. Lafayette returned to France on December 18th, 1781.

Lafayette’s Involvement in the French Revolution

In May 1789, the French King Louis XVI mobilized an Estates-General to meet formally. Lafayette, being one of the selected to take part in the Estates-General, backed the Third Estate and pushed to have a modern national assembly which would stand in for all of France. He succeeded, and on the 26th of August, Lafayette had his draft for the “Declaration of the Rights of Man and of the Citizen” sanctioned after a period of analysis.

A mob attacked the Bastille on the 15th of July. Lafayette, who became commandant of the National Guard of Paris the following day, rallied his forces and accompanied the King and Queen Marie-Antoinette to Paris. That was after safely removing them from the threat of a mob that had overrun the Versailles on the 6th of October.

On July 17th, 1791, a group gathered at Champ de Maris, which is located in Paris, and made a forceful request for the Louis XVI to step down. Lafayette’s forces ended up shooting the people demonstrating, which led to the deaths and injuries of about 50 individuals. Lafayette gave up his position in the guard because the shootings made his reputation suffer greatly.

Read More about the Major Causes of French Revolution

After he was given command at Metz, Lafayette unsuccessfully attempted to stifle the efforts of the French populists. The revolt was so successful in uprooting the monarchy from power on August 10th, 1792. There was nothing Lafeyette could do to squash the populists. After an order for his arrest was issued by Danton (minister of Justice), Lafayette attempted to escape to the United States by passing through Austrian Netherlands (Belgium) .

With France and Austria at war, Lafayette was imprisoned by the Austrians and their tribunal decided to hold him captive till a new French king ascended the throne and decided his fate. Eventually, Lafayette was released after more than five years of imprisonment kind courtesy to the dialogues made between the French general Napoleon and Austrian officials.  Lafayette left Olmütz on September 19th, 1797. Accompanied by Austrians, he was handed over on October 4th to the American consul.

Marquis de Lafayette managed to return to France under a false identity using the commotion caused by Napoleon’s coup d’état on November 9th, 1799. Napoleon got angry after finding out, but since Adrienne had become friendly with him, she convinced him that her husband was no threat. Napoleon reinstated his citizenship as of March 1st, 1800. Lafayette rejected all positions that were offered to him under Napoleon’s rule. He also refused to be part of U.S. President Thomas Jefferson‘s administration.

In 1807, tragedy struck when he lost his wife. He would go on to live a piped down life in La Grange for a long while.

Marquis de Lafayette became a mayor of La Grange in 1831.

Lafayette became the mayor of La Grange in 1831. He was disappointed in some of Louis-Philippe’s decisions and reprimanded him for acquainting them with censorship at the Chamber meeting in the month of November 1832.

He bit the dust on May 20th, 1834 at the age of 76. His death was due to his pneumonia-related health issue in Paris. Lafayette final resting place was beside his wife at the Picpus Cemetery.