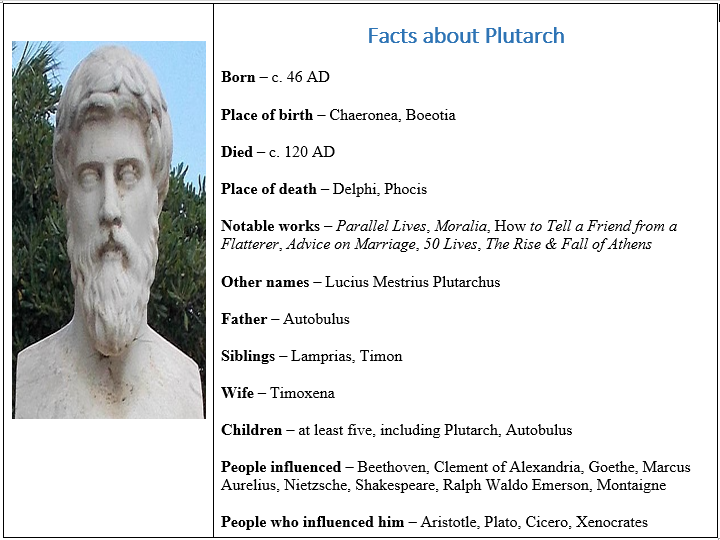 Plutarch (c. 45 AD – c. 120 AD), the renowned Greek historian and philosopher, once described 5th-century BC Greek historian Herodotus as the “Father of Lies”. Plutarch accused Herodotus of inserting unbelievable elements into his works.

Writing about half a millennium after the death of renowned ancient Greek historian Herodotus, a Greek writer and historian by the name of Plutarch (c. 45 AD – c. 120 AD) rose to such an immense acclaim that he could get away with describing Herodotus as “The Father of Lies”. Herodotus wasn’t the only figure from antiquity that Plutarch wrote about. As a matter of fact, a great deal of what we know about significant historical figures like Alexander the Great, Pericles, Themistocles, Augustus Caesar, Queen Cleopatra VII of Egypt, and many others come from Plutarch’s biographical works.

So, without further ado, let us take a look at the life and notable accomplishments of Plutarch, the renowned Greek writer of antiquity who gave the world masterpieces like Parallel Lives.

It’s commonly accepted that Plutarch was born around 45 BC in Thebes, ancient Greece, to a family of reasonable influence and wealth. His family lived in Chaeronea, a small town in the central part of Greece. Plutarch’s father and grandfather were both aristocrats, according to Plutarch’s own works.

Plutarch gained much of his education in the city of Athens, Greece, and Alexandria, Egypt. Right from his early years, he was described as someone who had a deep liking for philosophy and history. He is said to have studied philosophy and mathematics under Ammonius in Athens.

Priest at the oracle of Apollo in Delphi

In his hometown Chaeronea, he worked as a magistrate for some time before becoming a priest at the famous oracle of the Greek god Apollo at Delphi on Mount Parnassus near the Gulf of Corinth. That would mean that Plutarch probably assisted the Pythia – priestess of the oracle – in answering question posed by the patrons of the oracle. Plutarch and his fellow priests at the oracle most likely worked on the task of trying to see what the future held for the people who trooped to Delphi seeking advice. His time at Delphi coincided with a sharp increase in people’s interest in oracle and other cults.

Plutarch was also responsible for the supervision of a number of imperial construction projects in Delphi. It’s possible he served in the office of archon in his hometown for some time.

In his role as the manager of the Amphictyonic League, he probably helped in organizing the Pythian Games. Held in honor of the Greek god Apollo, the Pythian Games were held every four years. They were one of the four Panhellenic Games of Ancient Greece. The other three games were the Olympic Games, the Nemean Games, and the Isthmian Games. 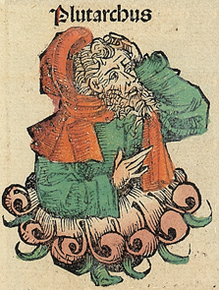 Plutarch was the recipient of a number of awards and titles received from Rome. Image: Greek historian Plutarch in the Nuremberg Chronicle

Being an aristocrat himself, Plutarch got to know important and powerful people in Rome, including statesmen and consuls, including Quintus Sosius Senecio and Gaius Minicius Fundanus. From the Roman consul Lucius Mestrius Florus, Plutarch was able to secure a Roman citizenship, at which point, he came to be known as Lucius Mestrius Plutarchus.

Plutarch was definitely a scholar who was well regarded by the elites in Rome. Emperor Trajan is said to have bestowed upon Plutarch the title of ornamenta consularia – a honorary distinction from the consul office. According to Byzantine historian George Syncellus, Emperor Hadrian appointed Plutarch to serve as the imperial procurator in Achaea. The approval he received in Rome went a long way in cementing him as one of the great thinkers and authors of his era.

Due to the fact that much of his early years were spent as a magistrate, a public servant and priests, Plutarch did not begin writing until around his later years. Moreover, whatever that he wrote in his early years never survived to our modern era.

In his time, he received critical acclaim for works such as Moralia and Catalogue of Lamprias. Plutarch’s works mainly covered biographies, philosophy, religion, music, and rhetoric. In one of his famous works, he shows his profound admiration for Plato by discussing Plato’s Timaeus in his treatise De animae procreation in Timaeo. That work took a bit of swipe at Stoicism and other non-Platonic schools. Regardless, he’s known to have borrowed some things from Stoicism and the Peripatetics (i.e. followers of Aristotle).

Plutarch is also most known for writing of biographies of many Roman emperors, from Augustus to Vitellius. Sadly majority of those biographies have been lost, with only biographies of Otho and Galba surviving.

Works on Theban general Epaminondas and the Greek poet Pindar are just some of the few very important biographies by Plutarch that did not survive. 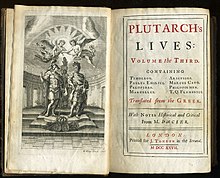 Plutarch’s Parallel Lives  is sometimes known as  Lives Plutarch’s Lives or Lives of the Noble Greeks and Romans. Image: Third Volume of a 1727 edition of Plutarch’s Lives, printed by Jacob Tonson

With Greece and Rome sharing a lot in terms of culture, religion, military, and many other things, Plutarch’s biographies sought to do the exactly this by writing two very beautiful biographies of – one of a Roman and the other of a Greek – and then comparing the two figures. For example, he would write biographical works that compare the famous Macedonian ruler and general Alexander the Great and Roman general Julius Caesar. Plutarch also did a comparative analysis of Scipio Africanus and Epaminondas; and Cicero and Demosthenes. It is for this reason those biographies by Plutarch were called Parallel Lives. Plutarch must have written many of those kinds of comparative biographies; however, only 23 pairs survived.

Some of the other figures that he looked at in Lives include Solon, Agesilaus II, Pelopidas, Timoleon, Alexander the Great, Pyrrhus of Epirus, Mark Antony, and Marcus Junius Brutus. It’s said that Plutarch’s Lives even looked at Greek mythical figures demigod Heracles and hero Theseus.

When describing Julius Caesar’s character, Plutarch praised the Roman general for having the ability to inspire his soldiers. He also talks about how Caesar was assassinated.

With years of experience dealing and interacting with Rome’s elite and politicians, Plutarch decided to come out with a political treatise titled Rules for Politicians (‘Precepts of Statecraft’). The book contained very sound advice on how up and coming public servants ought to conduct themselves.

When it came to providing the physical features of Alexander the Great, Plutarch relied heavily on 4th century BC Greek sculptor Lysippus’s works.

Plutarch was among the most vocal critics of Herodotus because he claimed that Herodotus’ stories were described in such a vivid manner that they had no truth in them. To Plutarch, Herodotus made up most of things he wrote, perhaps in order to entertain his readers. For this, Plutarch described Herodotus as the “Father of Lies” in On the Malice of Herodotus.

In his writings, he frequently deployed a lot of metaphors. This, plus his personal way of writing, made his works come out very unique. Although his eclectic approach has been criticized by some historians, there is no doubt that the approach enriched the historical biographies that he wrote.

In writing the biographies of those historical figures, he did not focus too much on having a chronological account of the figure’s life or the figure’s accomplishments; instead he chose to highlight the character traits of the subjects – both good and bad qualities. He spends a great amount of time analyzing the subject, their virtues and character with some kind of moral lens. He basically describes the subject with very illustrative anecdotes, personal experience and sometimes just hearsay. To Plutarch, this approach of capturing history provided better understanding of who the historical figure was.

For his strong focus on the moral character of those historical subjects in his works, Plutarch has been described as one of the earliest moral philosophers. Moral philosophy is basically study of Ethics, a branch of philosophy that looks at right and wrong behaviors, or good and evil, or virtue and vice, or justice and crime.

Plutarch’s works were widely read for many centuries, from the classical age to our modern era. They featured, and still do, heavily in educational institutions. His works became reputable source materials for many authors, philosophers, and scholars of all shapes and kinds, most notably, French Renaissance philosopher Montaigne, English poet Shakespeare and French-Swiss author Rousseau.