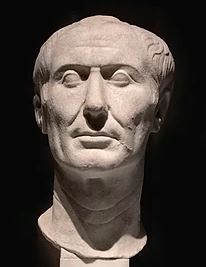 Julius Caesar is looked upon as one of the most excellent political and military-minded leaders in world history. His numerous achievements played a significant role in consolidating expansionary efforts of the early Roman Empire. As we take a look at the history and facts of Julius Caesar, we shall pay close attention to the life and military exploits of this great leader.

When was Julius Caesar Born?

Caesar, whose full name is Gaius Julius Caesar, was born in Rome, Italy on the 12th of July 100 BCE to Gaius Julius Caesar (father) and Aurelia Cotta (mother). Caesar was named after his father. He grew up in an aristocratic family. His father was the governor of the Roman province in Asia. His aunt was married to Marius, who was another great and influential Roman general.

When Caesar was just 16 years old, his father passed away (in 85 BCE), forcing Caesar to take up the role as head of the family. It was around this time that a battle (war) between Caesar’s uncle Marius and Cornelius Sulla broke out. Due to Caesar’s political affiliations, he was appointed the new chief priest of Jupiter (Flamen Dialis) after which he wedded Cornelia – the daughter of Marius’s ally, Lucius Cornelius Cinna.

In 83 BC, Sulla took control of Rome; and due to Caesar’s links with the regime of his uncle, he surely became a target of Sulla. He was stripped of his position and his property was confiscated due to his refusal to divorce his wife Cornelia. The order to do this came from Sulla. Knowing that he was now one of Sulla’s main targets, Caesar had no other option than to flee Rome. He opted to pursue a career in the military, where he served under Marcus Minuscius and also he served in Cilicia under Servilius Isauricus.

During his service in Asia and Cilicia, Caesar served outstandingly and was duly rewarded the Civic Crown for his role in the Siege of Mytilene.

When Sulla died in 78 BCE, Caesar felt that it was now safe return to Rome. He settled temporally at Rhodes, where he studied philosophy. On his trip across the Aegean Sea, Caesar was taken hostage by pirates who insisted for a set fee of twenty talents of silver. However, Caesar convinced the pirates to increase his ransom fee to 50 talents of silver of which his captors agreed to. The ransom was paid and Caesar was set free. He retaliated by organizing a naval force to capture the pirates, who were eventually executed.

When Caesar returned to Rome, and due to financial constraints, he opted to settle in Subura, a lower-class suburb of Rome. In Rome, Caesar made his first stride into politics. He was elected to the military tribune; and in 69 BCE, he was elected as quaestor, where he served in the Roman region of Spain. Caesar’s wife Cornelia kicked the bucket that same year. Cornelia’s funeral was held. Shortly after, Caesar left for Spain.  Between 61 and 60 BCE he served as a governor of the Hispania Ulterior (the Roman territory of Spain).

The First Triumvirate- Julius Caesar’s Alliance with Pompey and Crassus