The phrase “Pyrrhic victory” is used to refer to a situation where the victor in a contest pays a heavy price for the victory. Unbeknownst to many people, the phrase was derived from famed Greek general named Pyrrhus of Epirus. Such was his fame that many considered Pyrrhus, who was intermittently the king of Epirus between 306 and 272 BC, the greatest among the successors of Alexander the Great. In that period, he secured victories against Rome and Macedonia, although at a very a huge cost in both cases.

Who was Pyrrhus, and how come did his name get associated with the phrase?

World History Edu delves into the history, military tactics, conquests and achievements of Pyrrhus of Epirus, a famed military ruler of the Hellenistic period  (323 BC – 31 BC). 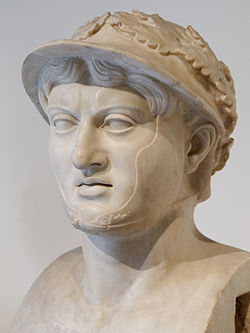 Pyrrhus of Epirus was a very capable Greek military general, statesman and king who was sometimes compared to Alexander the Great. The term ‘Pyrrhic victory’ is used to describe victories that come at a huge sacrifice or loss to the victor. Image: A marble bust of Pyrrhus from the Villa of the Papyri at the National Archaeological Museum of Naples, Italy

Born around 319 BC, Pyrrhus was catapulted to the throne of Epirus at the age of 12. A member of the Greek tribe of Molossians, the teenaged ruler’s empire stretched from northwestern Greece to southern Albania.

However, about five years into his reign, he was overthrown in an uprising led by Cassender in 302 BC.

With the help of Ptolemy I Soter, Pyrrhus was able to wrestle back his throne in 297 BC. He was restored as the co-ruler (along with Neoptolemus) of Epirus. He became the sole ruler after his co-ruler died in an assassination that many believed was orchestrated by Pyrrhus.

It was during his second reign (297 – 272 BC) that he waged very costly campaigns against Rome and Macedonia. He was most known having a very charismatic character that augured well for the morale of the soldiers and officers that rode into battle with him. His ability to hold his own also served as a huge motivation for his army.

At the peak of his power, Pyrrhus controlled places from Epidamnus (Durres in Albania) in the north to Ambracia (Arta in Greece) in the south.

During his first reign, he took Macedon, which was then ruled by Antigonus I Monophthalmus, as his ally. However, the relationship between Pyrrhus and subsequent rulers of Macedon soured. By the reign of Demetrius I Poliorcetes of Macedonia, Macedon had become Pyrrhus sworn enemy. In the war against Macedon, he fought very well, taking control of Thessaly and large parts of the western half of Macedonia. His gains in Macedonia was short-lived as he could not hold the gains he made. Ultimately, Demetrius’s successor, Lysimachus, managed to hold Pyrrhus at bay. Pyrrhus then returned to Epirus because he struggled to get reinforcement.

The year was 282 BC and the Greek city of Tarentum (present day Taranto) was in a losing battle against Rome. Sensing their impending defeat, Tarentum appealed to a number of military generals in mainland Greece. Pyrrhus of Epirus took up the appeal and marched his well-disciplined army of about 26,000 men into southern Italy to the aid of Tarentum.

Pyrrhus’ army, which was said to be composed of heavy cavalry, war elephants and a well-oiled group of Phalangites, proved to be an overwhelming force for the Romans. The general secured two very crucial victories against Rome. The first of those victories came in 280 BC at Heraclea, even though the Romans outnumbered his army. His second victory against the Romans came in 279 BC at Ausculum.

After the very costly victory at Ausculum, Pyrrhus turned his attention to Sicily. He took for himself the title “King of Sicily.” He then proceeded to conquer a number of provinces in the Punic era.

In those two famed victories over the Romans, Pyrrhus is said to have secured at a very steep price. He lost many of his distinguished fighters and officers. Many of those losses came at Ausculum. The fact that he struggled to get any reinforcements from his kingdom prevented him from making any further gains in southern Italy. As a result Pyrrhus headed back home.

Pyrrhus of Epirus’ campaign against the Carthaginians

Beginning around 277 BC, Pyrrhus was drawn into another conflict. That time around he was fighting in support of the Sicilian Greeks who were in a bloody war with the Carthaginians.

Although, Pyrrhus and his army fought very at the onset and secured a few gains, the Carthaginians ended up staying resolute. Pyrrhus therefore was not able to completely remove the Carthaginians from the Sicilian Greek island. Further losses caused him to begin to doubt the true intentions of his allies; hence, Pyrrhus abandoned the campaign.

The following year, in 276 BC, he sent his army again to southern Italy. He fought the Romans at Beneventum in 275 BC. Sensing the war was stalemating, he returned to Tarentum before heading back to his kingdom Epirus.

For about 3 or 4 so years, he led his army to fight on Greek mainland against the likes of Sparta, Argos, and Sparta. One of his most famous victories around this time was against Anigonus II Gonatas, the ruler of Macedon.

How did Pyrrhus die?

The legendary warrior-king Pyrrhus died in 272 BC. In the streets of Argos. The famed military commander was killed after a roof tile was hurled at him by a woman. The woman was the mother of one of his soldiers. According to the story, the woman threw the tile just as Pyrrhus was about to hit her son.

Pyrrhus of Epirus comparisons to Alexander the Great

His intermittent reign between 306 BC and 272 BC saw him wage war against some of the mightiest empires and cities of the time, including Macedonia, Sparta and Rome. As a result of his courage and leadership during battles, he was sometimes compared to Alexander the Great. In terms of military tactics and charisma, no military leader at the time could hold a candle to Pyrrhus of Epirus.

In the centuries following his death, his writings on warfare came to be a staple for many leaders and generals of the ancient time. Unfortunately none of his manuals survived to this day.

A testimony to his military prowess, Pyrrhus of Epirus was described by Hannibal Barca, Rome’s most spiteful enemy, as only second to Alexander the Great. Similarly, ancient writers like Cicero were full of praise and admiration of Pyrrhus of Epirus.