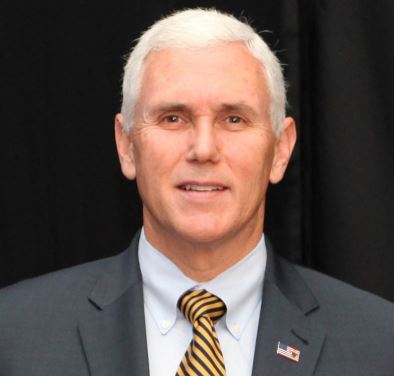 Mike Pence is an American politician and the 48th Vice President of the United States. Prior to taking up residence at Number One Observatory Circle, Mike Pence served as the 50th Governor of Indiana from 2013 to 2017. As governor, Pence rolled out the biggest tax cuts ever seen in Indiana. However, his extreme conservative ideologies have often prompted sharp criticisms from some moderate Republicans and Democrats.  Vice President Pence is commonly regarded as very principled and conservative politician.

Let’s take a look at the biography and significant facts about Mike Pence.

On June 7, 1959, Mike Pence was born in Columbus, Indiana, to parents Edward Joseph Pence Jr. and Nancy Jane.  The family’s line of business was in the management of gas stations. Mike’s father was Korean War veteran, receiving the Bronze Star in 1953. Mike Pence has a total of five siblings. His older brother is Greg Pence, a congressman representing Indiana’s 6th congressional district.

After graduating from Columbus North High School in 1977, Pence proceeded to pursue a degree in history at the Hanover College. He then secured a JD degree at Indiana University in 1986.

In 1985, Pence and Karen Batten tied the knot in 1985. The couple have three children – Michael, Charlotte, and Audrey.

Post his law school days, Pence had about four years in practicing law. In 1988 and 1991, Pence failed to secure a congressional seat. Those two election defeats forced Mike Pence to put his political career on hold. The future vice president of the United States secured a job as radio talk show host in Rushville, Indiana. The name of the show was Washington Update with Mike Pence.

From 1992 to the late 1990s, Pence hosted the The Mike Pence Show on WRCR in Rushville, Indiana. He even had a nickname, “Rush Limbaugh on decaf”.

Towards the beginning of the new millennium, Mike Pence turned his attention away from talk shows in a bid to revive his political career. The opportunity was ripe because long time Representative David M. McIntosh of Indiana’s 2nd congressional district was declined to seek a reelection.

Using the slogan “a Christian, a conservative and a Republican”, Mike Pence was finally able to secure a seat (Indiana’s 2nd congressional district) in the U.S. House.

Being a big fan of strong fiscal discipline and public spending cuts, it was not surprising when Mike Pence passionately opposed President Obama’s 2008 bailout to the big banks amidst the 2007/8 financial crisis.

Pence’s time in the House (12 years in total) was not so memorable. None of the 90 bills that he introduced to floor of the House got passed. This was partly because the Democrats had majority control of the House from 2007 to 2011. Pence did however serve on several House committees, including, Agriculture, International Relations, Judiciary, and Foreign Affairs committees.

Mike Pence’s governorship was characterized by extensive budget cuts in virtually every facet of the Indiana government. His tax cuts in 2013 amounted to over a billion dollars. Never had Indiana witnessed that amount of tax cuts in its history before. Three years into his governorship, Indiana could boast of a $2-billion surplus in her budget. Pence’s sound fiscal discipline helped Indiana’s credit rating score to move to a triple A.

Those spending cuts, as well as poor manufacturing figures, culminated in very lethargic job growth figures in the state. The economy of Indiana performed below average relatively to other states. Due to his long admiration for the Tea Party Movement, Pence’s term in office was one tax cuts and reduced public expenditure.

The Religious Freedom Restoration Act of 2015

The biggest issue that Governor Mike Pence had to deal with was the Indiana Senate Bill 101 – Religious Freedom Restoration Act (RFRA). The bill, which was passed in the State’s House by a vote of 40 to 10 on March 26, 2015, was generally regarded a discriminatory to the rights of LGBT communities in Indiana. It allowed for businesses in Indiana to deny services to customers on the grounds of their sexual orientation.

Pence signed the bill into law on March 26, 2015. In the nutshell, moderate Republicans and Democrats launched a fierce campaign against the law. Many business corporations vowed to halt all expansion works in Indiana. The likes of Tim Cook (Apple CEO), the National Collegiate Athletic Association (NCAA) and Greg Ballard (Republican mayor of Indianapolis, 2008-2016) came out to criticize the RFRA.

Did you know that Mike Pence started off his political career as a Democrat? He even voted for Jimmy Carter during the 1980 U.S. Presidential election.

Pence vehemently stated that the RFRA was in no way going to infringe upon the rights of the LGBT people. He defended the law as one that guaranteed free exercise of religion and freedom of conscience. However, the mounting criticisms of the bill forced Pence to insert a mechanism in the bill that would offer greater protection for gender identity and sexual orientation. He signed the revision on April 2, 2015.

In 2016, Mike Pence was criticized for his signing into laws Acts that restricted abortions on grounds of the fetus’ race, gender, or disability. 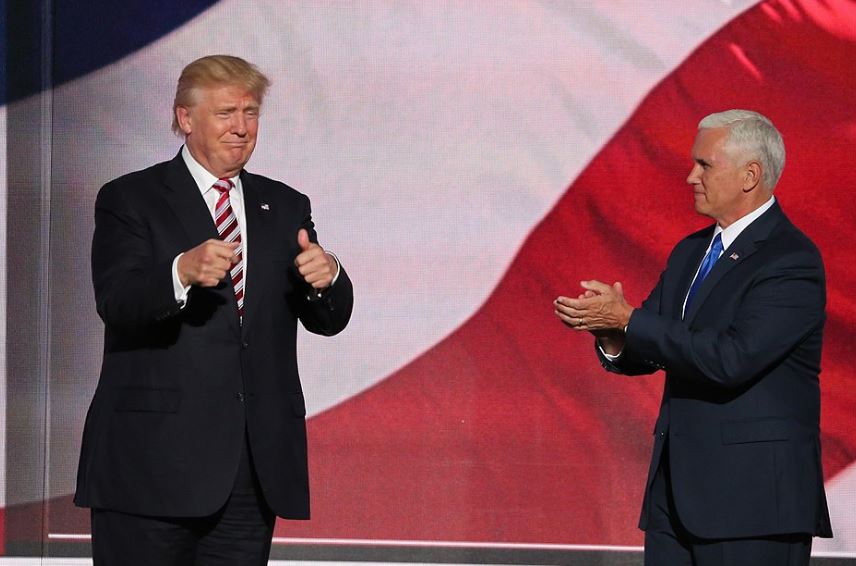 Candidate Donald Trump with his running mate Mike Pence at the RNC, July 2016

Then-presidential candidate Donald Trump selected Mike Pence as his running mate for the 2016 presidential election. Governor Pence was seen as perfect balance the very colorful personality of the real estate business tycoon. His ability to pull voters from conservative sections of the American public was what earned him the nomination on July 15, 2016.

The Republicans went on to defeat Hilary Clinton and her Democratic Party in the election. Mike Pence, then-vice president elect, was named by president-elect Donald Trump to handle the transition process.

Mike Pence was sworn into office on January 20, 2017, becoming the 48th Vice President of the United States. The swearing in was done by Supreme Court Justice Clarence Thomas.

As vice president, Pence jumped straight into backing anti-abortion rallies and organizations. His goal was to ensure that federal funding of abortion clinics across the country ceased.

Mike Pence quote at a luncheon organized by the Susan B. Anthony List & Life Institute

As head of the Senate, Vice President Mike Pence cast a tie breaking vote that helped confirm Trump’s nominee for education secretary – Betsy DeVos. Democratic Senators were opposed DeVos because they believed that DeVos was ill-qualified to head the Department of Education.

In February, 2017, National Security Adviser Michael Finn had to tend in his resignation after it was revealed that he presented false information to then-Vice President elect Mike Pence. The falsehood had to deal with Finn’s interaction with Russian ambassador to the U.S., Sergey Kislyak.

The LGBTQ were again on the back of Mike Pence after he was named head of the U.S. delegation at the PyeongChang Winter Olympics. Some openly gay athletes on the U.S. team alleged that Mike Pence refused meeting with them.

Another initiative that has been dear to Mike Pence and the Trump Administration is the Space Force. In 2018, Pence interacted with top defense officials at the Pentagon. The discussion centered on how America Space Force was to be established.

In 2019, House Speaker Nancy Pelosi kick started the House impeachment hearings against President Donald J. Trump. Trump was accused of abusing the office of the presidency when he exerted pressure on newly elected Ukrainian President Volodymr Zelensky to dig up dirt on former vice president Joe Biden. Pence became embroiled in the hearing. Many Democrats alleged that Vice President Pence was involved in the scandal.

Some Other Interesting Facts about Mike Pence 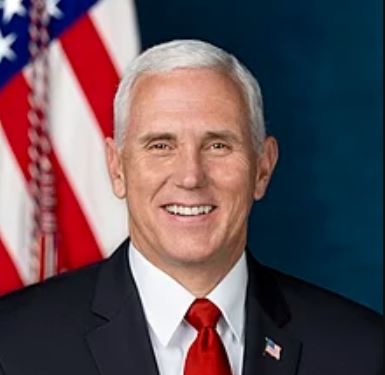