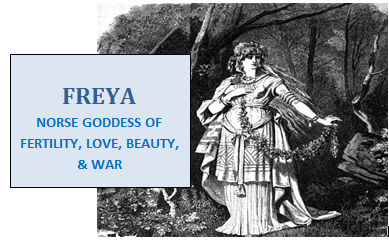 Freya is the Nordic goddess of beauty, fertility, love, sex, and war. In some accounts, she is also the goddess of seiðr, a powerful kind of magic in Norse mythology. Whereas Odin, the Allfather Nordic god, is the chief of the Aesir gods, Freya is considered the matron of the Norse Vanir gods.

In the article below, World History Edu presents everything that you need to know about Freya, including the myths surrounding her powers, abilities, and her heavenly domain Fólkvangr.

Scandinavian and some Icelandic cultures state that Freya’s parents are the Njörðr (Njord) and his sister. According to legend, Freya is twin sister of the Vanir god Freyr, god of good weather, peace, fertility, and prosperity.

In another myth, Freya and her brother Freyr are the children of the sea god Njord and Skadi, the Æsir goddess of mountain and hunting. In this myth, Freyr and Freya are born after the Great Æsir-Vanir War (more below).

She has also been called Valfreyja, which means Lady of the Slain. The last epithet is in reference to her admission into her heavenly domain half of the fallen warriors in battle (more on this below).

When broken down, Freya’s name is related to the Old Norse word for “mistress” or “lady”. Similarly, her brother Freyr’s name evokes a meaning of “Lord”.

Matron goddess of the Vanir

The Vanir in Norse mythology refer to a group of deities generally associated with magic, fertility, prophecy, and wisdom. They are one of the two major pantheons in Nordic and Germanic cultures. The other group of gods is the Norse gods (also known as Æsir), who are ruled by Odin and his wife Frigg.

The Vanir deities dwell at a place called Vanaheimr (“Home of the Vanir”).  Myths about the Vanir are also found in both the Poetic Edda and Snorri Sturluson’s Prose Edda.

The major gods that exist in the Vanir pantheon are the sea god Njord, Kvasir, Freya and Freyr. Some mythologists have opined that the Vanir were predominantly peace-loving fertility deities of Indo-European origins.

In Freya’s case, she is hailed as the protector of the Vanir realm; she’s also been described as the defender/war goddess.

The war goddess of the Vanir

Freya was not your typical kind of war deity, like say Ares in the Greek pantheon, or Odin in Norse pantheon. Instead Freya was in the truest sense a defender of the Vanir gods. In some cases, she has had to go to war to defend her people. She uses war as only the last resort to protect her people. With her husband Odr most likely away all the time, there was no one among the Vanir capable of taking charge of the war duties. Freya had to take on the role of war goddess in addition to her being the god of love, fertility, beauty, and magic.

Norse myths tell of a time when the relationship between the Æsir gods and the Vanir gods was frosty at best. The two groups of gods clashed for reasons unbeknownst to modern scholars and mythologists today. It is most likely that the conflict was triggered due to the overaggressive stance the Æsir gods took against quite frankly peace-loving Vanir gods.

Ultimately the two sides were able to put aside their differences and become partners. Their pantheons also merged as well, with many of the Vanir gods, including Freya, becoming honorary Æsir deities.

As stated earlier, Freya is daughter of the Vanir god of the sea, Njord, and one of his unnamed sisters. Her twin brother is the fertility and harvest god Freyr.

According to the Prose Edda, together with her consort Óðr, Freya gave birth to the deities Hnoss. In the Heimskringla, Freya and her consort Odr also give birth to the goddess Gersemi. Snorri Sturluson describes the two daughters of Freya as extremely beautiful that their names became synonymous with precious things.

With the myths available, it is unclear as to who exactly was Freya’s husband Odr. In some oral accounts, Odr is seen as a form of the Aesir Allfather god Odin. In another account, Odr is seen as a giant, perhaps related to the jötnar (giants). What seems to be obviously clear in many of the myths is that Odr is an absent husband. This point is reinforced in many myths that talk about how Freya, under different disguises and names, roams the Nine Realms in search for Odr. In the poem Hyndluljóð, Freya is said to even cry tears that come out as red gold for her always-absent husband Odr. 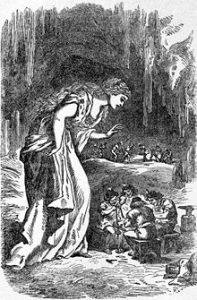 The goddess Freya had to sleep with four dwarfs in order to obtain the necklace Brisingamen. | Picture: “Freyja in the Dwarf’s Cave” (1891) by Louis Huard

In the myths, Freya owns a magical necklace named Brísingamen, also known as “Brísinga”. The name of the necklace translates into “flaming” or “glowing”. The necklace was said to have been made by the dwarfs, the master craftsmen in Norse mythology. To secure the necklace, the goddess had to sleep with all the four dwarfs that made the necklace.

In one of the myths, Freya’s necklace gets stolen by the trickster god Loki. Freya then asks the god Heimdallr to retrieve the necklace. After a fierce duel with Loki, Heimdallr comes out tops and takes the necklace back to Freya.

In attempt to get back his hammer Mjollnir from the jotunn Prymr, Thor disguises himself as Freya. To make the disguise complete, Thor borrows Freya’s necklace. 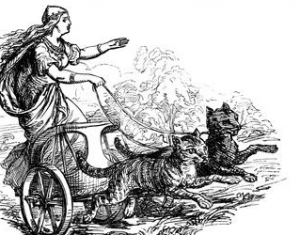 Norse goddess Freya – Mother goddess, Mistress of the realm of Fólkvangr, and defender of the Vanir gods

The Norse goddess Freya is generally depicted riding her chariot, which is drawn by two cats. She is also almost always depicted with the boar Hildisvini by her side.

Another very important symbol of Freya is the magical necklace Brisingamen, one of the most beautiful pieces of jewelry in Norse mythology. 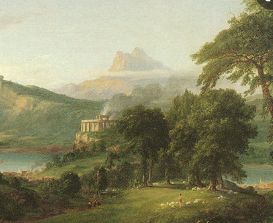 Freya’s hall Fólkvangr is seen as an alternative to Odin’s Valhalla.

In Norse myths, half of the fallen warriors in battle go to Odin’s Golden Hall (i.e. Valhalla), while the remaining half go to Freya’s domain Fólkvangr.

Similar to Odin’s Valhalla (also known as Valholl), Freya’s Fólkvangr is located in Asgard, the home of the Aesir gods. According to Gylgaginning, chapter 24 of the Prose Edda, the slain warriors dine and make merry in a very huge and magnificent hall called Sessrúmnir (“seat-room”).

Again to similar to the warriors in Valhalla, the warriors in Freya’s hall patiently await for the End of the World (i.e. Ragnarok), where they would join march alongside the Aesir gods to fight against the forces of evil and chaos.

Due to the similarity in characteristics Freya and Frigg possess, some scholars and Norse mythologists have opined that the two goddesses are in fact the same. The confusion between Freya and Frigg stems from the fact that both their husbands – Odr and Odin – were sometimes seen as the same individual.

Due to the role she plays, her name is mentioned a number of times in both Hyndluljóð and the Poetic Edda, particularly in poems like Völuspá, Grímnismál, Þrymskviða, and Lokasenna.

In the poem Hyndluljóð, which is also known as Lay of Hynadla, Freya encounters a völva (Norse for a female shaman/seer) called Hyndla. The two women then embark on a journey to Valhalla on a fact finding mission about Ottarr. Hyndla rides a wolf, while the goddess Freya rides the magical boar Hildisvini.

In honor of Freya, Norse women preferred marrying Viking warlords. Thus aside from the obvious economic and security advantages of marrying a Viking warrior or warlord, the act in itself was seen as a way to represent Freya’s marriage to Odin, who by the way was also a god of war.

In one account by a Lombard historian and author Paul the Deacon, Freya is believed to have come to the aid of the Lombards in their war against the Vandals. According to the story, the Vandals prayed to Odin for his favor, while the Lombards prayed to Frea (Freya). Using her magic, Freya was able to maneuver her way around Odin and thereby secure victory for the Lombards over the Vandals. 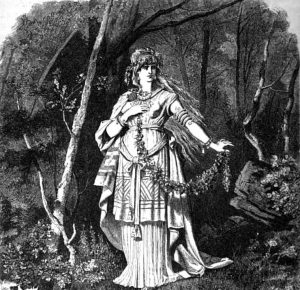 Freya, also spelled Freyja, is a very influential Nordic goddess of fertility, love, beauty, lust,  as well as war and magic (seiðr). The magic that Freya possesses is said to be a special kind of Norse magic that allows her to manipulate those that seek to harm her people.

Among the Vanir gods, Freya is considered the most skilled deity in the art of magic and sorcery.

Additionally, Freya is most known for being an extremely beautiful goddess in Norse mythology. This explains why many jötnar (giants) sought her hand in marriage. In some cases, those giants even tried to kidnap her and then send her to their homeland Jǫtunheimr.

The Aesir gods, fully aware Freya’s qualities and abilities and her being a well-sought after bride, exploited the situation to their advantage. In one of the myths, the gods promise a master builder (a jotunn) Freya’s hand in marriage in exchange for the services of the builder. In the end, the gods, with the help of Loki, reneged on their promise and afterward kill the builder. 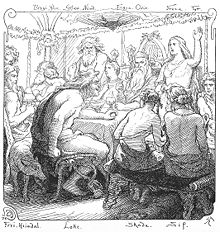 The Norse trickster god Loki is infamous for his mischief and numerous flyting (quarrels) with many Norse gods. In one of his highly charge flyting bout, he accuses all the goddesses present at feast of being adulterous. Loki vents much of his poisonous words against the goddess Freya, stating that the goddess is a promiscuous deity who had bedded every Norse god and elf in the hall. Freya then rejects Loki’s accusations, calling him a liar. Loki responds by accusing Freya of witchcraft and dark magic. As things get more heated up, Freya’s father Njord (Njörðr) steps in to calm the situation down. Njörðr tells everyone in the hall that there was nothing wrong for the gods to have more than one partner.

Freya’s equivalent in other world pantheons

Being a goddess of love, beauty and lust, Freya’s equivalent in the Greek pantheon is none other than Aphrodite. That will mean that her Roman equivalent is the goddess Venus. And as mother goddess, her Egyptian equivalent can either be Isis or Hathor.