Norse mythology is full of stories describing spectacular structures and regions throughout the Nine Realms. Of all those regions, none compares to the sheer elegance and greatness of Valhalla – Odin’s golden hall in Asgard. This great hall is most famous for hosting huge feasts that bring together the mightiest Norse heroes to dine and wine. In many Scandinavian and Icelandic cultures, Valhalla is more than just a heaven-like environment where people hoped their loved ones would go to after death. Instead, the golden hall of Valhalla, a glorious and desirable place in all the Nine Realms, offered fallen heroes in battle an opportunity to attain further greatness in the afterlife.

Valhalla and the Valkyries

In Norse mythology, the Valkyries are fierce women warriors who choose which warrior gets admitted to the Valhalla.  These gorgeous shieldmaidens are therefore known as the “Choosers of the Slain”.

A paradise for the most distinguished fallen warriors

It is believed that the Allfather Odin has a very deep appreciation for warriors who get slain on the battle field. Odin’s great hall is therefore not a place of misery; instead it’s a place of merry making and dining where the heroic achievements of those slain warriors (known as einherjar) are celebrated in the presence of Odin and the Valkyries.

Per the descriptions in Old Norse literature – such as the Poetic Edda and the Prose Edda – Odin’s great hall is truly a magnificent edifice to behold. Decorated with some of the finest precious minerals and gold (most likely from the dwarfs), the hall is said to be situated right in the middle of Asgard.

What does Valhalla represent?

In Norse mythology, Valhalla represents the perfect afterlife conditions that a Viking warrior hopes to secure after death. | Picture: Valhalla (1905) by Emil Doepler

In simple terms, Valhalla was the place every deceased warrior wished to go after death. Scandinavian and Icelandic cultures held the belief that getting admitted into Valhalla was the greatest honor a warrior could get. To the Norse people, Valhalla was a better region than Hel, a place where interesting happened anyway. The promise of eating, dining and later fighting side-by-side with Odin and other Aesir gods was way more attractive than spending an eternity residing in a place like Hel. And even though they knew that the brave fallen warriors are destined to be defeated alongside Odin during Ragnarök, they somehow found a second glorious death more alluring than Hel.

According to the myth, almost every item in the golden hall bares testimony to magnificence and splendor of the hall. The myth goes on to say that the builders of Valhalla made the roof from the shields of Norse heroes and slain warriors. The hall’s rafters were made from the warriors’ spears, while the furniture in the hall came from the breastplates of warriors.

Standing guard at the entrance of the mighty gates of Valhalla are two very fierce wolves. A powerful eagle soared above Valhalla in order to keep watch of the outer perimeter of the great hall.

According to the myth, the interior of Odin’s Hall is even more spectacular than the exterior. The hall has about 540 doors, with each door guarded by fierce wolf. It was also believed that a whopping 800 warriors could go through a single door all at the same time.

In the dining hall, Odin’s fallen heroes sit in chairs made out of the breastplates of the warriors armor. Another very spectacular feature of Odin’s Hall is the bench. The benches in the hall are believed to be covered in coats of mail instead of the usual hay.

Sitting at the center of the high table is Odin. The Allfather’s throne is flanked on both sides by his two wolves, Geri and Freki. Perched on both shoulders of Odin are his very wise ravens, Huginn and Muninn.

Valhalla is one of the realms in the afterlife of Norse mythology. Only warriors that have fallen bravely on the battlefields were allowed into Valhalla. Those who died of natural causes and other forms of illnesses could not make their way into Valhalla.

Selection of the people that make it into Valhalla was done by Valkyries. The Valkyries ride on their flying horses, hovering over the pile of dead warriors in order to select the distinguished warriors and heroes that get to make it into Odin’s golden hall. Once the fallen warrior had been selected, he/she is greeted at the entrance of the great hall by Bragi, a Norse god of poetry.

What happens in Valhalla?

According to legend, the fallen warriors that reside in Valhalla fight among each other by the day, as they need to get ready for Ragnarok, the final battle of the gods. The fallen warriors, who are known as Einherjer, also accompany their chief patron Odin on voyages and other quests. Those that sustained injuries or even died during the day magically get regenerated by evening. The warriors then spend the rest of the night drinking and feasting. Odin, however, does not eat any of the meat; instead he sustains himself by drinking on the mead.

The role of the Valkyries 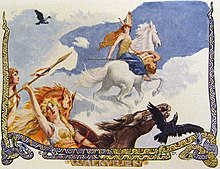 As stated above, the Valkyries are a group of warrior maidens that serve the All-father Odin. These maiden warriors donned battle armor with flashing shields and helmets. The appearance of the Valkyries was a sign that war, carnage, death and bloodshed were about to be unleashed. Picture: Walkyrien (c. 1905) by Emil Doepler

It is well-known that the Valkyries in Norse mythology are the ones that determine which fallen warrior gets admitted into Valhalla. However, the role of Valkyries went beyond just being the “Choosers of the Slain”. In some cases they picked sides in the battles among mortals.

The Valkyries were believed to be strong and very powerful women warriors who sometimes interfered in the outcome of the battles. If the Valkyries favored one side, they would offer to protect the lives and armies of the people. On the flip side, the Valkyries could also exact pain and unimaginable suffering on the warriors or people who displeased them.

In the hall of Valhalla, Odin’s Valkyries are the ones who serve the food and drinks to the warriors. The horses that were slain with their masters on the battlefield also get to go to Valhalla. According to the myth, those horses are placed in magnificent stables and attended to by the Valkyries.

Food and drink in Valhalla

In addition to the fallen warriors that reside in Valhalla, there are a number of magical creatures that call Valhalla home. The first noticeable creature is the magical boar called Saehrimnir (or Saerimnir). According to the myth the boar is imbued with magical abilities by the gods to automatically get regenerated every time it is feasted upon by the fallen warriors. By so doing, the warriors in Valhalla have access to an endless supply of meat from the boar.

The next magical creature is the great she-goat Heidrun, which stands on the golden roof of Valhalla eating the leaves from the magic tree. This legendary she-goat is said to produce an endless supply of mead from her udders. This explains how the warriors are able to feast and drink in wild abandon in Valhalla.

For clean water, the inhabitants of Valhalla drink the water produced from the hart Eikthyrnir. The water is believe to be extremely clean and nourishing.

According to Snorri Sturluson’s Prose Edda, Glasir is the golden red-bearing leaf tree found just outside of Valhalla. The Glasir, which means “gleaming” in Old Norse, is described as the most beautiful in Asgard.

Odin’s goal in building Valhalla was not for warriors to drink and dine forever; rather the All-father built Valhalla to amass enough brave and skilled warriors that will fight side-by-side with the gods during Ragnarok. Known as the End of Days, or the Twilight of the Gods, Ragnarok is a fierce battle that will pit the forces of evil, led by Loki and his race of giants (i.e. jötnar), against the Norse gods, led by Odin himself.

Upon hearing of this prophecy, Odin set out to assembly an army of fallen warriors to help him vanquish Loki’s forces. However, Odin, as well as many of the Norse gods, are fated to die in Ragnarok. Riding his eight-legged horse Sleipnir, Odin will charge into battle to face the great wolf Fenrir, only for Odin to be devoured by the wolf. Ultimately the forces of good vanquish the forces of evil; however, it comes at a huge cost to the gods.

The above explains why the fallen warriors in Valhalla are said to train on a daily basis, as they look forward to fighting bravely in that one final battle.

Read more: Everything you need to know about Ragnarok, the End of the World in Norse Mythology

Odin, the all wise and all-knowing god in Norse mythology, built Valhalla to prepare himself and the great warriors of Valhalla for an inevitable battle against the forces of evil. However, Odin’s preparation is destined to be an exercise in futility, as the he, along with many Norse gods, perish during Ragnarok.

Note: Asgard is the realm of the Norse gods. It is one of the Nine Realms in Norse mythology. Other realms include, Midgard, the realm of humans, and Hel, the Underworld which is ruled by Hel, Queen of the Dead.

The three major realms of the dead in Norse mythology – Valhalla, Hel, and Fólkvangr

In Norse mythology, the land of dead is basically divided into three main regions – Valhalla, Hel (or Helheim), and Fólkvangr.

As stated above Valhalla is a region in the afterlife where only the bravest of fallen warriors go. So the question that begs to be answered is: what happens to the not so brave fallen warriors? What about the folks at home who die of natural causes or those who die of old age?

In Norse mythology, Valhalla is one of the three main places that the dead make their way. The other two places in the afterlife are Hel (also known as Helheim) and Fólkvangr.

The afterlife region of Fólkvangr in Norse mythology is the complete opposite of Valhalla. Fólkvangr is believed to be the realm of the Norse goddess Freyja, the deity of fertility, beauty, and war. Freyja is said to have been impressed by her husband Odin’s great hall; therefore the goddess decided to build a hall for herself and the fallen warriors that were not selected by the Valkyries. Freyja’s hall therefore offers an alternative to Odin’s great hall by providing a place for the not-so-brave dead warriors. According to some Norse myths, Fólkvangr also accepts women that died in childbirth.

Hel (also known as Helheim), not to be confused with the Hell in many Abrahamic religions, is a cold and quite frankly an uninteresting desolate place where people who died of natural causes make their way to. Part of the Niflheim realm, Hel is said to have no living thing. The dead who find their way to hell are said to live an ordinary life just like the one they had lived on earth. In many of the myths, Hel is presided over by the goddess Hel, also known as the queen of the Underworld. The goddess Hel is also often regarded as one of the children of the trickster god Loki.

Commissioned by King Ludwig I of Bavaria, the Walhalla Temple was designed by German neoclassicist architect Leo von Klenze. Located in Donaustauf bei Regensburg, Germany, the building is in honor of renowned German-speaking artists, scholars, philosophers, scientists, and other historic figures.