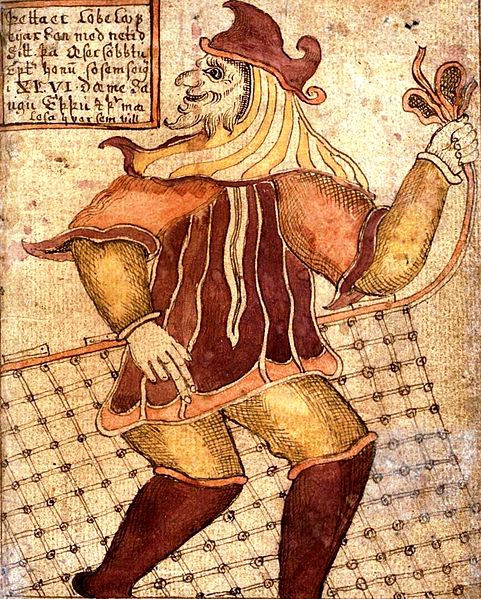 Association: Odin, Thor, and a host of other Aesir gods

Epithets: Contriver of all fraud; Shape-Changer; Sly-One; Wizard of Lies; Thief of Giants; Evil Companion; Kinsman of Sleipnir; Foe of the Gods; Forger of Evil; Contriver of Baldr’s death; Wrangling Foe of Heimdallr

Loki, the Norse god whose mischief and shenanigans knew no limits, was such an ambiguous character, with his role moving from darkly malicious and evil to helpful but cunning. Loki’s name thus elicits both positive and negative connotations in Norse mythology.

As the god of mischief, Loki had several banters with his fellow gods and beings in Asgard. Often times called the Sly-God, his actions led to dangerous consequences and chaotic events across the nine realms. Who exactly was Loki, and how did he become the god of mischief?

Some Poetic Edda poems called him using an Old Norse word Loptr. The word evokes a meaning of “air” or “atmosphere”. He has also been called Hveðrungr– a an Old Norse word which translates into ‘roarer’ – perhaps a reference to his dark side, or the roars of pain he made while he was chained to a rock as punishment for killing Baldr [more of that later on].

Loki has been described in many Poetic Edda poems as the “blood brother” of Odin, or in some cases, the brother of Thor. For this reason, he is often associated with the Aesir gods – a group of warrior and ruler gods who at one point in time fought against the Vanirs (deities of agriculture, fertility and commerce).

Loki’s origin actually traces to the Jötunns – a race of giants and malicious mythical beings that were often the sworn enemies of the Aesirs and the Vanirs.

Who were the children of Loki?

According to Snorri’s Prose Edda, Loki has been described as the son of Fárbauti and Laufey (or Nál). This makes him the brother of Helblindi and Byleistr. Loki fathered many children, animals, monsters and beasts alike. With his wife Sigyn, Loki fathered two children – Narfi (Nari) and Vali

Loki’s union with the Jötunn Angrboda produced “the wolf” – a reference to Fenrir, the wolf who swallows Odin in Ragnarök .

According to another Prose Edda, Loki gave birth to the horse Sleipnir after mating with the stallion Svaðilfari.

In addition to Fenrir, Loki fathered the Midgard serpent Jörmungandr, and the fearsome being Hel (ruler of the realm of the dead). Those three children of Loki were fated to cause havoc to the Aesir gods, ushering in Ragnarök. For example, Jörmungandr is slated to kill Thor during the apocalypse while the wolf Fenrir is destined to swallow Odin.

His gravest misdeed was when he murdered Baldr – the son of the goddess Frigg. It is unclear whether Loki committed this act out of sheer malevolence or envy.

The story begins when Frigg (the Vanir goddess of love and fertility) commands every animate and inanimate object in the universe to never harm Baldr. This makes her son invincible. Frigg however fails to consult with the mistletoe, thinking the tree could never pose any harm to Baldr.

With his new found invincibility, Baldr asks the gods to throw everything they got at him. One by one, all the arrows shot at Baldr bounce off him.

Fully aware that Frigg failed to consult with the mistletoe, Loki fashions out an arrow from the plant. The god of mischief presents the arrow to the blind god Hodr – Baldr’s brother. Hodr shoots the arrow straight into the heart of Baldr, killing Baldr on the spot. Realizing he’s been tricked, Hodr flees the scene into the woods.

One of the gods, Hermodr, makes a quick dash to the Underworld in a bid to bring Baldr back to life. However, he is unable to meet the requirements imposed by Hel, the ruler of the underworld. Frustrated and angered by the actions of Loki, the gods go after Loki, who had turned into a salmon to evade capture.

The Prose Edda goes on to say that the gods eventually apprehend Loki and sentence him to a life of pain and torture. They also go after the Loki’s two children, Narfi and Váli. The latter was turned into a wolf, who went on to kill Narfi. The gods then used the intestines of Narfi to bind Loki to a stone. They placed a venomous snake on Loki’s head; and every time the snake’s venom fell on top of Loki’s face, the Sly God would scream and writhe in pain, which caused earthquakes around the world.

Ragnarök – the end of a cycle, or the demise of the old gods – was partly caused by the death of Baldr. The god’s death heightened the animosity between the Aesir gods and the Jötunns, who were often supported by the creatures from the Underworld.

According an Old Norse prophecy, Ragnarök would begin when Loki escapes his bondage and takes charge of the armies of the giants in a battle against the Aesir gods.

Loki is fated to sail to Vigridr – the battle field – along with Hel and other bad spirits from the underworld. Majority, if not all, of all the Aesir gods are destined to die. This includes Odin, Thor and Heimdallr. Odin would be swallowed by Loki’s son, Fenrir; Thor is expected to die at the hands of Jörmungandr, the sea serpent; and Heimdallr and Loki would both die after an intense face off against each other. 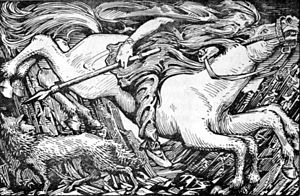 Loki, disguised as a mare, mated with a builder’s stallion called Svaðilfari. From that union came forth Sleipnir – a lightning speed eight-legged horse, who later served as Odin’s trusted horse. How was Sleipnir born in the first place?

The story begins when the Aesir gods employ the services of a builder to construct a wall around the home of the gods so as to keep intruders away. In exchange for his services, the builder requests that the goddess Freyja given to him as a wife. He also asks for the moon and the sun. The gods agree to the deal provided the builder uses three seasons to finish the construction. They also insist that the builder does the construction without the assistance of any man.

Unbeknownst to the gods, the builder had a powerful horse called Svaðilfari. The builder’s horse does all the heavy lifting, keeping the project well on course to completion.

Fearing that they could not fully pay the builder, the gods demand that Loki intervenes and thwarts the progress of the builder. Threatened with death, Loki turns himself into a beautiful mare so as to lure the builder’s stallion away from the project.

Loki meaning and mischief | Loki and Svaðilfari (1909) by Dorothy Hardy

Just as expected, Svaðilfari follows the mare into woods. With the stallion gone, the builder fails to meet the deadline. Upon finding out that the gods deceived him, the builder storms into the halls of the gods, only to be confronted by Thor. The builder ends up dying at the hands of Thor.

As for Loki (who was still disguised as a mare), his union with the builder’s stallion ends up bringing forth an eight-legged horse called Sleipnir. The extremely fast and strong horse was described as the best horse in all of the nine realms.

The term flyting refers to a situation where two or more parties exchange insults (i.e. quarrel) using poems or some sort of poetry.

In one account of the story (found in the poem Lokasenna), the trickster god Loki got into a heavy flyting with the gods in  of hall of Ægir (a sea nymph/giantess). Loki levied several insults on the gods, accusing them of being cowards and mocking their arrogance and perverse sexual habits.

Following the gods praises on Fimageng and Eldir – associates of Ægir – Loki, full of envy, kills Fimafeng. Taken aback by Loki’s disrespect, the gods banish Loki out of the event and sends the Sly god running into the forests.

No sooner had the gods returned to the hall of Ægir to continue feasting than did Loki make a return. This time around, Loki insults everyone in the hall, including the likes of Odin, Víðarr (Odin’s son), Frigg (Odin’s wife and mother of Baldr), Iðunn, Gefjun, siblings Freyr and Freyja, Njörðr (Freyja and Freyr’s father), Heimdallr (the watchman of the gods), and Sif (Thor’s wife).

Loki’s barrage of insults (flyting) continues as he consumes more and more mead (alcohol). Suddenly, the surrounding mountains begin to tremble, a sign of Thor’s arrival. The god of thunder commands Loki to take a seat and halt his insults against the gods. Thor further calls Loki an “evil creature” and threatened to strike Loki with his magical hammer, Mjöllnir.

Fearing Thor could make good on his promise to strike him, Loki capitulates and leaves the hall. Before leaving, however, Loki rains down a number of curses on all the Aesir gods present in the hall of Aegir.

Incensed by the scathing insults from Loki, the gods rounded up Loki, who had shape-shifted into a salmon in a waterfall to invade capture. The gods proceed to inflict immense punishment on Loki for his transgressions as well as for the murder of Baldr. They used the intestines of Narfi (Loki’s son with Sigyn) to bind Loki to a rock.

The gods then place a large python above Loki’s head. And with every drip of the python’s venom, the trickster god cringed in unimaginable pain. His pain was mitigated a bit after his wife Sigyn placed a cup above his head to collect the venom that dripped down. However, in those brief moments that Sigyn had to empty the cup off its content, the venom fell directly on Loki’s head, causing him to bellow out screams so violent that earth trembled.

In some accounts of Norse myths, Loki is portrayed as a very kind but shrewd god. For example, in the poem Þrymskviða, Loki helps Thor get back his stolen hammer. Before embarking on their journey, Loki and Thor borrow Freyja’s feather cloak. The cloak allows Loki to fly off into the land of the giants (Jötunheim).

In Jötunheim, Loki meets up with the Jötunn Þrym and successfully tricks Þrym into revealing the location of Thor’s hammer. Þrym states that he hid Thor’s hammer deep beneath the earth. The giant also reveals that the only way to get Thor’s hammer back was if the goddess Freyja is married off to him.

Freyja vehemently refuses complying with Þrym’s request. So the gods decide that Thor dress as Freyja, donning all her beautiful jewels and clothes.

Thor, disguised as Freyja, and Loki disguised as a maid arrive in Jötunheimr to a splendid reception and dinner. As a form of gift to the bride, one of the giants brings out Thor’s hammer and places it before Thor. No sooner had the hammer been placed beside Thor than did Thor grab the hammer. The god of thunder and Loki went on to lay waste to the ceremony, mercilessly beating the giants before flying back to Asgard.