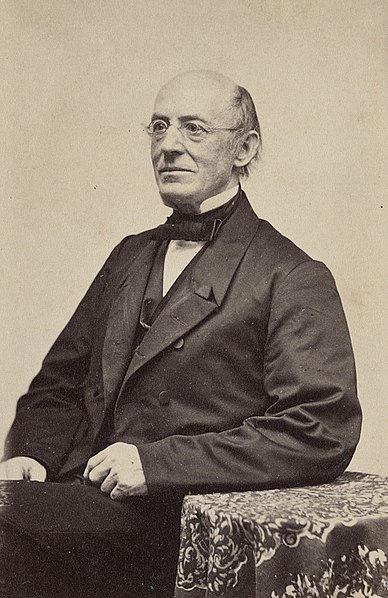 Beginning his career as a typesetter at Newburyport Herald, William Lloyd Garrison went on to become one of the most prominent anti-slavery activists and suffragists in our nation’s history.

The Massachusetts-born wrote eloquently and ardently against the institution of slavery in America. At one point in time, he even ripped a copy of the Constitution into pieces, calling the document a very pro-slavery document.

After spending the bulk part of his life calling for the immediate and uncompensented emancipation of all slaves in the country, Garrison’s dream was fulfilled in 1865 with the 13th Amendment, which abolished slavery in the United States.

In this article, worldhistoryedu.com explores 10 major accomplishments of William Lloyd Garrison – the renowned 19th-century American journalist and abolitionist who used his newspaper, The Liberator, to fiercely fight against slavery in the United States of America.

Born to immigrant parents from New Brunswick (in present-day Canada), Garrison had to fend for himself and his family right from an early age. His father’s abandonment of his family, forced him into several menial jobs, including selling lemonade and molasses candy.

At the age of 13, Garrison signed up for a seven-year apprenticeship training as a writer and editor in the newspaper Newburyport Harold. Serving under editor of the newspaper – Ephraim W. Allen – Garrison picked up invaluable skill sets and experience in editing and overall management of a newspaper. He developed so quickly that his editor allowed him to write a number of articles under the alias Aristide.

Upon completion of his apprenticeship, Garrison took a loan from Ephraim W. Allen and went on to buy a newspaper called The Newburyport Essex Courant in 1826. He renamed the newspaper Newburyport Free Press. The paper published a number of poems and anti-slavery articles written by John Greenleaf Whittier.

However, the newspaper’s support of the old Federalist Party was not favorably received by his readers. Owing to this, as well mounting debt, the paper collapsed after less than a year (in 1828) of operation.

Editor of the National Philanthropist in Boston, Massachusetts

In 1828, Garrison took up the post of editor of the National Philanthropist in Boston, Massachusetts. The paper enthusiastically defended temperance laws in the state. Between 1828 and 1829, Garrison also served as the editor of the Journal of the Times in Bennington in Vermont. It was also around this time that he fully immersed himself in the activities of the anti-slavery movement. His calling to the cause was inspired by the 1826 book Letters on Slavery, which was written by the Presbyterian minister and vocal opponent of slavery, John Rankin (1793-1822).

Coeditor of the Genius of Universal Emancipation in Baltimore

Starting around 1829, Garrison worked with tireless-working abolitionist Benjamin Lundy at the Genius of Universal Emancipation in Baltimore, Maryland.

With Lundy touring the country and giving speeches at several anti-slavery rallies, Garrison was left with handling printing and editing related activities of the paper. As time went by, Garrison began to shift away from the gradualist approach to ending slavery to a more “immediatist” approach. His writings started calling for the immediate and full emancipation of all slaves in the country. His partner Lundy held a different view, supporting the gradualists.

As co-editor of the newspaper, Garrison spent enormous effort on “The Black List” column of the newspaper. The column raised awareness of the brutalities African American slaves had to endure in captivity. His column also highlighted the abuses – beatings, kidnappings, excessive slave “breeding”, and rapes – many slaves went through while being transported across state lines by slave traders. His column helped stir a lot of emotions in the hearts of Northerners, increasing public outcry against slavery in the country.

After serving a brief prison sentence for what the state of Maryland courts considered libel against brutal slave trader Francis Todd, Garrison and Lundy decided to go their separate ways.

Vocal opponent of colonization and resettlement of slaves in Africa

Starting around the early 1820s, a number of well-meaning abolitionists and Congressmen had started proposing the idea of returning slaves to Africa. It was quite a strange proposition, considering the fact that Africa is a continent with diverse culture and ethnicities. Unbeknownst to those advocates, resettling slaves along the shores of the West African coast was not going to be a simple task.

In any case, Garrison’s initial anti-slavery activism pushed him into backing such resettlement efforts; he joined the American Colonization Society – an organization that pushed for the return of freed slaves to West Africa (particularly in present-day Liberia). Realizing the hidden agenda that most of its members had towards slavery in America, Garrison left the organization in 1830.  The actual goal of the American Colonization Society was to reduce the threat freed Black slaves posed to the institution of slavery. Majority of its members hoped that by sending those freed men back to Africa, the institution of slavery would have rid itself off the criticisms that came from those freed slaves.

Disgusted by the organization’s motives, Garrison later issued an apology for his involvement with the organization. Drawing a lot of inspiration from the speeches and works of abolitionist and Black educator William J. Watkins, Garrison would go on to champion the immediate abolition of slavery.

Following his establishment of The Liberator, Garrison joined forces with a number of anti-slavery activists to establish the New England Anti-Slavery Society in 1832. The organization, which had thousands of members in its first few years, campaigned extensively in a bid to abolish slavery. Garrison encouraged his fellow members to also allow women play key roles in the activities of the movement. For example, he actively supported the Boston Female Anti-slavery Society.

Joining forces with activists from ten states, Garrison helped found the American Anti-Slavery Society in December 1833. Quickly, the organization became known for its uncompromising stance on slavery in America, calling slavery a national sin that would undoubtedly incur the wrath of God.

Often times, his wholehearted opposition to slavery and his anti-slavery writings got him in deep trouble with mobs and slave holders. In spite of the fat bounties and rewards many southern states placed on his capture (dead or alive), William Lloyd Garrison remained resolute in the fight to end slavery in our nation.

Garrison was among the first activists to adopt the “Immediatist” view to ending slavery. He developed a number of proposals for how the freed slaves would be involved in the political, social and economic spheres of the nation. He was also one of the few activists who encouraged the active participation of women in the anti-slavery movement.

For allowing women to get involved in the fight, Garrison was tagged as extremely radical in his activism. Although he firmly stood by nonviolent and passive means of demonstrating, he was considered by many as one of the most radical antislavery activist in the United States.

After trying to incorporate women’s rights and suffrage into his activism, Garrison incurred the wrath of conservative anti-slavery activists. Relentless in his ways, Garrison published several letters and articles from the likes of sisters Angelina Grimké and Sarah Grimké in The Liberator. Called the “women question”, Garrison refused backing down on his support for women to be seen as equal to their male counterparts under the law. He was even given a seat on the National Women’s Rights Central Committee. In that position, he helped raise funds for a host of women’s causes as well.

And even though he knew that his pro-women’s rights campaign would cause the disintegration of the AAS, Garrison refused backing down; he continued giving women’s rights activist his full support.

With the guiding motto – “Our country is the world – our countrymen are mankind” – the newspaper The Liberator helped catapult William Lloyd Garrison to a legendary status within the abolitionist movement. Garrison co-foundered (with his long-time friend and business partner Isaac Knapp) the newspaper in 1831. In the newspaper’s first issue, he issued an apology for his initial gradualist approach to ending slavery, asking not just God to forgive him, but his country as well as the millions of slaves across the nation.

William Lloyd Garrison quotes | On January 1, 1831, the first piece of The Liberator contained an unequivocal statement about his stance against slavery

In addition to blasting slave holders and slave merchants, Garrison used The Liberator to properly organize the abolitionist movement in the country. After three years since its first issue (on January 1, 1831), the newspaper amassed over two thousand subscribers. Majority of those subscribers were blacks, who supported the newspaper in whatever capacity possible. Generous contributions from benefactors (including the Boston Female Anti-slavery Society) allowed Garrison to distribute the paper without any charges to Congressmen and all kinds of federal employees.

Such was its popularity among anti-slavery activists and Northerners that the newspaper made its way to Canada and Europe (in England and Scotland particularly).

In the next three decades (from 1831 to 1865), Garrison published more than 1,800 articles in The Liberator. The last issue came on December 29, 1865, shortly after the end of the American Civil War. Garrison was particularly pleased by both the Emancipation Proclamation in 1863 and the 13th Amendment to the U.S. Constitution, which abolished slavery.

Campaigned for the immediate and uncompensated emancipation of all slaves

Even though he adopted a very passive and nonviolent resistance to slavery, Garrison’s antislavery articles in the newspaper was a big thorn in the flesh of the institution of slavery in America. As a result, as well as his demand for the immediate emancipation of slaves in our country, he was considered a lethal fanatic by the South. It was a classic case of the pen being mightier than the sword.

Coupled with Nat Turner’s slave rebellion that took place in Virginia, Garrison and his newspaper came under immense criticism in the South.  He even faced a number of indictments from grand juries in the South. That same period, a $5,000 reward was placed for his apprehension and transfer to the state of Georgia.

Regardless, his support in the North continued to increase. His newspaper never relented in the publication of damning stories, reports and letters about horrors slaves faced in the South.