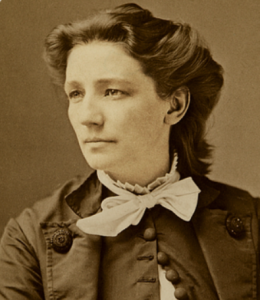 In 1870, at a time when the Reconstruction Era (1865-1877) was in its second decade, two sisters and renowned members of the women’s suffrage movement Victoria Woodhull and Tennessee Claflin joined hands to establish and operate a brokerage firm on Wall Street. By so doing, Victoria Woodhull and her sister entered the annals of history as the first women to operate a brokerage firm. Victoria Woodhull, together with her sister Tennessee, was also one of the first women to establish a newspaper in the U.S. With its first publication coming in May 1870, Woodhull & Claflin’s Weekly, as controversial as it was during its six years of existence, was an ardent supporter of women’s suffrage movement.

Woodhull got herself in the thick of things with regard to the clergyman Henry Ward Beecher’s alleged affair with Elizabeth Tilton, a married woman. In Woodhull’s November 2, 1872 publication, Mrs Tilton is said to have confessed to having an affair with the preacher Beecher. The scandal was big news at the time, and typical of the time, Woodhull, rather than Beecher, was publicly vilified for exposing the affair in the first place. She was even prosecuted for giving too much detail of the affair to the public. 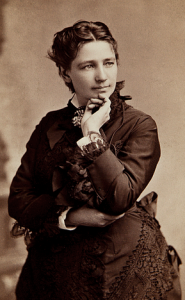 She was born Victoria California Claflin on September 23, 1838. Her place of birth is Homer, Ohio.

Victoria was the seventh of ten children of her parents – Reuben “Buck” Buckman Claflin and Roxanna “Roxy” Hummel Claflin. Of all her siblings, she was closest to her sister Tennessee Celeste Claflin (1844-1923), who was about seven years younger than Victoria.

Victoria Claflin’s father was a lawyer infamously known for engaging in snake oil schemes and other con activities.

There have been some claims from her biographers, particularly Barbara Goldsmith, that Victoria Woodhull was abused physically and sexually by her father.

Her interest in spiritualism started from an early age, as she often said that she sometimes had interactions with apparition of the ancient Greek statesman and orator Demosthenes pertaining to topics such as Free Love and women’s rights. 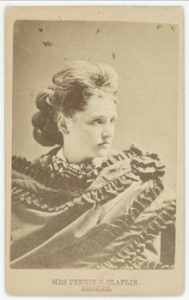 Around the age of 11, Victoria Woodhull and her family moved out of their house after her father’s arson insurance fraud was exposed. Her father had deliberately set fire to his heavily insured property hoping to get the insurance company to compensate him for his loss.

Just after turning 15, Victoria tied the knot with a family doctor named Canning Woodhull, who by the way was about 14 years her senior. The marriage took place in Cleveland, Ohio on November 23, 1853. By Canning, she had two children – Zulu and Byron.

In 1865, after 12 years of marriage, Victoria Woodhull divorced her first husband Canning Woodhull. The couple’s marriage had been rocked by years of Canning’s infidelity and alcoholism. Victoria did however keep his surname.

A year after her first divorce, she married Colonel James Harvey Blood (1833-1885), a Massachusetts-born suffragist who had served in the Union Army as an infantry commander during the American Civil War. Colonel Blood contributed a number of times to Woodhull’s newspaper Woodhull & Claflin’s Weekly.

After about 11 years of marriage to Col. James Blood, Woodhull got a divorce. A year after her divorce, in 1877, she and her sister moved to England. While giving a lecture at St. James’s Hall in London, England, she developed a liking for English banker John Biddulph Martin (1841-1897). On October 31, 1883, Woodhull tied the knot with Biddulph, much to the strong disapproval of Biddulph’s family.

Woodhull’s “Steinway Speech” and her admiration for Free Love

Historians have stated that Victoria Woodhull came to be an admirer of Free Love around the time her first husband Canning Woodhull started cheating on her. Her indulgence in Free Love was somewhat an oddity, considering the fact many married women in the 19th century were socially expected to stay with their husbands regardless of the horrible conditions in their home. Women seeking divorce from their husbands were mostly stigmatized by the society. 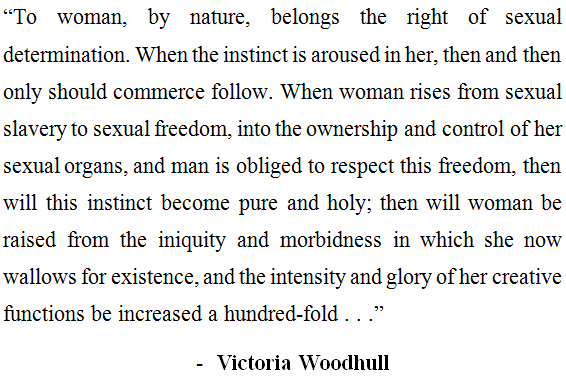 Victoria Woodhull was irritated by that phenomenon. She believed that women had the right, just as men did; to pull the plug on a marriage if/whenever they felt discontented in the relationship. Only when that happens did Woodhull believe that women would attain the freedom that they so much wanted, making them have equal status to men in the society.

She stated on numerous occasions how hypocritical the society behaves when it comes to keeping silent on married men who are unfaithful to the wives, however, that same society was quick to ostracize a woman when she has an affair outside the marriage.

Victoria Woodhull caused quite a lot of public debate after she exposed the scandalous affair between Henry Ward Beecher (1813-1887) and Elizabeth Richards Tilton (1834-1897), the wife of Beecher’s friend and former co-worker, Theodore Tilton. She exposed the affair to highlight society’s double standard between men and women when it came to infidelity. Beecher, a preacher at Brooklyn’s Plymouth Church, was a known critic of Woodhull’s free love doctrine which encouraged sexual independence and freedom for women.

On November 2, 1872, Victoria Woodhull’s newspaper, Woodhull & Claflin Weekly, published a story about an alleged affair between Henry Ward Beecher (1813-1887), a famous clergyman and known critic of free love doctrines, and Elizabeth Richards Tilton (1834-1897), a married woman. Tilton, the wife of abolitionist and newspaper editor Theodore Tilton, was Beecher’s parishioner. According to Woodhull’s publication, Elizabeth Tilton confessed to having an affair with Beecher. Woodhull’s goal was to expose the hypocrisy of Beecher who preached time and time again against free love, however, was himself a secrete practitioner of free-love doctrines.

The revelation made huge waves, becoming the most talked about issue in the country at the time. Woodhull and her team at the newspaper came under immense criticism for disclosing to much detail in her publication. Charges were even brought against Woodhull, Claflin and Col. Blood. Authorities briefly arrested them for what they claimed was an obscene newspaper. The three were tried for circulating obscene materials through the U.S. Postal Service. Ultimately, all three were acquitted.

However, the high publicity of the scandal and the trial of Woodhull and her team would spur lawmakers in Washington, D.C. to pass the Comstock Laws on March 3, 1873. Officially known as the Act for the Suppression of Trade in, and Circulation of, Obscene Literature and Articles of Immoral Use, Comstock Laws made it illegal for obscene materials, contraceptives, abotifacients and personal letters with any sexual content or information to be sent or received via the U.S. Postal Service. About century later, U.S. Supreme Court cases of Griswold v. Connecticut (1965) and Eisenstadt v. Baird (1972) made the birth control restrictions in the law null and void. 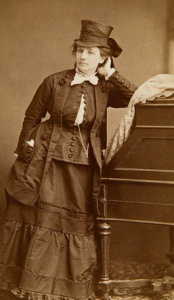 Victoria Woodhull ran for the Oval Office in 1872, more then 40 years before women had the right to vote. Even though she did not get a single electoral vote, she paved the way for women’s suffrage and women’s rights for several years to come. Image: Cabinet card of Woodhull by famous American photographer Mathew Brady

The following are six of Victoria Woodhull’s most significant accomplishments:

In 1874, Luther C. Challis pressed charges against Woodhull, Tennessee Claflin and Col. James Blood. The trio had accused Cahallis of seducing two young girls. The jury did not find them guilty.

Beginning around 1875, she started leveling criticisms against Spiritualism, calling spiritualists frauds. It was also stated that she made a U-turn on free love, writing many articles in support of marriage and many other Christian values.

Woodhull was a member of the International Workingmen’s Association (also known as the First International). The organization, which included socialists, communists, anarchists and trade unionists, was founded in England.

Victoria Woodhull was arrested by U.S. Federal Marshals just a few days before Americans went to the polls in November 1872. Woodhull’s sister Tennessee and her husband Col. Blood were also arrested. They were charged with spreading obscene contents (i.e. their newspaper publication of the affair between preacher Beecher and one of his married parishioners) through the U.S. Postal Service.

At the 1872 presidential election, she did not get any electoral vote. That year’s election was won by incumbent U.S. president Ulysses S. Grant.

Woodhull’s newspaper was the first newspaper in the United States to publish the Communist Manifesto by Karl Marx and Frederich Engles.

In 1997, American feminist journalist and author Naomi Wolf and her associate Margot Magowan established the Woodhull Institute for Ethical Leadership.

The Woodhull Sexual Freedom Alliance was founded in 2003 in Victoria Woodhull’s honor.

Other notable accomplishments of Victoria Woodhull