Here is everything that you need to know about the Egyptian god Montu, a Theban war deity most revered for aiding ancient Egyptian pharaohs in securing victories in battles. 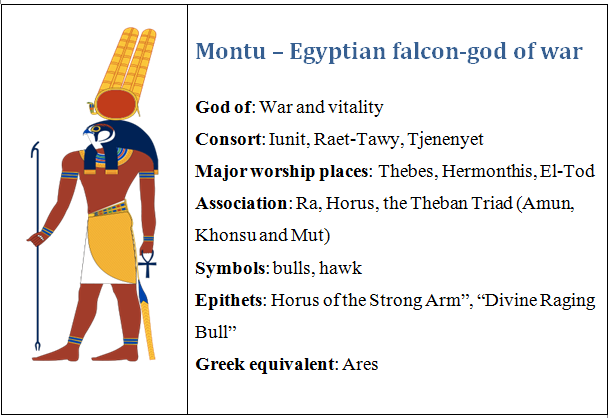 The name of the Egyptian god Montu evokes a meaning of “Nomad” in Egyptian hieroglyphs. The god’s name has also taken different variations, including Menthu, Montju, and Mont.

Ancient Egyptians believed that Montu was a very ancient god who became one of numerous manifestations of the Egyptian sun god Ra. As a result, it was not uncommon for Egyptians to sometimes refer to him as Montu-Ra.

Unlike Ra, however, Montu was said to have a knack for wanton destruction and carnage. He therefore could be seen in the same light as Sekhmet, the goddess of destruction who was also associated with Ra.

Montu’s family of gods was generally Theban deities. For example, the Theban goddesses Iunit and Tjenenyet were often referred to as his consorts. At some point, the goddess Raet-Tawy, the female manifestation of Ra, was seen as Montu’s consort.

Over time, Montu came to be revered as a powerful warrior god, a deity Egyptians implored to unleash venom on the adversaries of Maat (the Egyptian principle of truth and order) and the forces of evil.

Montu also had the ability to imbue in Egyptian commanders and pharaohs courage and strength in order to vanquish the enemies of Egypt on the battlefield.

In battles, it was believed that Montu wielded powerful weapons such as his curved sword, bow and arrows, and knives. He also has a spear that he used to take down his enemies.

One of the patron deities of the city of Thebes

The Middle Kingdom era (c. 2040 – c. 1640 B.C.E) witnessed the elevation of Montu to supreme god of the Egyptian pantheon. Over time, however, this honor was given to different Theban god known as Amun.

A number of centuries before the Theban Triad (i.e. Amun, Mut, and Khonsu) gained widespread worship in Thebes,  Montu was considered the chief patron god of the city.

Many of the rulers of the 11th Dynasty revered him as the protector of not just their dynasty but the entire city of Thebes. This explains why a number of those rulers, including Nebhepetre Menthotep II, Sankhkare Mentuhotep III, and Nebtawyre Mentuhotep IV, had the name of the god in their names.

Many of those 11th Dynasty pharaohs believed that Montu was the reason why they secured victories over their enemies. He was also credited with bringing the two lands of Egypt – Lower and Upper Egypt – at the end of the First Intermediate Period (c. 2181 BC- c. 2055 BC).

Montu’s extraordinary strength and thirst for war meant that he was seen in some spheres of the Egyptian society as a raging bull. It was believed that he took the shape of a sacred bull known as Buchis, a white bull with black snout.

The above explains why Montu was sometimes depicted with a bull head by Egyptians in the Late Period (c. 665 BCE – c. 332 BCE).

Another very popular depiction of Montu saw him appear with a falcon head, almost similar to the god Horus. Egyptians often associated the falcon to the sky. As it was common practice for depiction of Egyptian gods and goddesses, Montu can be seen holding the ankh (Egyptian symbol of life) and the scepter/staff (symbol of power and royalty).

It comes as no surprise that Montu, a falcon-headed deity, was associated with Horus, another falcon-headed god. Due to this association, Montu came to be known as “Horus of the Strong Arm”, a symbolic reference to the war-like traits of Montu.

Montu and the sacred bull Buchis

Worship of the sacred bull Buchis, i.e. one of the manifestations of Montu, was common in Armant (also known as Hermonthis in Greek), a region 12 miles south of the city of Thebes.

Ancient Egyptians would only chose a bull that had a black face and a white body to represent the war god Montu. Upon its death, the remains of the bull would then be mummified and given a funerary right befitting of a god or an Egyptian pharaoh.

Archaeologists have also unearthed evidence to show that there was a thriving bull cult in honor of Montu in Upper Egypt perhaps in the Middle Kingdom Era (c. 2055 – 1650 BCE).

Egyptian generals and warrior kings had the habit of associating themselves with Montu. Those men were known as the “Mighty Bull” or the “Son of Montu”. For example, 18th Dynasty pharaoh Thutmose III, the son off Thutmose II, described himself as “Valiant Montu on the Battlefield”.  Similarly Pharaoh Amenhotep III, Thutmose III’s   great-grandson, took the epithet “Montu of the Rulers”,

In addition to having epithets like “born of Ra”, 19th Dynasty Pharaoh Ramesses II (also known as Ramesses the Grea) was called “Montu of the Two Lands”.

Similar to many ancient Egyptian gods, Montu had a number of epithets, including “Horus of the Strong Arm” and “Divine Raging Bull”.

Montu Egyptian god’s templar complex of Medamud had important renovations over the years, including during the New Kingdom era, the Ptolemaic and Roman period.| Image: Ruins of the Temple of Montu in Medamud

Situated in Medamud, the Temple complex of Montu was one of the most famous worship centers of Montu during the 12th Dynasty. It’s been stated that the complex was built by Pharaoh Senusret III (c. 1878 – 1838 BCE). The temple complex also housed the sacred bull Buchis. Other popular worship places of Montu include Armant (ancient Iuni).

The Temple of Montu in Armant (ancient Iuni) was also another popular place for the worship of Montu.  The temple remained standing until 1861, when local authorities in the region used the blocks from the temple to construct a sugar factory.