The Liberty Tree, an elm tree, is considered one of the most famous symbols of the American Revolution. Situated near the central public park in downtown colonial Boston, Massachusetts, the Liberty Tree witnessed the early years of protests against the British government over its tax policies across the American colonies.

It served as the meeting place for the planners (i.e. from the Loyal Nine) of the first protests in Boston. Using darkness to veil their planning of acts of defiance (against British colonial officials), Boston’s Sons of Liberty used the large elm tree in Hanover Square as their rallying site from the mid-1760s to 1775, when the tree was felled by a staunch Crown Loyalist Nathaniel Coffin. 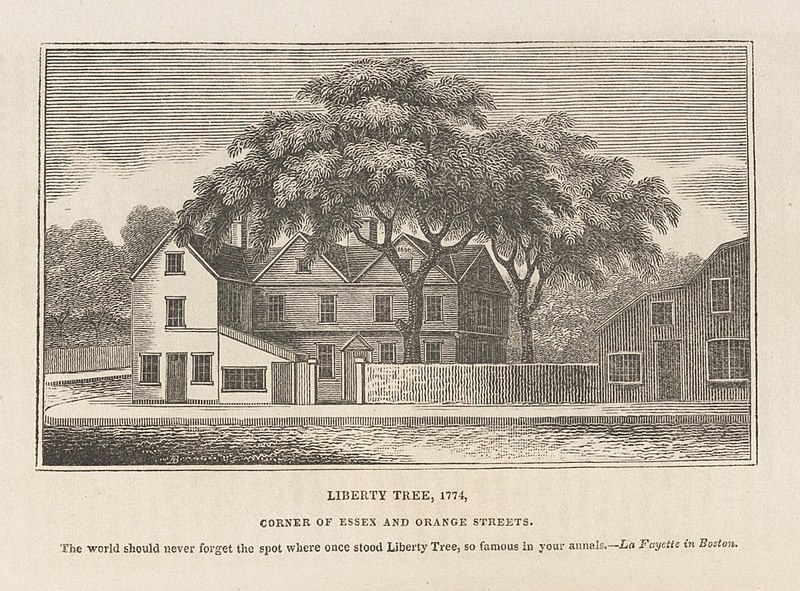 Liberty Tree history and facts | Boston chapter of the Sons of Liberty met many times under an elm tree in Hanover Square known as the Liberty Tree to carry out protests against the British government  | Image: The Liberty Tree in Boston, as illustrated in 1825

The Liberty Tree and the Loyal Nine

The Loyal Nine is most known as the precursor organization of the Sons of Liberty. The formative group of the Loyal Nine comprised nine American patriots who were mostly businessmen from middle-class families. The members were: John Avery, Thomas Chase, Steven Cleverly, Henry Bass, Thomas Crafts, Joseph Filed, John Smith, Benjamin Edes, and George Trott.

Following the passage of the Stamp Act of 1765 (by the British government), the Loyal Nine sprung to action and planned a series of defiance act in protest against the British Parliament’s direct taxes on the colonies. The members of the Loyal Nine brought on board Ebenezer Mackintosh to act publicly as the mob leader of the protests. A shoemaker, Mackintosh was skilled at rallying mob to action. 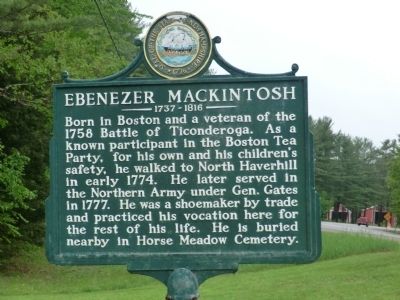 The Loyal Nine set up the Liberty Tree as the rallying place for Bostonians that opposed the Stamp Act. The act imposed on the American colonies (without any form of consultation) required them to pay tax on almost every legal document and printed paper, including deeds, court papers, newspapers, almanacs, pamphlets, and mortgages.

The first protest is said to have taken place in August, 1756 right under the Liberty Tree. During that protest, an irate crowd hanged effigy of Andrew Oliver, a senior Stamp official of the British Crown.

The protesters then placed a small devil figure inside the boot. There was also a copy of the Stamp Act and a sign that read “What Greater Joy did ever New England see / Than a Stampman hanging on a Tree!”

In another protests against the Stamp Act, the crowd, led by Ebenezer Mackintosh, hanged a British military cavalry boot (i.e. the Jackboot). The soles of the boots were then painted green. This was a clever pun to depict the two British men – Earl of Bute and Lord George Grenville – who advocated the Stamp Act.

While many radical members of the Loyal Nine/Sons of Liberty threatened to meet British officials with violence and intimidation, John Adams, a renowned Bostonian lawyer and an associate of many members of the Sons of Liberty, resisted the Stamp Act with a series of speeches, newspaper articles, essays, and court petitions.

After the Stamp Act was repealed (following months of protests and public defiance) in 1766, several people gathered under the Liberty Tree to jubilate. The crowd also celebrated by hanging flags (mostly that of the Sons of Liberty) and lanterns over the tree.

Liberty Tree history and facts | The protesters placed a sign on the trunk of the Liberty Tree. It read “This tree was planted in the year 1646, and pruned by order of the Sons of Liberty, Feb. 14th, 1766.”

Did you know: The Jackboot worn by the British officials came to be associated with Totalitarianism?

How and when the Liberty Tree was cut down

It was alleged that Loyalist Nathaniel Coffin Jr. was the man who chopped down the Liberty Tree. The event happened during the Siege of Boston (April 19, 1775 – March 17, 1776). British soldiers, led by Job Williams, and an armed group of Loyalists supervised the cutting down of the tree.

For his direct involvement in the felling of the Liberty Tree, the American Patriots vowed to punish Coffin Jr. severely.

Significance of the Liberty Tree

The tree also inspired other towns in the various colonies to name their own trees of liberty. For example Annapolis in Maryland, Newport in Rhode Island and Charleston in South Carolina all had their own trees of liberty. The liberty tree planted in Acton, Massachusetts stood until 1925. All in all, the name Liberty Tree became a very important symbol of the American Patriots and the eight-year Revolutionary War.

The Liberty Tree served as a rallying point where speeches were given by influential Boston Patriots and later the leaders of the Sons of Liberty. 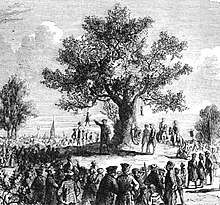 Boston’s Liberty Tree inspired many people to join the Patriots’ cause and fight in the American Revolutionary War a decade later | Image: The Colonists Under Liberty Tree, Cassell’s Illustrated History of England, 1865.

Other interesting facts about the Liberty Tree

Below are 8 important facts about the Liberty Tree of Boston, Massachusetts: 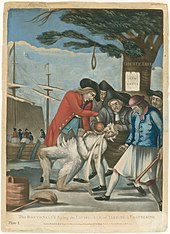 The place around the tree came to be known as the Liberty Hall.

Following British troops withdrawal from Boston in March, 1776, a pole known as the Liberty Pole was erected by the Patriots in August that year near the Liberty Tree. Flags of the Patriots were often flown over the tree, inviting people to meet under the tree.

In 1775, Thomas Paine, the political activist and author who authored Common Sense (1776) and the American Crisis, wrote a lyrical poem about the Liberty Tree.

The Liberty Tree also served as an important rallying point for colonists who opposed the Tea Act in 1773. John Malcolm, a known Crown Loyalist, was bundled up by the protesters and tarred and feathered under the Liberty Tree. After completely humiliating Malcolm, the protesting colonists forced him to resign his position.

In a clear act of mockery, British soldiers humiliated a man called Thomas Ditson. They tarred and feathered Ditson before asking him to walk several times around the tree.

Boston’s Liberty Tree appeared in one of Paul Revere’s political cartoon engravings: A View of the Year 1765.

After the British colonial authorities (the British Royal Navy) seized John Hancock’s ship, protesters thronged to the Liberty Tree in solidarity with the influential American merchant and Patriot. The protesting Patriots seized the boat of customs commissioner’s and then dragged it to the tree where a mock trial was held. The boat was later burned that day.

The Liberty Tree served as the rallying point for opponents of the Tea Act of 1773.