How and Why Ancient Greece Fell 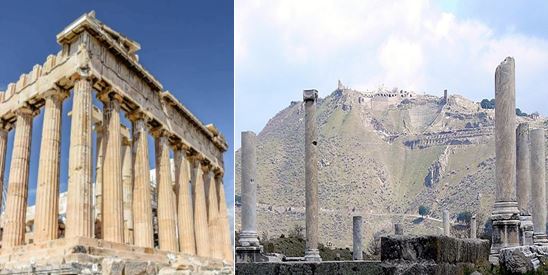 Ancient Greece’s title of being one of the most influential civilizations in world history did not come easily. For several centuries, the Greeks dominated not just the Mediterranean but also other parts of the world. They gave us numerous scientific, social and cultural inventions, including democracy, histography, the Olympics, geometry, philosophy, theatre and medicine.

And as it is natural with any civilization, the demise of ancient Greece came as a result of a number of factors. Ancient Greece was nudged off by the more powerful and vibrant Romans, who ended up incorporating ancient Greece into their territory.

Ancient Greece as a civilization and not an empire

In the truest sense of the word, ancient Greece was never really an empire or a country; rather it was a loose coalition of independent city-states that shared so many cultural and religious beliefs. It was only in the modern times (i.e. in 1821) that Greece did eventually become a country. Although, not united per se, the ideas and inventions that were produced by the ancient Greeks ended up becoming the foundation of our Western civilization.

A quick look at the timeline of ancient Greece shows that the history of the civilization goes all the way back to around 1100 BCE, a time period historians often refer to as the Greek Dark Ages. Following that period was the Archaic Period, which started around 776 BCE and ended in 500 BCE. Then there was the famous Greek Classical Period (480 BCE – 323 BCE) which witnessed tremendous burst of ideas and scientific innovations. This period could boast of the philosophers such as Socrates and Plato, and the famous Greek playwright Aeschylus. Finally, there was the Hellenist Period, which spanned from 323 BCE to 31 BCE. Hellenistic Greece began following the death of Alexander the Great, the famous conqueror and king of Macedonia.

Not until Alexander Great, ancient Greek city-states often busied themselves either fighting amongst each other or loosely banding together to ward off the Persians. It has been estimated that there were several Greek city-states; however, the most prominent of them were Athens and Sparta. Even during the reign of Alexander the Great and his father Philip II of Macedon, Greeks never really felt like being part of unified empire. Alexander the Great, a huge admirer of Greek culture, was crucial in spreading Greek culture and ideas to other parts of the Mediterranean, as he went on several conquests in the region.

Factors that led to the fall of ancient Greece 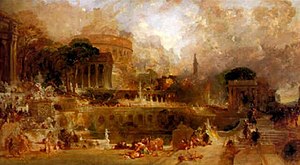 In 146 BCE, the Roman army completely destroyed the Greek city-state Corinth and its Greek allies in the Achaean League | Image: The Destruction of Corinth, by Thomas Allom

The following are the 4 major factors that caused the fall of ancient Greece:

The loose coalition that existed amongst Greek city-states

Right from its beginning ancient Greece was always made up of city-states that had their own independent governments. For most of the time, these city-states locked horns with each other, fighting for dominance in the region. For example, it was not uncommon for the very militrialistic city-state of Sparta to spar with the quite liberal and intellectual (philosophical) city-state of Athens.

Individual city-states also suffered from the constant threat of the mighty Persian Empire in the east. The most known of those clashes came in the form of the Persian Wars, which saw a series of Persian attacks from 492 BCE to 449 BCE. Examples of some legendary battles fought in the Persian Wars include Marathon (490 BCE), Platea (479 BCE), and Themopylae (480 BCE). Although, the Greek city-states banded together to quell the Persians, the effects of the war weakened the influence of Greeks in the region.

Basically the combination of those two factors, as well as others, allowed for the decline of the ancient Greek civilization.

Read More: Major Causes and Historical Importance of the Battle of Marathon

The Death of Alexander the Great in 323 BCE 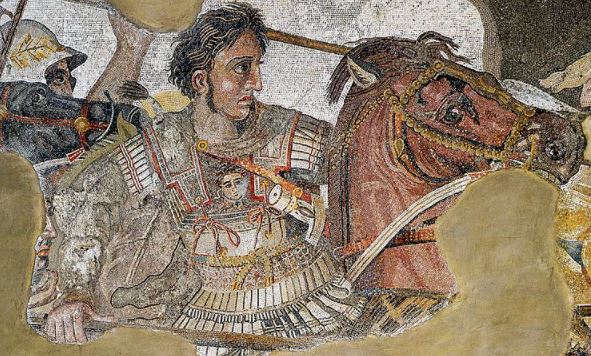 In the decades and centuries that followed after the death of Alexander the Great, the various Greek city-states that were on the verge of uniting became more divided. Owing to the sudden death of the 32-year-old military genius, a successor could not be named. Alexander’s generals went ahead and sliced up the empire, leaving each area to be ruled by a general. So, for example, Alexander’s conquered territories in Egypt came to be ruled by the Ptolemaic dynasty.

Alexander the Great’s death in 323 BCE marked the end of the Classical Greek period, ushering in the Hellenistic Period. During this time, attention started moving from traditional cultural hubs such as Athens and Sparta to places like Alexandria (in Egypt) and Ephesus (in Turkey).

Did you know: The military genius and leader Alexander the Great went on a conquering spree that saw him march as far as India?

The Rise of Rome

The inability of ancient Greek city-states to unite was not the only reason why ancient Greece fell. Ancient Rome’s increased influence in the region, which started around 200 BCE, ended up being a huge factor in the fall of ancient Greece. A very militaristic and prosperous Rome made it their goal to conquer all of Greece. Fearing the growing threat of Rome, many Greek city-states did not hesitate to form an alliance with Carthage in waging war against Rome in 215 BCE. However, Rome proved to be a far superior force and defeated the Greeks.

In 146 BCE for example Rome (under the command of Lucius Mummius) defeated a coalition of Greek armies at the Battle of Corinth. The sheer devastation of the Greek city-state of Corinth scared the living hell out of the remaining Greek city-states, compelling many of them to quickly push for an alliance with Rome. As a result, Rome became the dominant force in the Mediterranean.

Not only did Rome absorb the various ancient Greece city-states into their empire, the Romans also kind of appropriate a great deal of Greek culture, including ancient Greek religious beliefs and gods. So, for example the king of the Greek pantheon of gods Zeus became Jupiter in Rome; and the Greek god of war Ares became Mars in the pantheon of Roman gods. 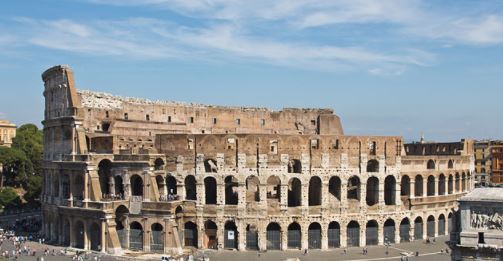 Ancient Greece fall | Rome’s meteoric rise in the Mediterranean was too much for the various Greek city-states to handle |Image: The Colosseum in Rome

Revolt of the lower classes in Ancient Greece

As seen in many empires and civilizations, internal rife within the various Greek city-states ended being a significant factor in the fall of ancient Greece. The rife was primarily caused by a class war, which saw the lower classes rise up against the upper classes and ruling elites.

Often times those uprisings allowed for brutal rulers to cease power. And with that came more chaos and uprisings. As a result of those internal uprisings, the Greek city-states became vulnerable to an external invasion.

Other facts about Ancient Greece and its fall 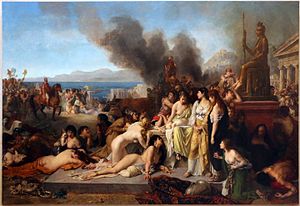