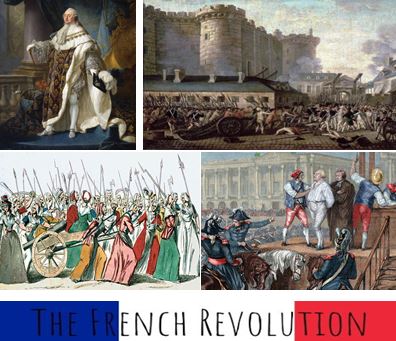 Causes of the French Revolution

From 1789 to round about 1799, the French Revolution ripped through France, causing unimaginable chaos, terror and deaths. And even to this day, the revolution ranks as one the most significant periods of human history. What caused the French to part ways with absolute monarchy and the feudal system in the bloodiest of ways? In order to fully understand what actually transpired back then we present to you the 9 most significant causes of the French Revolution.

The Crippling Effect of the Three Estates System

18th century France was a society with three main social classes called the Tiers État (Estates of the Realm) in French. These social classes comprised the clergy, the nobility, and then the commoners.

The clergy were regarded as the First Estate, and they accounted for about half a percentage of the total population of 25 million. The Second Estate, the nobility, amounted to about 1.5% of the French population. The commoners, who were considered the Third Estate, formed the bulk of the population. It is believed that the commoners numbered staggering 24.5 million – that is at least 98% of the population.

The social system, i.e. the “Ancien Regime”, back then was purposely designed to leave the commoners speechless, powerless and penniless (“livreless”) while the king and the two other estates held on to absolute political and economic power.

Although the commoners were represented in the Estate-General (a parliament-like body that rarely met), the voting system was skewed in favor of the first two estates. What this meant was that the Third Estate had no say in the affairs of the country, even though they formed the bulk of the population.

In the nutshell, the Three Estate System was a ticking time bomb; and once hardships and hunger got severe, it was inevitable that the commoners were ultimately going to uproot the monarchical system of governance.

Excessive Taxes on the Third Estate 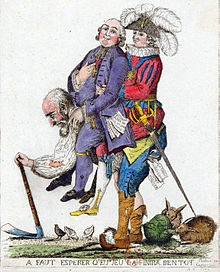 Third Estate (commoners/peasants) carried all the tax burden in France

In spite of the first two estates – the clergy and the nobles – owning significantly more wealth than the remaining commoners combined, the burden of taxes fell only on the commoners. Take the example of the amount of wealth the clergy owned. 18th century French clergy had about 10% of the properties and lands in the country. However, they only accounted for 0.5% of the population. To make matters worse, neither they nor the nobles paid a single tax.

Once all these monies have been collected, the first two estates used the funds to sustain their lavish lifestyles. Clearly the “Ancien Regime” in 18th century France was a system that was bound to come crumbling down.

The rise of the Bourgeoisie

The French Bourgeoisie comprised the upper echelons of people in the Third Estate. These people were largely professional men and women with vast amounts of intellectual reasoning. They included lawyers, doctors, teachers, businessmen, writers, and philosophers.

As the economic and political situation got increasingly unstable, the French Bourgeoisie started to question the established traditions and norms of the society. They had also accumulated reasonable amount of wealth and would go on to become a real threat to the first two estates. They desired one thing only – the demise of the first two estates.

The bourgeoisie reasoned that one’s lot in this life should be based on his efforts put in and not based on where he/she was born.

The influence of Enlightenment philosophers of the era

Another major cause of the French Revolution was the intellectual and philosophical ideas that swept across Europe in the 18th century. Many of these ideas were churned out or based on the works of Enlightenment Era philosophers such as: John Locke, Jean-Jacques Rousseau, Baron de Montesquieu, Voltaire, Denis Diderot, Immanuel Kant, and a few others.

The influence these philosophers had on the French society was absolutely crucial. For example, the August 4 Declaration of the Rights of Man and of the Citizen (Déclaration des droits de l’homme et du citoyen) took its roots from the philosophers such Jean-Jacques Rousseau and John Locke.

In the case of Rousseau, the Genevan thinker (1712-1778) asked for the abolition of the class system, i.e. a society that was equitable and not based on one’s birth rights. Similarly, the French Revolutionaries were influenced by the “consent of the people” ideas of English philosopher John Locke.

All of those philosophical and political ideas of Enlightenment philosophers gradually challenged the absolute authority of French King Louis XVI and the French clergy.

Causes of the French Revolution | Disenfranchised and aggrieved Third Estate

Owing to the rise of the French bourgeoisie and the eruption of Enlightenment ideas, the Third Estate started to agitate for a society that would be built on reason and not divine authority.

All of a sudden, they got angry at a system that gave them the same number of votes as the two other states, even though they made up 98 percent of the population. The commoners were fed up with years and years of the two other estates outvoting them. They had had enough of carrying the tax burden.

Several cries for equal representation at the Estate-General (les états généraux) was met with dead silence from King Louis XVI. Some of Louis’ ministers even tried to convince the nobility and clergy to start paying some amount of the taxes, however, neither of them budged to those political and judicial reforms.

In their pursuit of equal representation, the third estate broke away from the Estate-General and went on to form the National Assembly on June 17, 1789. They were bent on forcing those reforms on the ruling class. They believed that removing feudalism and the monarchy would bring to an end the gross exploitation of the Third Estate. And so, on June 20,1789, the members of the National Assembly took the Tennis Court Oath (“Serment du jeu de paume”) to uphold ideas that granted equal representation across the French society.

French kings Louis XV and Louis XVI were two monarchs of the time that never passed on the chance to go to war with their arch enemy, Great Britain.

France’s indebtedness began around the reign of Louis XV, the grandfather of Louis XVI. From 1756 to 1763, France and Great Britain locked horns in what eventually became the Seven Years’ War. The two European powers were in a bitter war over territorial control of North America. The war was an extremely expensive exercise for France. By the time it was over, France not only lost a bulk of its North American territories (as well as a number of them across the globe), it also had stacked up a mountain of debts. It has been estimated that Louis XV spent over one million French Livres on the war.

Fast forward to the reign of his grandson, King Louis XVI, and one is left to ponder how absurd it was for the French to engage in years and years of mindless and expensive struggles with Great Britain. As at time that Louis XVI inherited the crown in 1774, the French government had 8-12 billion livres of debt. Ignoring the sound advice and counsel of his finance ministers, Louis XVI proceeded to dig his country into further debt by bank rolling the Americans during their fight for independence from Britain. The king extensively borrowed in order to invest in the navy and the military. He was perhaps obsessed with avenging the defeat that France suffered during the Seven Years’ War. France went on to spend about 1.066 million French Livres during the American Revolution.

Ultimately, France’s coffers ran dry. The highly ineffectual king imposed further taxes on the commoners who were already suffering by then. And so, the people rose against him.

About two decades of bad harvest and famine

In June 1783, the Laki volcano in Iceland erupted, spreading thick plumes of ash all across Europe. The ash-covered skies created severe winter conditions across the continent. France was hit the hardest and her planting seasons were disrupted. This led to famine and drought. Prior to Laki eruption, the country was already grappling with some semblance of drought-like conditions for well over a decade.

The resultant famine caused prices of staple commodities to go through the roof. Once again, the peasants and the common folks took the brunt of France’s misfortunes. The two other classes turned a blind eye to the blight of the commoners. To add insult to injury, the French government continued to impose intolerant taxes on the commoners.

A loaf of bread, for example, cost about 90% of the daily wages of the commoner at the time. Starvation and hardships became the order of the day for every French peasant.

Deregulation of the grain economy

The famine and starvation during the latter part of the 18th century were made worse due to Louis XVI’s deregulation of the French market. Before the famine, France had an economy that could be described as a “moral economy”. The government was heavily involved in ensuring the speculative moves did not cause artificial shortages, which in turn forced prices to go up. For instance, there was the “grain police” that went across the country enforcing those government regulations. In times of famine and drought, these regulations somewhat mitigated the effects.

With the abolishing of the grain police and institution of a laissez faire economy, the French peasants were left to fend off on their own. Louis’ “physiocrats” and Laissez Faire economists argued that the “invisible hand” of demand and supply would help correct the situation. However, their plans spectacularly backfired. The price of bread kept increasing at a staggering rate, compounding the already fragile political and social situation in France.

Whereas other European countries mitigated the crisis by relying on potatoes, the French had no history of growing potatoes. They preferred grains because it was easier to store and transport.

From 1774 to the year that the Revolution broke out, France grappled with the Flour War of 1775; the Réveillon Riots in 1789; and the Parisian Women March on Versailles in October 1789. 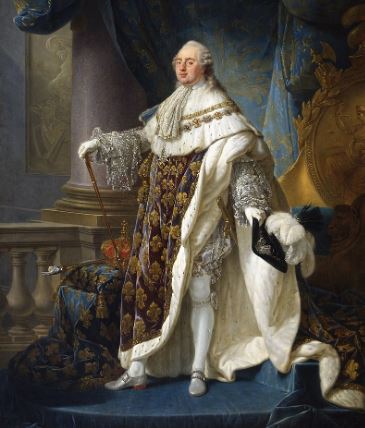 Upon the death of his grandfather Louis XV on May 10, 1774, Louis XVI inherited the throne. The 20-year-old monarch was largely considered as grossly incompetent and far from an effective leader. He let his courtiers live a lavish life while his people wallowed in hunger and suffering. His wife, the extravagant Queen Marie Antoinette, was thoroughly despised by the French commoners. It is believed that she exercised no restrain when it came to plundering the country’s resources. The queen carried out large scale and costly renovations at the Versailles Palace. Funding of such unnecessary and expensive projects came directly from the sweat of the commoners.

Resentment continued to grow against the incompetent and aloof monarch due to his inability to halt his excessive spending. And there was no means of holding the king and his courtier to accountable for their actions. The king was answerable to no one, he was the God’s representative on earth. Therefore, the plundering of state’s resources continued, angering many enlightened thinkers at the time.

When Louis eventually woke up to the gravity of the nation’s dire financial woes, he tried to install some reforms, however, it was too little and too late. The People had had enough King Louis XVI and his wife Marie Antoinette. Anti-monarchist sentiments grew large and large by the day, culminating in the French Revolution in 1789.

Here are a few more and related causes of the French Revolution: