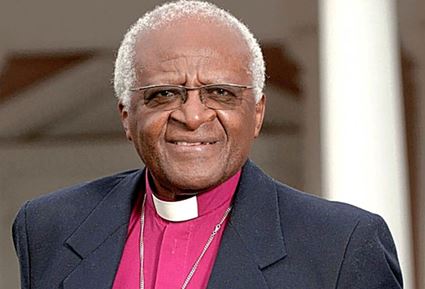 South African Anglican cleric and 1984 Nobel Peace Prize winner, Desmond Tutu, was one of the most prominent persons to ever hail from the African continent. His unflinching commitment in resisting the apartheid regime in South Africa etched him into the annals of history. Additionally, he is most famous for being the first Black African to become Anglican Archbishop of Cape Town. Here is a quick look at the key facts and timeline of Desmond Tutu – an anti-racial segregation icon and human rights activist.

Cause of death: Cancer

Nicknames: The Arch; Baba; and Boy (as a child)

October 7, 1931 – Desmond Mpilo Tutu is born to parents – Allen Dorothea Mathlare (Aletta Tutu) and Zachariah Zelilo Tutu. His mother, Allen, was a Motswana while his father was from Xhosa tribe.

1936 – Attends a Methodist primary school at Tshing. From there, he proceeded to the Swedish Boarding School in St Agnes Mission.

1951 – Wins a scholarship to study at Pretoria Bantu Normal College in 1951. After college, he secures his Transvaal Bantu Teachers Diploma 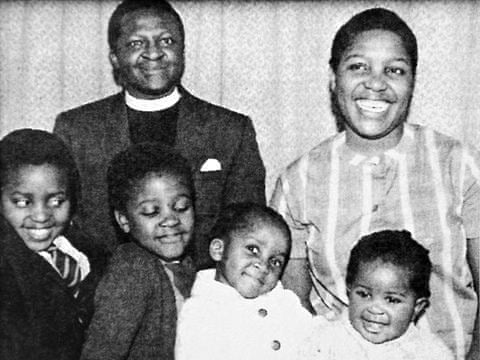 1953 – Tutu and his wife Nomalizo resign from the educational sector due to the Bantu Education Act that was enacted by the National Party of South Africa. The act was in every sense of the word epitomized the apartheid regime. It encouraged further racial segregation in the educational sector.

1954 – Works as an English tutor at Madibane High School. Then, in 1955, he proceeds to teach at Krugersdorp High School.

June 1955 – Tutu marries Nomalizo Leah Shenxane at Krugersdorp. Even though he was an Anglican, Tutu had a Roman Catholic wedding.

1956 – Gains admission to St Peter’s Theological College at Rosettenville, Johannesburg. While there, he wins a prize in an annual essay competition.

December, 1960 – Tutu is ordained as an Anglican priest at St. Mary’s Cathedral. The priest that ordained Tutu was Edward Paget. After his ordainment, he begins work as an assistant curate in St Alban’s Parish. Two years later, he is called to St Philip’s Church in Thokoza.

1962 – After funds were raised by the Anglican Church, in partnership with the International Missionary Council’s Theological Educational Fund (TEF), Tutu is tapped to further his education at King’s College London, England. In addition to his usual curricular, Tutu studies Hebrew.

1967 – Begins teaching at the Federal Theological Seminary (Fedsem) in Eastern Cape. He becomes the first Black African to do so. A few years later, he leaves Fedsem to take up a teaching position at the University of Botswana, Lesotho and Swaziland (UBLS) in Roma, Lesotho.

1972 – Appointed director of the Theological Educational Fund (TEF) in Africa. The position afforded him the opportunity to visit several African countries, assessing grants to institutions and students. He visited countries like Zaire (present day Democratic Republic of Congo), Nigeria, Kenya, Uganda and host of other countries.

1973 – Champions black theology – a practical approach to dealing with real issues related to the life and death of the black man. He merged African-American theology with African theology.

August, 1975 – Appointed dean of St Mary’s Cathedral, Johannesburg. By taking up the position, he became the first black African to hold the office. While in office, he campaigned for the ordination of women priest. He was a big advocate for gender equity and equality of opportunities.

March, 1976 – Tutu gets elected as the Bishop of Lesotho, becoming Bishop of St Mary’s Cathedral.

May, 1976 – Pens a letter to then South African Prime Minister Voster, asking him to bring an end to apartheid in South Africa.

September 1977 – Attends the funeral of anti-apartheid activist and leader of the Black Consciousness Movement Steve Biko.  Biko died while he was held by the police.

Head of the South African Council of Churches (SACC)

March, 1978 – Appointed the Secretary-General of the South African Council of Churches (SACC), replacing John Thorne. Also in this position, Tutu became the first black African to hold the office.

May, 1980 – Tutu is arrested and fined, along with Joe Wing, for leading a march against the illegal arrest of John Thorne, a former General-Secretary of the SACC.

1984 – Wins the Nobel Peace Prize, earning himself prize money of $192,000. He donated the money to family members, SACC staff, and some educational charities.

February, 1985 – Becomes the Bishop of Johannesburg. The sixth person to occupy the position, Tutu becomes the first Black African to hold that office.

1985 – Plays a crucial role in mediating between angry black South Africans and the government. The government had imposed state of emergency in most parts of the country, enraging the blacks further. Amidst all of that he always tried to use nonviolent means to get the message across. He called for nation-wide strikes; he marched; and he called for fasting and praying.

February, 1986 – Obtains two-thirds of the vote to become the Archbishop of Cape Town. Again, he makes record by becoming the first Black African to get elected to the office. His enthronement ceremony, which was at the Cathedral of St George the Martyr, was graced by more than 1,300 people.

1986 – Tutu becomes the Archbishop of Cape Town. As archbishop, he was the head of the church in five southern African countries – South Africa, Botswana, Swaziland, Lesotho and Namibia.

February 1988 – Mediates the conflict between Black protesters and authorities. Kind courtesy to his efforts, as well as that of Boesak and Stephen Naidoo’s, the issue was prevented from escalating further. 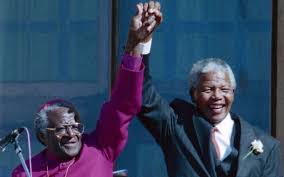 In 1984, Desmond Tutu won the Nobel Peace Prize for his amazing work to bring down the racist apartheid regime in South Africa. This made him the second South African to ever win the award, behind Chief Albert Lutuli. Image: Desmond Tutu (left) and Nelson Mandela

1994 – Attends Nelson Mandela’s presidential inauguration ceremony. Mandela made history by becoming the first black African to become the president of the South Africa.

September 1995 – Tutu becomes one of the seventeen commissioners on the Truth and Reconciliation Commission (TRC). He was picked by Nelson Mandela to chair the commission. The final report was presented to Nelson Mandela in October 1998.

1995 – Appointed the chairperson of the Truth and Reconciliation Commission of South Africa. He was tapped by then-president of South Africa, Nelson Mandela.

1996 – Tutu brings his time as archbishop of Cape Town to an end. He is however given a new title, Archbishop emeritus.

June, 1996 – Retires from his position as archbishop of Cape Town. His successor was Ndugane.

1997 – News of his diagnosis with prostate cancer emerges. Tutu undergoes treatment in the United States.

1998 – 2000 – Tutu becomes a visiting professor of theology at the Atlanta university, Emory University.

March, 2003 – After about 8 years, he submits the final report of the Truth and Reconciliation Commission to then-South African president, Thabo Mbeki.

July, 2007 – Along with Nelson Mandela, he forms The Elders – a group of distinguished and old statesmen from around the globe. The goal of the group is to deliberate on issues of global significance. The group included the likes of Kofi Annan (Former U.N. Secretary General), Jimmy Carter (Former President of the United States), Ela Bhatt , and Mary Robinson.

Read More: 10 Greatest African Leaders of All Time and their Accomplishments

September, 2007— Along with other members of the Elders, Tutu heads to Darfur, Sudan in search for a long-lasting peace in the country.

July, 2009 – US President Barack Obama awards Tutu with the 2009 US Presidential Medal of Freedom.

October, 2011 – In its bid to not incur ire of China, South African government refuses to grant a visa to the Dalai Lama. The Tibetan Buddhist leader intended to pay Tutu a visit during his birthday celebrations.

October, 2011 – “Tutu: The Authorised Portrait” gets published. It was published on Tutu’s birthday, 80th birthday. The book was co-written by Mpho – Tutu’s daughter – and Allister Sparks. Book delves into the lives and stories of people like the Dalai Lama, Nelson Mandela, Bono, and among others.

October, 2012 – The Mo Ibrahim Foundation presents to Tutu a one million-dollar award for all his efforts (“speaking truth to power”) in fighting for racial equality and civil rights.

2013 – The Desmond and Leah Tutu Legacy Foundation is established in Cape Town.

2016 – A recurring infection forces Tutu to be admitted to a South African hospital.

October 6, 2016 – Pens down an op-ed in The Washington Post. In the op-ed, Tutu voices his unflinching support to civil rights and racial equality. He also advocates that people should be given the right to die with dignity.

December, 2019 – Tutu receives treatment for some health infections. He was admitted on December 4, 2019 and was released five days later.

Fact Check: Our quest for well-written and accurate histories is unflinching. However, if you see something that doesn’t look right, please leave a comment below. Alternatively you can contact us via our email.