Born on January 15, 1929, Martin Luther King Jr. (MLK) was an outspoken African American who gained national recognition as a civil rights activist. He was also a religious leader who spent a great chunk of his life organizing peaceful protests to seek equal treatment of all races, especially black people across the United States. Despite his resort to nonviolent demonstrations as the means to resist the racially segregated America, Luther King was shot dead in 1968 by James Earl Ray. In the article below, we shall find out the circumstances surrounding the gruesome assassination Martin Luther King Jr. – a 1964 Nobel Peace Prize Laureate.

By the middle of 1950, King’s campaigns and fight for civil rights had made him a number one enemy of white supremacists. He began to receive death threats. Luther King survived a knife attack on him in 1958. After encountering the dreadful attempts on his life, King continued to teach that nothing (including murder) could stop him from fighting for what is right. After President F. Kennedy was brutally assassinated in 1963, Martin Luther King Jr. prophesied to his wife (Coretta Scott) that the same thing would happen to him. He described human society as being a sick one.

In February of 1968, Luther King Jr. went to Memphis – a city in Tennessee, US. The visit was part of his efforts to support black American workers that had embarked on a sanitation strike. The strike was meant to call for fair wages and good working environments. Black sanitation workers were underpaid as compared to their white counterparts. To add fuel to fire, two African American workers died in a truck used for compacting garbage.

Luther King partook in the peaceful protests which later turned rowdy. He rescheduled a new date for the march to April. It is alleged that King’s flight to Memphis was deliberately delayed because of a bomb threat. His enemies were prepared to kill innocent citizens just to get him dead. However, Luther King was safe that day.

In one of his emotional speeches titled “I have been to the mountaintop”, Luther King recollected that after his miraculous survival from the stabbing incident, his doctor shared a shocking health secret which emphasized that Luther King would have died if he had sneezed. According to the doctor, the knife wound was precariously close to his aorta (the largest artery that can be found in the human body).

After learning about his near-death experience, Luther King jokingly remarked that he was grateful that he didn’t sneeze at that time. Towards the end of his speech, he touched on the bomb threats on his plane. At that point, it was apparently clear that Luther King knew his life was going to be short lived. In a speech to his followers, King saw himself as a Moses who would take his people to the Promised Land. In his mind it didn’t matter if he could not reach the Promised Land himself. To him, the will of the Lord had to be accomplished- racial discrimination in America had got to stop, and it had to stop now.

On 4th April 1968, Luther King lodged in room 306 of the Lorraine Motel- a magnificent hotel in Memphis ran by Walter Bailey (a businessman). King and his friend Ralph Abernathy, frequently stayed in that room of the motel whenever they were in  town for civil rights campaigns or speeches. At about 6:00 pm that day, Luther King stepped out onto his balcony. Little did he know that he was making his last step. Hidden somewhere, a sniper was readying himself to terminate the life of Martin Luther King (MLK). The sniper  fired a shot using a rifle. The bullet penetrated King’s right cheek and broke his jaw. The destructive impact traveled through his spines, cutting his major arteries, veins and vertebrae. That wasn’t all; the massive forces also tore off his necktie. Witnesses reported that King’s unconscious body went down on its back. 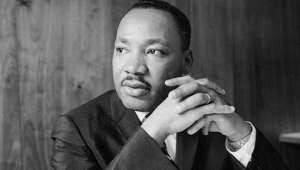 Luther King Jr. died at the age of 39 years.

There were claims by eyewitnesses that a man was seen, across the street, take to his feet shortly after the shooting incident. This man was later identified as James Earl Ray.

The blood-soaked Baptist Minister was taken to St. Joseph’s Hospital. Medical experts cut through his chest and tried to resuscitate him, but to know avail. The greatest civil rights activist was long gone. The man of God died of his gunshot wounds, an hour later (7:05 pm).

While he was 39 at the time of his death, cardiovascular examinations found that his heart condition was comparable to a 60-year old person. The unexpected condition of his heart led people to attribute it to the many years of stressful and near-death experiences Luther King endured while fighting for civil rights in America. He was buried in Atlanta, Georgia. It’s been estimated that bout 300,000 people attended his funeral.

It was confirmed through investigations that, James Earl Ray bought and registered the rifle using a fake name. He did that about 6 days prior to the shooting. When police searched the room from which Ray shot Luther King, they discovered a pair of binoculars, a rifle, and a package. Biometric analysis of the evidences matched the fingerprints to of James Ray. This revelation sparked a global manhunt for the attacker. Two months after the death of MLK, James Ray was arrested in London at the Heathrow Airport. He was arraigned before court and found guilty of murder. A 99-year prison sentence was given to him. Ray died in prison in 1998.

King’s widow, Coretta Scott, couldn’t believe that her dear husband was no more. Numerous telegram messages were sent to her by sympathizers. The black community of the U.S.A felt they had lost a Messiah. The sheer grief caused millions of people to go into deep mourning across the length and breadth of America and the rest of the world.

In the immediate aftermath of MLK’s death, riots broke out in over 100 cities in America. The US president at the time, Lyndon B. Johnson, called on America to put a stop to the inhumane deeds which took the life of an illustrious son of the US. He described Luther King as an “Apostle of Nonviolence”.

President Lyndon B. Johnson also urged the US Congress to hasten procedures to pass the Civil Rights Acts (the Acts eventually got passed during JFK’s presidency). It was the best way to honor the life and legacy of Martin Luther King. President Johnson endorsed the Fair Housing Act in April of that year. It was a breakthrough moment for subsequent legislation on civil rights. A national holiday in memory of Luther was signed in 1983 by President Ronald Reagan.

Despite the earlier plea of guilt by James Ray in March of 1969, the attacker later changed his mind and tried to reverse his admission of the killing by going to court. The plentiful pieces of evidence gathered at the crime scenes, including the biological fingerprints, led the US government not to take the reopening of the case seriously.