The Story of Moses 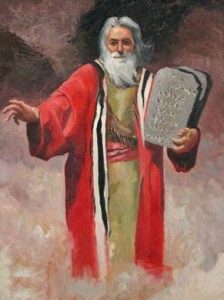 A painting of the prophet and legendary figure, Moses.

The Birth of Moses

Little Moses was still confined in his mother’s womb when his Israeli generation were held as slaves in Egypt. Under the watch of the malicious king Pharaoh, the enslaved Israeli people were tortured and made to undergo extreme manual labor. Pharaoh did this to prevent further multiplication of the Israeli community in Egypt. With the extreme punishment meted out to the Israelites, Pharaoh was confident that the Israelites would be weakened to an extent that they couldn’t rise against him.

To climax his maltreatment of the Israelites, Pharaoh ordered the killings of all newly born males of Israeli blood. Around this dangerous time of killings, Moses was born. Since his mum was a Hebrew (an Israelite), Moses was qualified to be killed by Pharaoh’s orders. To save the life of her newborn, Moses’ mother devised a great plan and hid Moses from the sight of the murderers, for over 2 months.

When the time of his child’s safety was running out, Moses’ mother placed her son inside a woven basket and pushed it into the running river waters. The basket stayed afloat with little Moses and moved with the water current of the river until it was discovered by a daughter of Pharaoh. Pharaoh’s daughter whisked the child to safety, named him Moses (Meaning: water-born), and identified its mother. Moses’ mother allowed Pharaoh’s daughter to raise up the child in the king’s house. Moses’ real identity was hidden from Pharaoh.

Moses Runs Away from Pharaoh

When the lucky Moses grew up, he witnessed for himself the cruel treatment of his fellow Israelites. In defense of an Israeli old man who was subjected to beatings by an Egyptian, the vexed Moses inflicted pains onto the Egyptian; the Egyptian eventually died of his wounds. This murderous act of Moses incensed King Pharaoh. He immediately hacked plans to have him killed. Moses ran for his life and escaped into the Midian desert. In the desert, Moses shepherded the flock of a priest (Jethro) and even got married to the priest’s daughter Zipporah.  He spent 4 decades wandering in the desert until he had a spiritual encounter with God.

The Call to Deliverance

As Moses tended the flock in the mountains, he chanced upon a bush on flames. But the bush fire was not burning down anything. It was a harmless spiritual fire. Then a voice spoke out to Moses from the bush – it was the voice of the almighty God himself. The voice outlined his plans to use Moses to free the Israelites from Egyptian torture. Moses was instructed to go and preach ONE God to the idol worshippers.

Initially, Moses doubted his confidence and worthiness to convey such a Godly message to Pharaoh and his people. God reassured Moses that his outspoken brother (Aaron) would help him deliver the message.

Moses Confronts Pharaoh with a Message

Moses made his way back to Egypt, met with Aaron and convened his people. Moses confronted the hot-tempered and hard-hearted Pharaoh with God’s message. He relayed to Pharaoh: God willed that the Israelites be freed from misery. However, Pharaoh just laughed off Moses’ God and vowed not to release the slaves. Pharaoh said he was the only known God and that Moses should back off with his wishes.

Unknown to him, Moses then showcased his divine powers by turning his own walking stick into a snake. But that was not enough to scare Pharaoh. He described Moses’ power as magical tricks. The hard-heartedness and unwillingness of Pharaoh to free the Israeli slaves forced Moses to invoke God’s wrath to visit Pharaoh and the Egyptians.

10 Plagues Hit Pharaoh and the Egyptians

Moses, working hand in hand with God’s power, used his stick (staff) to bring suffering onto Pharaoh’s people. The first plague showed its ugly face to Egyptians by turning their water bodies into blood. But Pharaoh did not give up.

Secondly, then came plenty of frogs which filled every corner of space in Egyptian homes. Interestingly Pharaoh’s stance didn’t change.

The third disaster came with lice. These parasitic insects came out in their numbers and greeted the Egyptians. The Egyptian magicians couldn’t replicate this miracle, so they tried to convince Pharaoh to give up. All was in vain.

When flies followed, Pharaoh temporarily agreed to free the Israelites, but he didn’t.

A skin infection (boils) introduced discomfort-into the bodies of Pharaoh and Egyptians. There was no sign of surrender.

Pellets of ice (hail) rained down heavily on all Egyptian lands and creatures. Pharaoh deceived Moses to put a stop to the hail plague, but he failed to release the Israelites.

Deep darkness then covered everywhere – it blinded the sight of Egyptians. The darkness was so severe that visibility was less than an inch.

The last plague was death itself; it killed all Egyptian first-borns (including Pharaoh’s son). The death angel spared the children of the Israelites as they were kept safe by the blood of a lamb they had smeared on their doors.

The pain was too much for Pharaoh to handle, so he finally released the enslaved Israelites – they were in bondage for over 400 years.

As Moses guided his people to the Promised Land in Canaan, they reached the Red Sea. At that point in time, Pharaoh and his men trailed the Egyptians closely. Moses used his stick and struck the sea waters – the sea divided and created a path for Israelites to pass through.

When Pharaoh’s men followed suit, the seawater closed back on them and drowned all of them. All Israelites were safe.  The lonely Pharaoh stared in anger and amazement as the Israelites departed joyfully and continued their journey to the Promised Land. 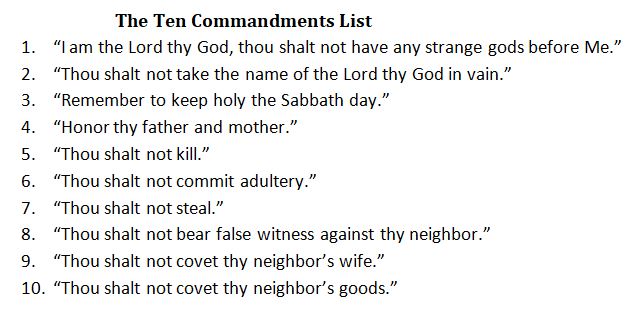 An image of the Ten Commandments (laws) in order

Following their triumphant exodus from bondage, God wanted his people to live righteous lives. So he wrote down 10 laws (Commandments) and called Moses to Mount Sinai. The mountain was engulfed in smoke, thunder, lightning, quakes, and fire. There he delivered the Commandments (written on a flat piece of stone) to Moses. On the mountain, Moses spent 40 days and nights with God.

When he finally went back to his people to read out the 10 Commandments to them, Moses was shocked. The very people God had freed, were now doing their own things – they were worshipping idols. To them, Moses had kept so long to return.

Moses got furious and smashed the commandments into the ground. He also destroyed the gold-plated calf that was being worshipped as a god. The Israelites who still believed in the Almighty God were spared but all nonbelievers (3000 people) were killed by God’s wrath.

Journey Continues to the Promised Land

After a 40-year trek through the wilderness, Moses and his people neared the Promised Land. Before that, they had severely worried Moses with too much complains about hunger, thirst, and meat. God answered the prayers of Moses and he bountifully fed the complaining Israelites. A tabernacle was built to manifest God’s everlasting presence.

The Promised Land and the Death of Moses

Despite God’s kindness, mercies love and superpowers and so on, some of the Israelites kept doubting Him. In the end, their disbelief angered God and he left them alone. With the exception of the young ones, all Israelites aged 20 years and above all perished – they didn’t reach the Promised Land.

Allegedly, Moses sinned against God, so he did not also make it to the Promised Land. He died on Mount Nebo, at the age of 120 years. Moses saw the Promised Land at a distance but he never stepped his foot there. The reason why God couldn’t forgive Moses still remains a theological mystery.